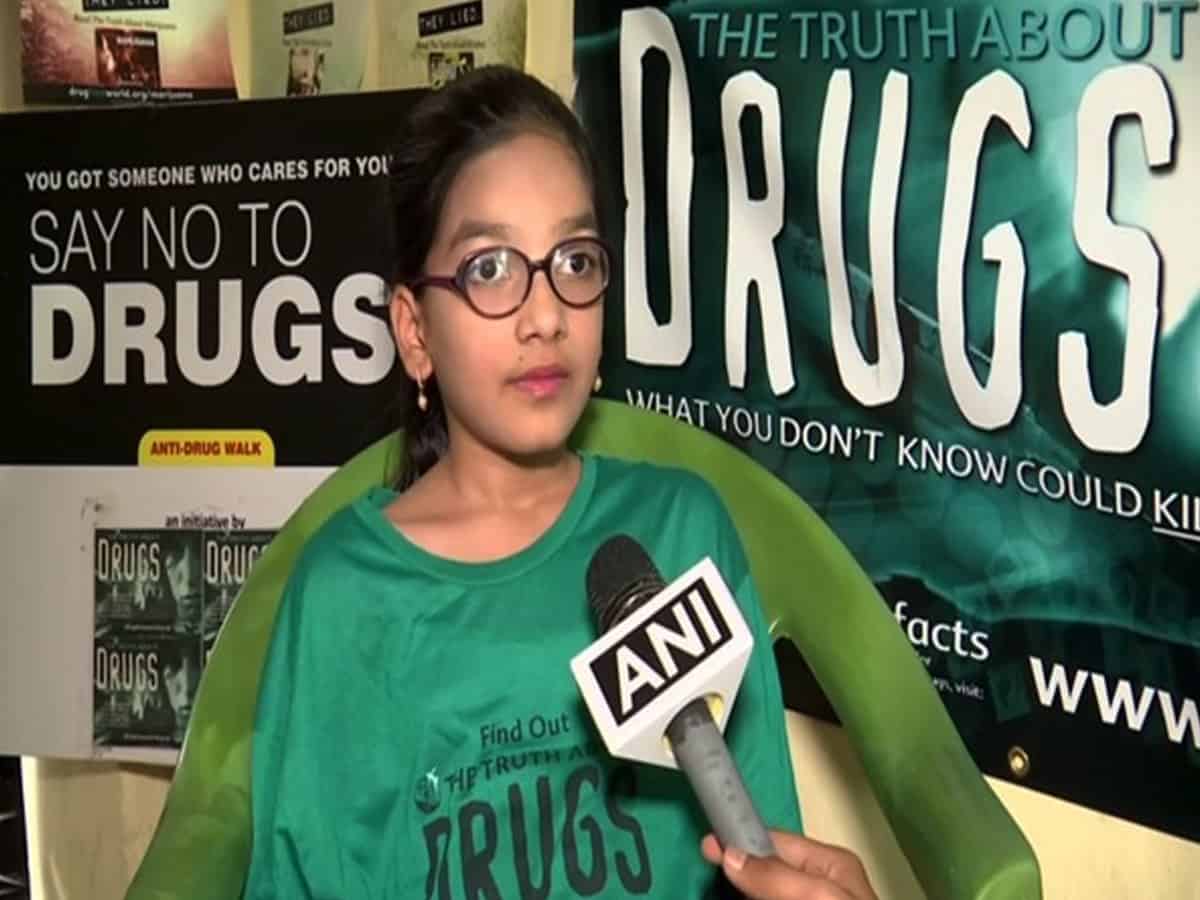 Hyderabad: Wishing to see a drug-free world, a 10-year-old Tanya begum from Hyderabad has been spreading awareness about their harmful effects.

A student of Class 4, Tanya Begum, has been raising her voice against drugs since she was five years old. After looking at various news articles and videos about the adverse effects of drugs, Tanya believes that drug-use is a serious issue and needs to be talked about in public.

“Many people, especially the youth, are getting addicted to drugs and are destroying both their health and future,” Tanya said, adding that she has decided to raise her voice against drugs by creating awareness among people about their injurious effects.

“After reading about various cases where youth were caught using drugs and seeing the way people get addicted, I realised that this is a serious issue that must be talked about in the public. That is why I have been campaigning against drugs, talking to various people and creating awareness among them,” Tanya told ANI.

At a tender age, Tanya developed an interest in this issue and has conducted various campaigns.

She said that her desire to fight for the cause was inspired by the father who participates in various campaigns to create social awareness.

“I participate in events and campaigns every Sunday by distributing booklets and explaining the adverse effects on one’s health. I try to tell them that any sort of drug can spoil a person’s health. I campaign in various schools and colleges across the city. I have distributed around 35,000 booklets,” she said.

In order to strengthen her zeal to create a drug-free society, Tanya has joined ‘Drugs Free World, India’. Tanya mentioned that she was successful in closing a liquor shop right in front of the school she goes to.
Furthermore, as a part of the campaign, she walks to every pan shop across Hyderabad as part of her campaigning against smoking.

“Drugs destroy and damage millions of lives every year. I dream about a drug-free environment. My goal is to fight against drugs until I see a drug-free society. I firmly want to bring awareness among people and help our society be free from drugs,” she said.

She further said, “Drugs are a serious issue and must be talked about.”

She added that apart from drugs, she campaigns for water conservation and other environmental issues by taking up the challenge ‘Hara hai toh Bhara hai’.

She also said that she campaigned for human rights. To further create awareness about traffic rules and regulations, she initiated a challenge called ‘Selfie with helmet, Papa’ that takes about helmets and their importance while riding bikes.

Speaking to ANI, Shaik Salauddin, father of Tanya Begum said, “I am proud of my daughter for her efforts in trying to create awareness among people over various issues. She has received a letter from President Ram Nath Kovind after she wrote to him about a social cause. She has also received an acknowledgement letter from the office of Vice President M Venkaiah Naidu. Her works have been appreciated by many leaders of India.”