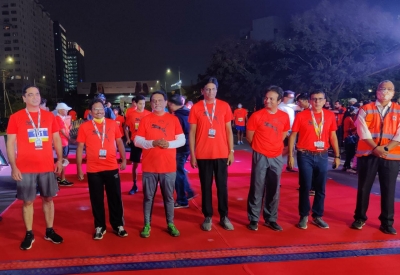 Hyderabad, Jan 24 : Enthusiastic participation by youngsters and those young-at-heart was on display in the 10km and 5km runs organised on Sunday at the Durgam Cheruvu cable-stayed bridge, a new landmark in Hyderabad, to mark the National Girl Child Day.

Over 1,000 people participated in the first-ever running events held on the bridge, which was thrown open to the public in September last. A large number of boys and girls were among the enthusiastic participants.

Speaking on the occasion, he said that the runs were organised in association with various non-governmental organisations to focus on girls’ education. He noted that Hyderabad as the most livable city in India is also emerging as the world-class city.

Jayesh Ranjan, Secretary, Industry, Commerce and IT, flagged off the run for the differently abled.

It was in September that the bridge across Durgam Cheruvu lake in Hitec City, the information technology hub, was thrown open.

Termed as an engineering marvel, the 233.85-metre-long bridge, is the new recreational point and tourism attraction in the historic city.

Meanwhile, Arvind Kumar also announced that a qawwali programme by Warsi brothers will be held at Moazzam Jahi Market at 6.30 pm on January 25.

Organised jointly by Greater Hyderabad Municipal Corporation (GHMC) and Municipal Administration and Urban Development Department, ‘Shaam-e-Suffiana’ or Sufi evening is a free event but pre-registration is a must in view of the limited number of seats due to social distancing norms.

Moazzam Jahi Market, one of the major landmarks in this historic city, was reopened after renovation in August last year. The authorities have announced plans to transform it into a cultural hub.

The renovated heritage structure, with a repaired ceiling and flooring, a restored clock tower and a flag post in the interior courtyard for hoisting the Tricolour, was thrown open on the eve of the country’s Independence Day celebrations in August 2020.