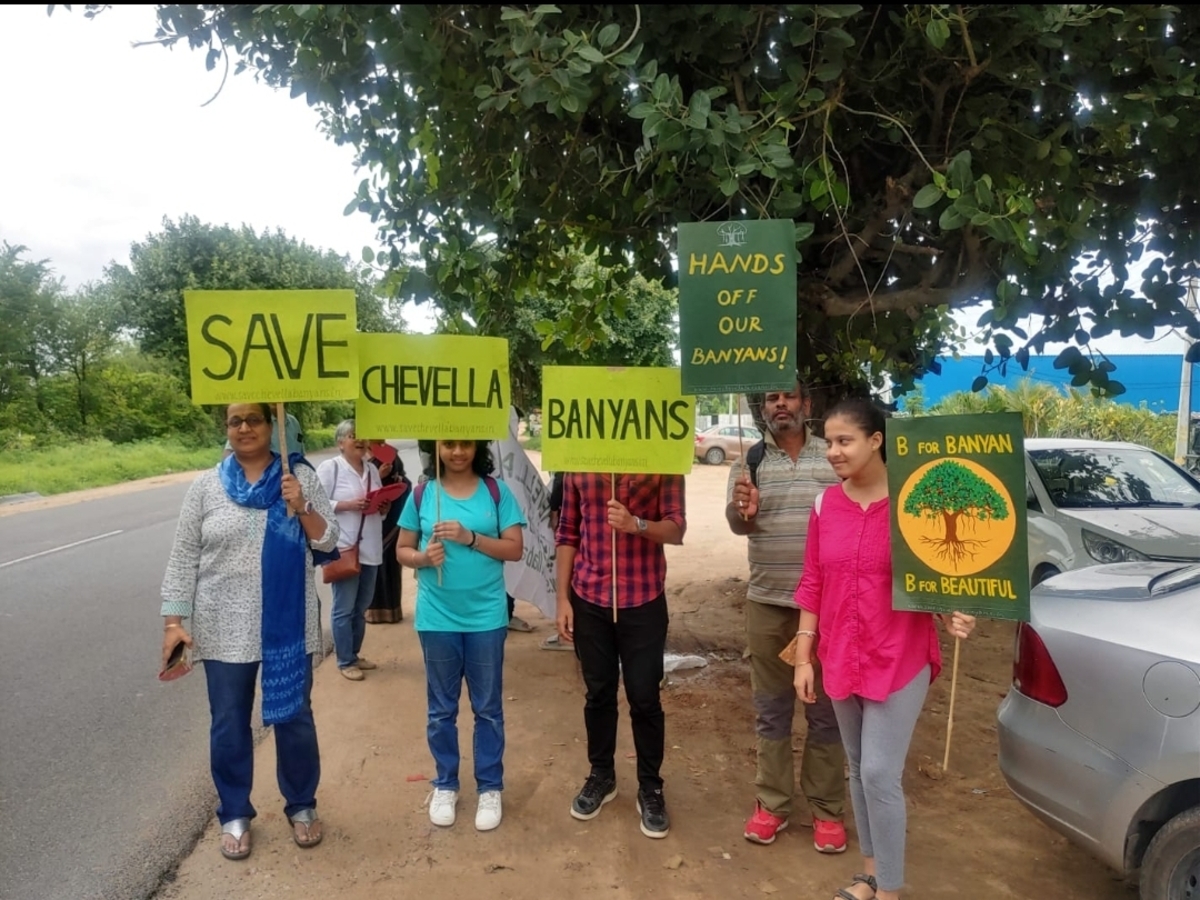 Hyderabad: In two separate protests on Sunday, residents of the city gathered at National Highway (NH) 163 to protest the cutting down of Chevella’s 914 banyan trees. While this is hardly the first time locals have protested to “Save chevella banyans”, there has been little to no response from the Telangana government which is continuing with its road expansion plans to the detriment of the trees.

Around 30 cyclists protested the potential harm which could befall the Chevella banyans on Sunday morning while the afternoon witnessed 30 others protesting for the same. The protestors argued that the trees were far too valuable to be chopped down.

“While there is no documentation, oral accounts of history discuss how the trees were planted during the Nizam era. The banyans are at least 75-80 years old and could be older,” says Natasha Ramarathnam, one of the protestors and a development consultant based out of Hyderabad.

In 2019, the state government of Telangana decided to axe down the banyan trees lining the NH-163 from Moinabad to Manneguda. Activists and nature enthusiasts in the city cried hoarse at the government’s decision and till date are trying to get the state government to grant heritage status to the trees.

Under the banner of Nature lovers of Hyderabad, several well known city activists have pointed out how cutting down of the trees or even translocating them, would be perilous.

“It is alright to translocate young banyans. However, considering how old the Chevella banyans in question are, it is unlikely that they stand a chance of survival if the Telangana government and the National Highways Authority of India (NHAI) goes forward with its road expansion plans,” Natasha informed Siasat.com.

Simply put, the state government is planning on doubling the width of the road from its existing two lanes and widen it to make a four lane road. The Nature lovers of Hyderabad opined that the road expansion could be achieved if instead of the existing plan, the NHAI constructed two roads on either sides.

While the proposal to expand the highway was announced in 2019, residents of Hyderabad put together a petition which garnered over 38,000 signatories. Currently, the petition has over 62,400 signatories. The petition has been addressed to Telangana chief minister K Chadrashekar Rao, IT Minister KT Rama Rao, Nirmal MLA A Indra Karan Reddy, Principal chief conservator of forests PK Jha and the Union minister for Road Transport Highways and Shipping, Nitin Gadkari.

The petition demanded that the road expansion take place on either sides of the trees bypassing the banyans and further asked the Ministry of Road Transport and Highways to declare the stretch of highway till Vikarabad, as the Telangana biodiversity heritage road.

At the time of writing this article, there has been no response from the state government vis-à-vis the protests.