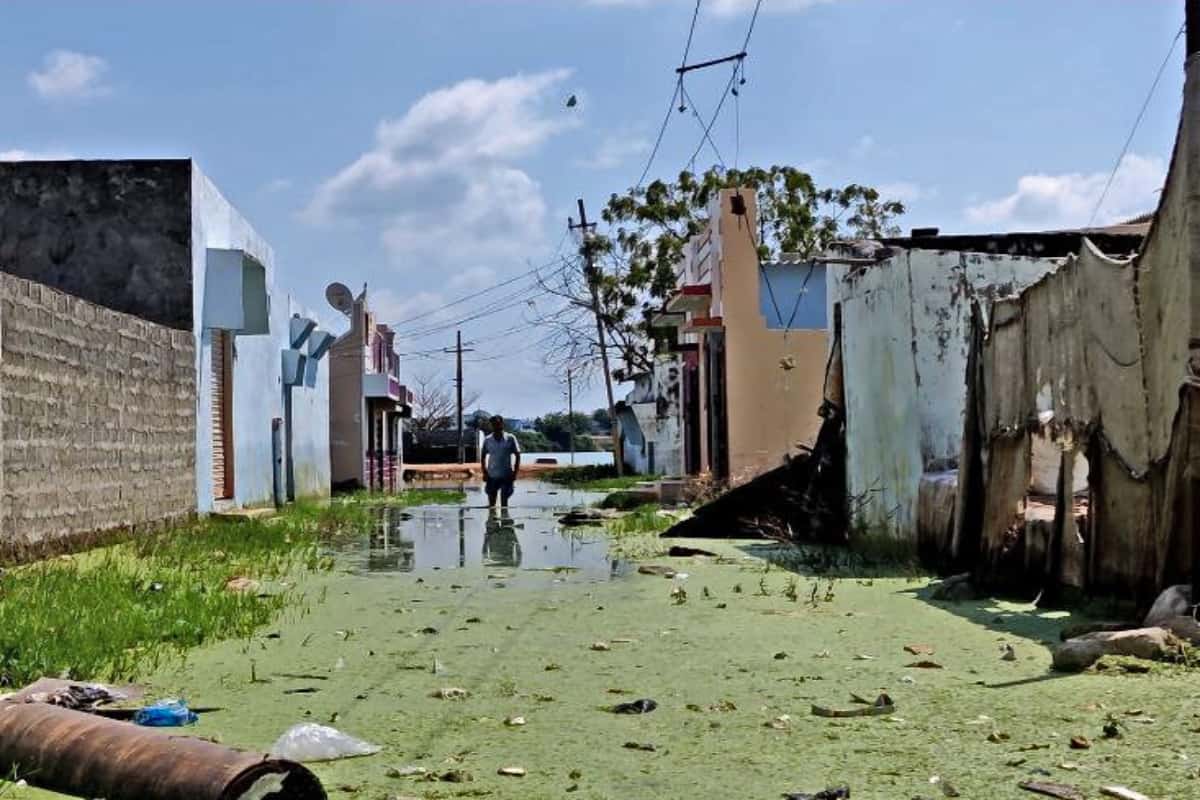 Hyderabad: Life has come to a standstill for Mohammed Majid ever since his home and locality of Osman Nagar were submerged in floodwaters last year in October. His house and Omni van on the bank of a lake nearby are still submerged in water. The hapless young man rented a new house 500 metres away eventually, but fate was not looking at him too kindly even this year.

Last week, heavy rains for a few days brought on by cyclone Gulab led to a rise in water levels, which never receded fully in Osman Nagar since last year. The last spate of rains in the area has left about 10-feet of water even now. In total, there are 1500 people in about 300 houses there, most of whom have been rendered homeless.

As of now, many have emptied their homes and left. Some have gone to stay with their relatives, others have just left. The situation is beyond painful, given that many people there had put in their life savings to purchase small parcels of land, all of which is now underwater. The floods are a result of the Osman Nagar lake flowing into the colony, which has been built in the full tank level of the lake.

Families living in Osman Nagar are mostly daily wage labourers. Farzana Begum is one among them, and before last year’s floods, she had a bicycle rental business. However, the inundated water in her house led to all her bicycles getting rusted. Today she works as a house help and makes some money.

And due to the constant inundation from the last one year, the foundations of Majid’s house are also gradually worsening. The rains in September have left homes submerged in five to 10 feet of stagnated water, filled with algae and whatnot.

The chaotic Hyderabad floods of 2020 was a life-changing catastrophe for the working families of Osman Nagar. All they have seen is empty words by a few politicians and a few local NGOs who dropped by once in a while with food packages and rations. People have lost homes that they’ve worked all their lives to build.

Some who have lived in the locality for 25 plus years have been labelled ‘encroachers’ by media and politicians, and others have been constantly wrestling with diseases, mosquitoes, snakes and power shortages.

One of the locals there who couldn’t afford to migrate out still lives in the house of a neighbour whose house is in four feet of water (as against 10 feet). “It is still livable compared to my own house which is 10-feet underwater,” remarked Majid.

He further said that the water can be drained away immediately. “However, there is a VIP gated colony nearby, American Township which would have to go through some “inconvenience” for that,” Majid claimed. Other locals claimed that this is an attempt by politicians and construction companies to coerce them to sell off their properties at a very low price so that a “sophisticated” gated community can be built there.

“All these properties were all bought by the permission of the government. The allegations of encroachments are completely false. I have all the papers to prove my claim,” said Majid. Osman

The garbage, overflowing drains, and knee-deep stagnated algae water after rains, have turned the whole area into a breeding ground for vector-borne diseases, particularly dengue and malaria.

Speaking to Siasat.com, Zehra Fatima, another resident said, “Both of my sons were affected with dengue and was admitted to Niloufer Hospital for eight days. We don’t have a government primary health care centre we have to go outside Osman Nagar to see a doctor, and here we have limitless mosquitoes. In the last one year, no one from the municipality has come for fogging”.

Apart from ruined homes and wrecked lives, now the people of Osman Nagar are confronting a new challenge as receding waters leave behind a glut of snakes and other creatures that people rarely come face to face with as well.

Sohail Ahmed, another resident said, “As the area is waterlogged numerous snakes are wandering in the area, many times the snakes have entered our houses, we can’t afford to leave our children unattended for a minute, as our main gates are damaged due water snakes finds it easy to enter our home”.

Due to knee-deep slush, all residents also suffer from fungal infections which are causing itching and rashes. One more resident, Shaheen Begum, has in fact kept a ladder at the backside of the house as the main entrance is surrounded by slush and sewage due to overflowing drains.

On being asked why she uses a ladder unlike other residents who walk in deep slush, she said, “I’m suffering from severe fungal skin infection, so I got the ladder. This is the only alternative that I could afford to arrange”.

No solution in sight

Residents of adjoining areas of Osman Nagar say it takes months for the water level to recede on its own. Earlier, the government reportedly assured that a proper channel would be laid for the flow of floodwater, but nothing has been done in this regard. No action is taken on the ground to date to provide safer shelter to the affected people.

The local member of the legislative assembly (MLA) is state education minister Sabitha Indra Reddy, who visits the area every two months to check on the people. However, some allege she visits only “to check for herself if everyone has left the place or are at least ready to sell off their properties” after having gone through enough suffering.

They feel they have been abandoned by authorities. On October 4, Akbaruddin Owaisi leader of All India Majlis-e-Ittehadul Muslimeen (AIMIM), and MLA from Chandrayangutta, raised the concern of Osman Nagar lake in the Telangana assembly. He urged the ruling government Telangana Rashtra Samithi (TRS) to take cognizance.

The residents near Osman Nagar lake appealed to well-wishers and philanthropists to visit the place and help them out in whichever way possible. If anyone wishes to help them in any way, they may email [email protected]