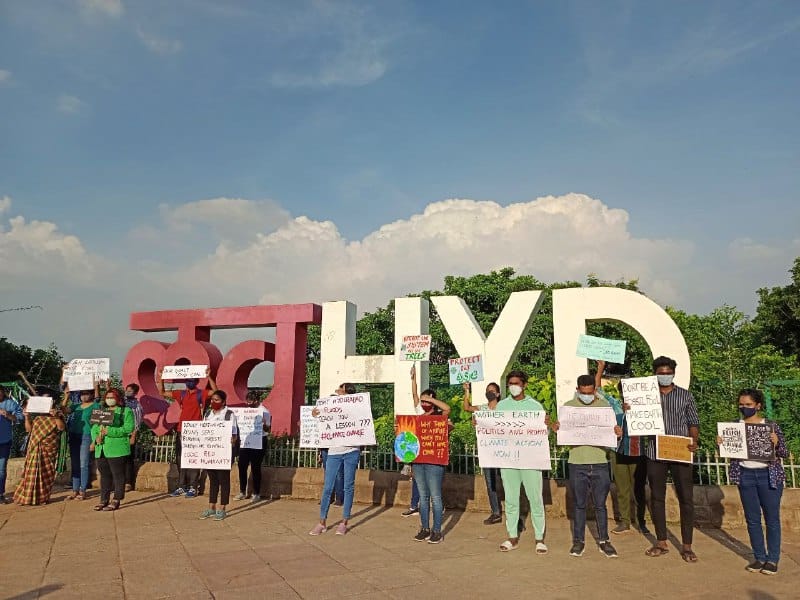 Hyderabad: In an absurd move, the Hyderabad Metropolitan Development Authority (HMDA) fined a young climate activist from Fridays for Future (Telangana) Rs 11,800 for organizing the ‘Global Climate Strike’ on September 24. Activists are enraged at the HMDA for forcing a youngster to pay the civic body money, given fact that money is collected by the civic body only for commercial activists, and not for such things.

The event was held in fact with police permission to highlight the global warming at the Luv-Hyderabad sign, at People’s plaza. The activist, who requested anonymity, said she is enraged with it because there is no provision on the HMDA website to pay such an amount for just organizing a strike.

According to the HMDA website, rents are to be collected only for film shootings and other events which generate money from the public, and the rent for a day is Rs.1 lakh. Rs 10,000 plus GST of Rs 1,800 rent is taken for the shooting set up, which has to be done a day prior before the shoot.

The same prefix rate of Rs 10,000 plus GST of Rs 1,800 was charged from the young climate activist. Speaking to Siasat.com Ramulu the public relations officer (PRO) of HMDA said that there is no such provision to pay Rs.11, 800 for organizing a protest.

The activist was with her parents at the venue at 4:00 p.m. on September 24, when two men arrived and demanded to pay Rs.11, 800 to HMDA. Then she was made to speak to Shyam Sundar, an administrative officer of Buddha Purnima Project (BPP), who cited the HMDA rules and said the rent of the venue is Rs.10000+GST Rs 1,800. He reportedly told the activist that it had to be paid immediately or else the authority won’t let anyone stand there.

Helpless parents of the activist did not want to let down their daughter and other youngsters who had gathered there for a noble cause. They did not have money in the bank but they had cash, so they gave Rs.11, 800 without any receipt.

Siasat.com spoke to the BPP administrative officer, Shyam Sundar, and he contradicted the HMDA PRO and asserted that there is a provision on the HMDA website. When asked to show the provision he hung up the phone.

On demanding a receipt for cash given on September 24, the activist was given a challan counterfoil paid to HMDA dated September 27. When asked for HMDA receipt with the bifurcation of Rs.10,000+GST of Rs.1,800, they said no such receipt is available and counterfoil of challan paid in the bank is itself a receipt.

The activist checked the HMDA website, she didn’t find any provision or clause which says that anyone organizing a protest has to pay Rs.11, 800. She was reportedly harassed and felt “looted” by the HMDA. When the father of the activist came to know that he had paid the amount unduly with his hard earned money, he submitted a letter to HMDA and BPP on September 29, to refund the Rs.11, 800 which HMDA took unethically.

Dr Lubna Sarwath, an environmentalist in an open letter demanded the HMDA to return Rs.11,800 and also handover Rs.1 lakh as compensation to the parents of the young activist who underwent trauma and embarrassment as they had not come prepared with an amount.

“We shall also approach the commissioner of HMDA and vigilance department, and the Consumer grievance redressal, and the DGP of Telangana, to issue notice to HMDA for serious dereliction of duty and causing harm to the public,” Sarwath told siasat.com