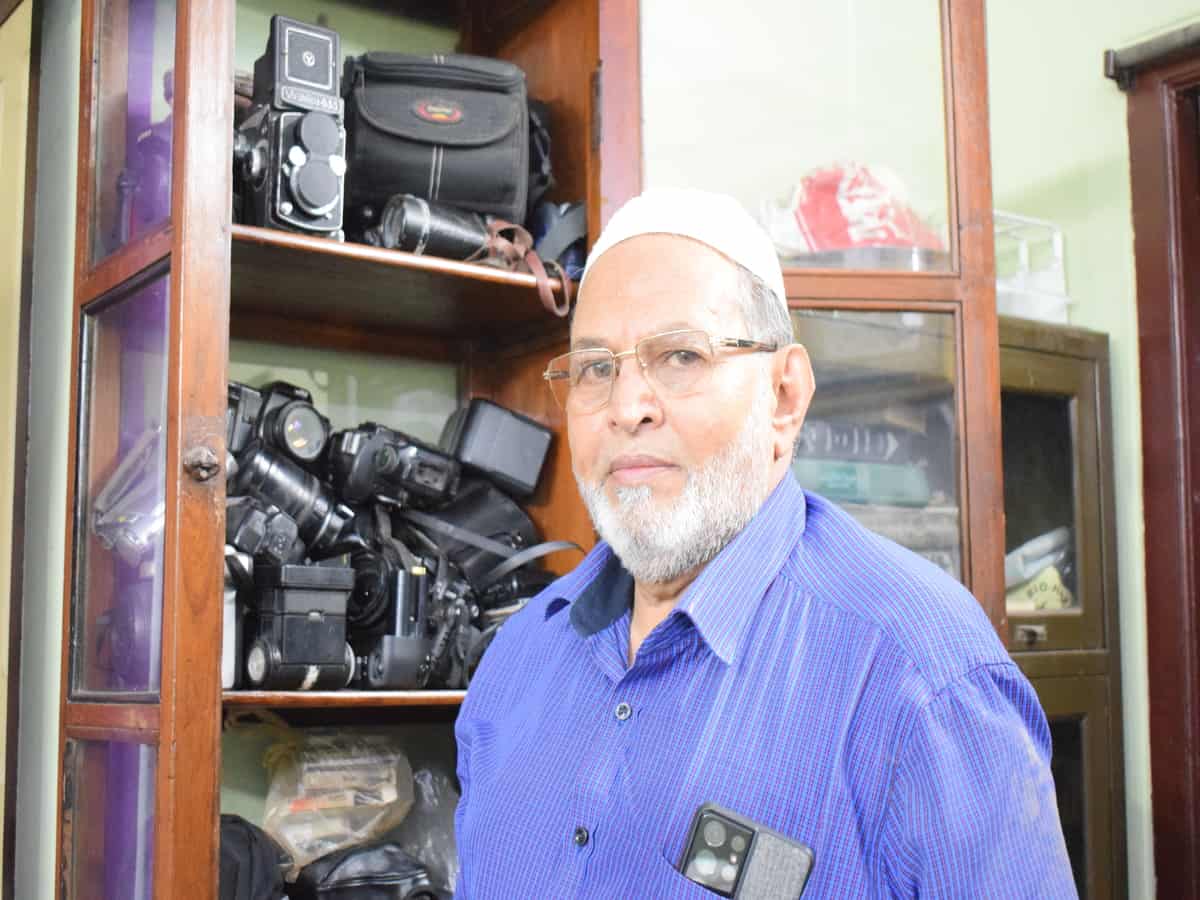 Hyderabad: While passing through the magnificent roads of Hyderabad’s old city, one might notice quaint antique stores settled in the corners, offering a peek into the past. From resplendent gramophones to passe typewriters, almost everything of historical importance is stored in these shops.

However, with the growing technology, these stores, have failed to garner interest from passers-by in the past few decades and are on the brink of closing down.

Situated in the dingy lanes of bustling Hussaini Alam, ‘Ahmed Camera Ghar’ offers a glimpse into the rich history and evolution of cameras with a collection of nearly 4000 cameras, ranging from cameras of the bygone era to the latest cameras of the 21st century.

65-year-old Ahmed Ali Khan, a photography enthusiast, started his love affair with cameras at the young age of 16. He looks back at the golden times when he used to buy disposable cameras at a mere Rs 25 per piece. Although a talented photographer, Khan makes it known that he never professionally pursued the art and would only capture his friends and neighbourhood weddings as a hobby.

While tinkering with one of his favourite Minolta cameras, Ahmed Ali Khan reminisces, “Since childhood, I have always been surrounded by cameras as my grandfather, Mahtab Ali Khan, was already in the antique business, and my father had followed suit. I was 16 when I started toying with the idea of collecting cameras. The mechanisms of a camera and photography used to fascinate me a lot.”

“I used to travel to Bombay (Mumbai) and Madras (Chennai) every 15 days, hoping to find antique cameras. In Hyderabad, I have found a treasure trove of antique cameras by attending the J Moosa auctions and visiting the markets near Charminar,” he recalled fondly.

At Ahmed Camera Ghar, one can find all sorts of working cameras, varying from Leica, Hasselblad, Rolleiflex, and Yashica to the earliest and most recent editions of Olympus, Fujifilm, Nikon, Canon, and Sony. Until recently, he used to sell his cameras ranging between a mere Rs. 500 to a whopping Rs. 1-2 Lakhs.

“Mera collection dekhne log dur dur se aate the. (People used to come from faraway places to see my collection),” taking pride in his collection, Khan boasts, “I have many cameras and lenses, which are over 120 years old, including Raja Lala Deen Dayal’s Linhof Master Technika Camera, which was gifted to me by his granddaughter-in-law. I also have motion picture cameras from the 1950s and 60s.”

Unable to store the vast amount of cameras and lenses in one location, Khan has spread out his collection in seven warehouses around the city. However, these days he finds it quite hard to manage the overwhelming amount as his customer base has been reduced to a very few.

Referring to the smartphone era as the era of “tabahi”, Khan holds a grudge against the growing technology and owes it to the loss in his business. “No one wants to buy tattered cameras when you have a 100-megapixel phone at your disposal,” said Ahmed Ali Khan with a wistful laugh.

Apart from his penchant for cameras, Ahmed Ali Khan is also an avid collector of various other antiques. Ask him about it and he has various tales to narrate about his radios, LP records, typewriters, gramophones, written scriptures, jewellery, crockery, and furniture, which is dated to the 20th century.

Will he be opening his collection for public display? Khan says he enjoys keeping it private.