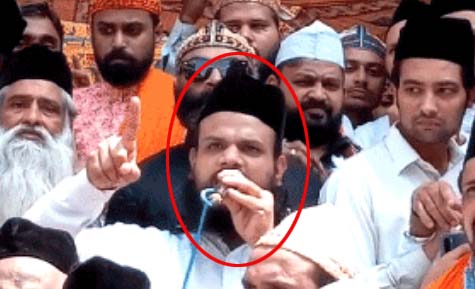 Hyderabad: Ajmer Dargah Khadim Syed Gauhar Chishti, who had allegedly given a slogan outside Ajmer Dargah on June 17 calling for the beheading of now suspended BJP leader Nupur Sharma for her remarks on Prophet Mohammed was arrested from Hyderabad on Thursday.

Taking cognizance of the speech, the Ajmer police registered a suo-moto case against Gauhar Chisty and launched a manhunt for him.

On Thursday morning, after receiving a tip of information about the presence of Chisty in the Begum Bazaar area, a team of Ajmer police from Rajasthan arrested him and he is being shifted to Ajmer on a transit warrant.

In recent times, another cleric of Ajmer dargah, Salman Chisti, had allegedly announced a bounty on Nupur Sharma’s head for her controversial remark against Prophet Mohammad and he too was arrested.

After the incident of the tailor’s murder in Udaipur on June 28 by two Muslim men. tension has gripped Rajasthan. The victim, Teli, was allegedly murdered for supporting Nupur Sharma.

The tailor was attacked by Riyaz Akhtari, while his accomplice Ghouse Mohammad recorded the murder on a phone and the video was later posted online. The National Investigation Agency (NIA) has until now arrested seven accused in the case.