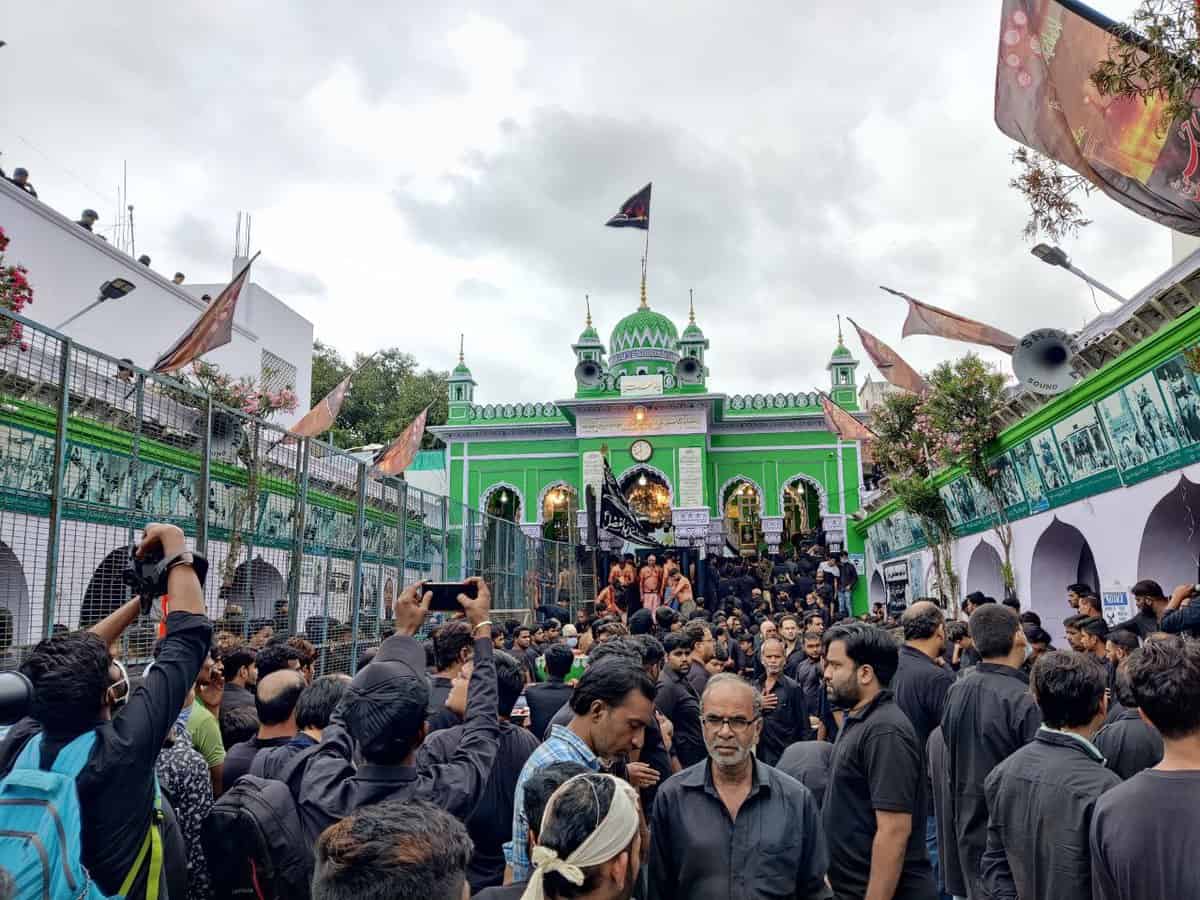 Hyderabad: With just a day or two left for Youm-e-Ashura, the tenth of Muharram, an air of solemnity has engulfed the old city. The mood, ambience and attire are black all the way. Grief-stricken men and women can be seen moving barefoot in the areas such as Darul Shifa, Yakhutpura, Noor Khan Bazaar, Mandi Mir Alam and Irani Galli.  A visitor to these areas wouldn’t miss the pall of gloom hanging there.
The present wet spell is no deterrent to the mourners who go about their job. As dusk sets in, the Ashoorkhanas and Majalis reverberate with unbridled emotions. Some shed silent tears, some wail aloud and some resort to ‘seena-zani’ – beating their chests to the cries of ‘Ya Husain’.
If gaiety and gusto marks Ramzan, poignancy takes over Hyderabad in Muharram.

Right from the Qutb Shahi times, the first month of Islamic calendar sees intense mourning. Shias lament the martyrdom of Hazrath Imam Husain, the grandson of the Prophet, and 72 others in the battle of Karbala in Iraq during the 7th century AD. The community goes for ‘tark-e-lazzat’ (abstinence), and gives up all culinary delights and celebrations during the 68-day mourning period.

There are about 125 Ashoorkhanas in the city and they become centres of Azadari  (lamentation). Also known as Asthanas, Bargahs and Imambaras, they served as a hub of socio-cultural activity during the Qutb Shahi period.  They are believed to be responsible for the evolution of marsiya, a form of poetry with the tragedy of Karbala being its leitmotif.

The Badshahi Ashoorkhana built by the city founder, Mohammed Quli Qutb Shah, is the oldest one in the city. Old Hyderabadis recall how it used to be decorated with 10,000 lamps placed in ten rows. The Sultan would light 1000 candles everyday during the first 10 days of Muharram. Today it doesn’t enjoy the same patronage but remains an example of a living heritage put to functional use during the month of mourning.

The second prominent monument to come up in 1594, just three years after Charminar was built Badshahi Ashoorkhana continues to charm visitors with its exquisite enamels tiles and vibrant colours. Though some ancillary structures in the open ground like Naqar Khana, Abdar Khana and Niyaz Khana have suffered intense damage, however, the main hall of the Badshahi Ashoorkhana remains intact.  Walls decked up with multicoloured tiles and the dominant theme of flaming Alams is the cynosure of all eyes here. A mosaic of staggered hexagons with jewel-like shapes fills the arch on the southern wall. Typical Indian colours like mustard yellow and brown add vibrancy to the panel on the western wall while the north-west wall sports a large ‘Alam’ in the centre of the side panels. A circling swirls of flowers and leaves surround the compositions.

All is set for the historic Bibi Ka Alam procession taken out on a caparisoned elephant to mark the tenth of Muharram. A she elephant, Madhuri, has been procured from Kholapur in Mahrashtra for the purpose on the request of the HEH The Nizam’s Religious Trust, custodian of the Bibi ka Alam. A rehearsal was already carried out on August 5 on the procession route and the 38-year old pachyderm was found to be perfect. It is currently housed in the Nizam’s palace at Purani Haveli.

However, some Shia members are unhappy with the ‘poor arrangements’ made by the government this Muharram. Despite repeated representations, approach roads to the Ashoorkhanas have not been laid as in the past. “Even patch work on the roads is not taken up on the plea that it is a rainy season,” says Syed Hamed Hussain Jafferi, president, Telangana Shia Youth Conference.

Further the government has not released the usual maintenance grant for the upkeep of the Ashoorkhanas. In a meeting held on July 16 with the Wakf Board in connection with the Muharram arrangements, the Shia members demanded sanction of Rs 5 crore on the lines of the Bonalu festival for which the government released Rs. 15 crore. “Except for the temporary tin sheds put up at Badhshai Ashoorkhana and Bibi ka Alawa by the GHMC nothing has been done this time,” laments Jafferi.