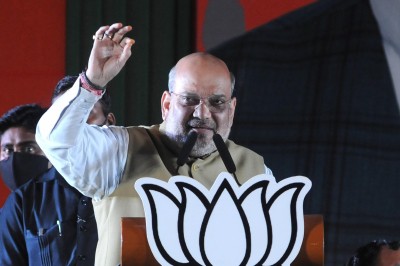 Hyderabad: Union home minister and ex-BJP national president Amit Shah will attend a rally at Nirmal in Telangana on September 17 to mark ‘Telangana Liberation Day’. The date holds significance as the erstwhile state of Hyderabad, run by the last Nizam Osman Ali Khan, was annexed to India by a military offensive called ‘Operation Polo’ on that date in 1948.

Bharatiya Janata Party (BJP) Telangana chief Bandi Sanjay, who is currently on a Padayatra across the state, will also take a break and attend the rally with Amit Shah. Sanjay, who is also the member of Parliament from the Karimnagar Lok Sabha seat, has been demanding the ruling Telangana Rashtra Samithi (TRS) to observe the same on September 17 and had often accused TRS supremo and chief minister K. Chandrasekhar Rao (KCR) of speaking in favour of the Nizam.

While the BJP has been raising the issue loudly ever since Telangana became a separate state in 2014, it may be noted that the saffron party had no part to play in anything in 1948 as far as the erstwhile state of Hyderabad in concerned. The BJP, regardless of what it claims, was non-existent then, and the actual players were the Congress, Communist Party of India (CPI), Arya Samaj and other organisations.

The term Liberation Day is perhaps even a malicious term aimed at painting the Nizam’s rule as continuation of ‘occupation’ of formerly Princely State of Hyderabad. The date marks the day when the erstwhile state of Hyderabad, which comprised Telangana and parts of Maharashtra and Karnataka, was annexed to India through the military action called Operation Polo or Police Action.

While the Rashtriya Swayamsevak Sangh (RSS) had been active, its role was very limited given the fact that in Telangana it was the Communist Party of India (CPI) which had taken over most of the rural areas. The CPI in fact organised the ‘Telangana Armed Rebellion’ against state-appointed Jagirdars, the landholding class that comprised both Hindus and Muslims.

It was essentially an uprising against feudal landlords by peasants in the state. The Telangana rebellion continued even after Operation Polo, which resulted in the army going after the communists. CPI leaders often state that many of its cadres were sent to jail until 1951. However, the matter was resolved after the CPI decided to call-off the struggle on October 21, 1951 (Telangana People’s Struggle and its lesson: P. Sundarayya) and contested the first general elections.

The last Nizam was made Rajpramukh after Police Action. There was a military government for about 18 months, after which the Hyderabad state got its first elected government in the 1951-52 general elections with Congress leader Burgula Ramakrishna Rao being its first chief minister. The state existed until 1956, till it was divided on a linguistic basis, and the Telangana region was merged with the Andhra and Rayalaseema regions to create the joint Andhra Pradesh state (1956-2014).