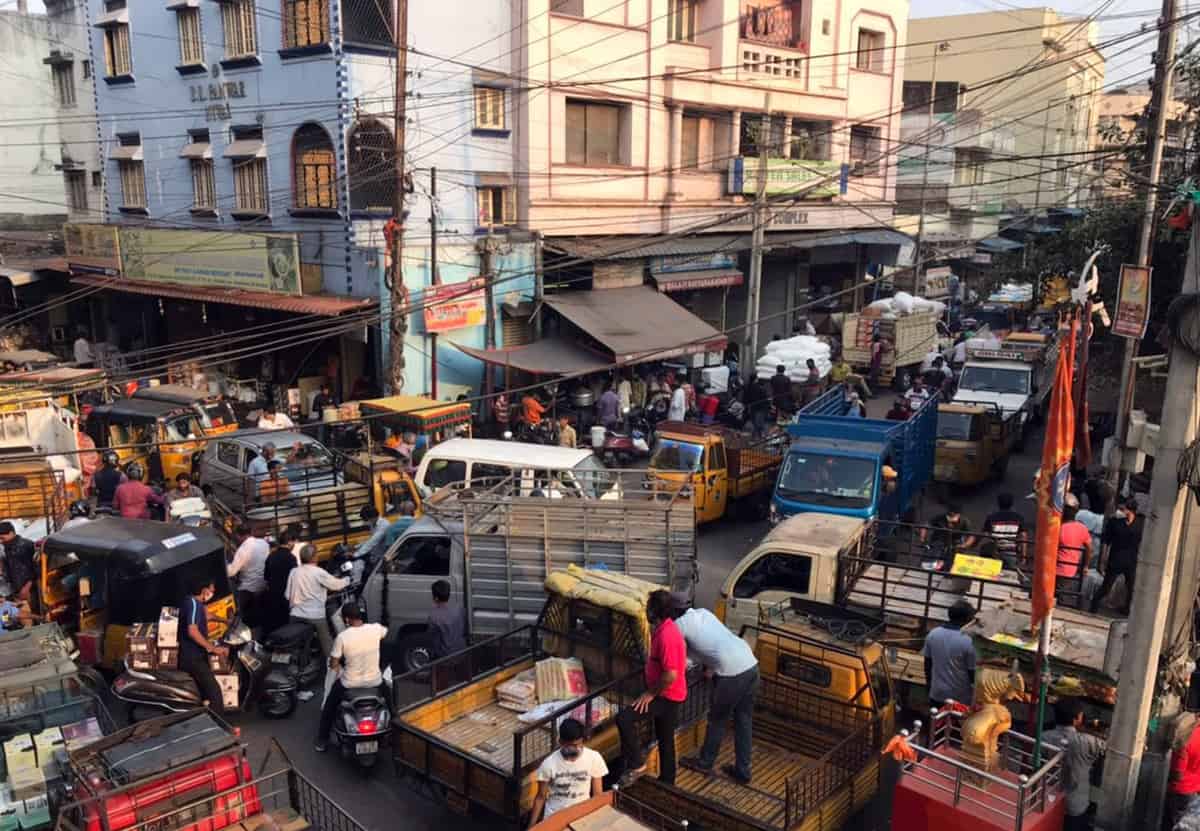 Hyderabad: Two days ago the Hyderabad Kirana Merchant’s association announced that it would have a self-imposed shutdown at the Begum Bazar market from 5 p.m. daily in view of increasing COVID-19 cases. However, it seems shopkeepers in the commercial area are not interested in following the diktat, as most places are open as usual.

A visit to the area by this reporter on Saturday made it clear that most shop owners were not interested in downing shutters by 5 p.m., as they were apprehensive of incurring losses. Shubham, who runs a shop at the Dry fruit junction said that the association didn’t consult all shopkeepers before announcing this decision. “Customers don’t come between 11-5 pm because of the summer heat,” he pointed out.

Many others said that they have in fact brought in new stock for Ramzan, and also pointed out like Shubham that customers only come out to shop in the evenings due to the heat. “The association people themselves are keeping their shops open after 5 p.m. so why would anyone else close their shops?,” questioned a Kirana shop owner said, who requested to keep identity confidential.

Another establishment owner, also requesting anonymity, also remarked that the association owners “should lead by example” and even claimed that the secretary, vice president and other office bearers of the association are keeping their shops open. “Then why should others damage their business by listening to these hypocrites?” he too questioned.

The Begum Bazar market area is one of the busiest commercial places in Hyderabad, and it is almost impossible to maintain physical distance there in any kind of way. One would have to either vist the area during peak summer heat in the afternoon to avoid being around many people. Evenings however are choc-a-bloc with people.

And with Ramzan around the corner, it will be impossible to stop customers from going there. Moreover, after months of economic hardship last year due to the COVID-19 lockdow imposed last year, it will be nearly impossible for businesses to survive, let alone recover losses, many shop owners feel.

“We have already ordered the stock for Ramzan and it’s business season now. We can’t bear any more losses,” said Shivkumar who runs a general store at Begum Bazar. He added that it will however also take a few days more for shopkeepers to adjust to this self shutdown system, and even for customers to know about it.

A pan shop owner there, Shaikh Kareemuddin, however was not convinced. “It is easier said than done and will affect business. Ramzan is a time when people come to shops in the evening after breaking their fasts, so it is more logical to have a day time shutdown instead of an evening one,” he opined.

However, it may be noted that though most of the shops were open at Begum Bazar, some shops did abide by the decision of the Kirana association and closed their shops. Most of the establishments there are now closing between 8-8:30 p.m., it is observed.

On April 8, the Hyderabad Kirana Merchant’s Association at Begum Bazaar has unanimously passed a resolution to restrict the business hours from 9 am to 5 pm. The decision for a self-imposed shutdown came amidst a sharp spike in COVID-19 cases in the city and state from the last 10 days or so. On Saturday, close to 3,000 new cases were reported in Telangana.