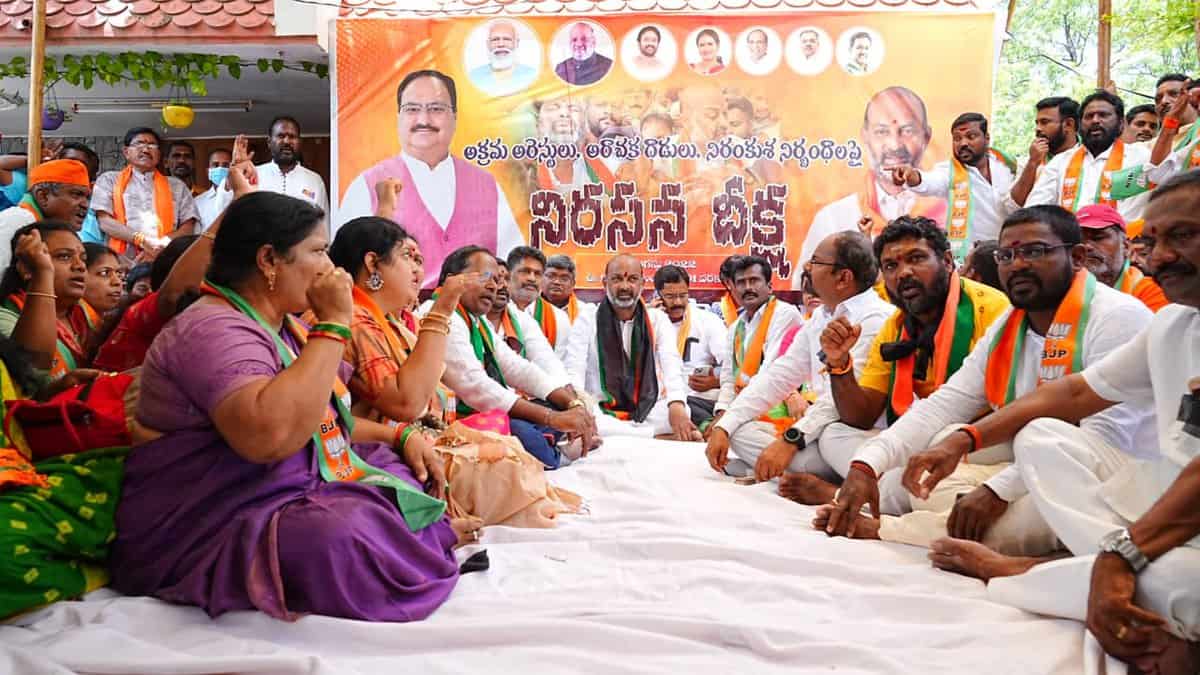 Hyderabad: The Bharatiya Janata Party (BJP) on Wednesday staged protests across Telangana against the arrest of its state president Bandi Sanjay and other leaders.

Top state leaders of the party sat on protests in district and mandal headquarters.

Bandi Sanjay, along with his supporters, sat on the protest at his residence in Karimnagar town. He vowed to continue his Praja Sangrama Yatra despite the police direction to stop it immediately.

Laxman, who is also president of BJP’s OBC Morcha, alleged that Chief Minister K. Chandrasekhar Rao was scared to see the huge public response being received by Praja Sangrama Yatra and hence resorting to illegal arrest of Bandi Sanjay.

Laxman also alleged that since allegations have come against Chief Minister KCR’s daughter Kavitha about her involvement in Delhi liquor scam, KCR was trying to divert public attention.

Muralidhar Rao said corruption scandals of KCR and his family members will be exposed one after the other. He alleged that the TRS government was trying to suppress the voice of opposition.

Sanjay was arrested in Jangaon district on Tuesday when he was preparing to sit on the protest against the arrest of BJP workers for staging protest outside Kavitha’s residence in Hyderabad the previous day.

He was later shifted to Karimnagar and kept under house arrest. The police later issued a notice to the BJP leaders asking them to immediately stop Praja Sangrama Yatra saying there is no permission for the same.

Police stated in the notice that provocative statements are being made due the padyatra which created apprehension of breach of peace in Jangaon district.

The BJP leaders denied the allegations and sought intervention of Governor Tamilisai Soundararajan so that the yatra continues.