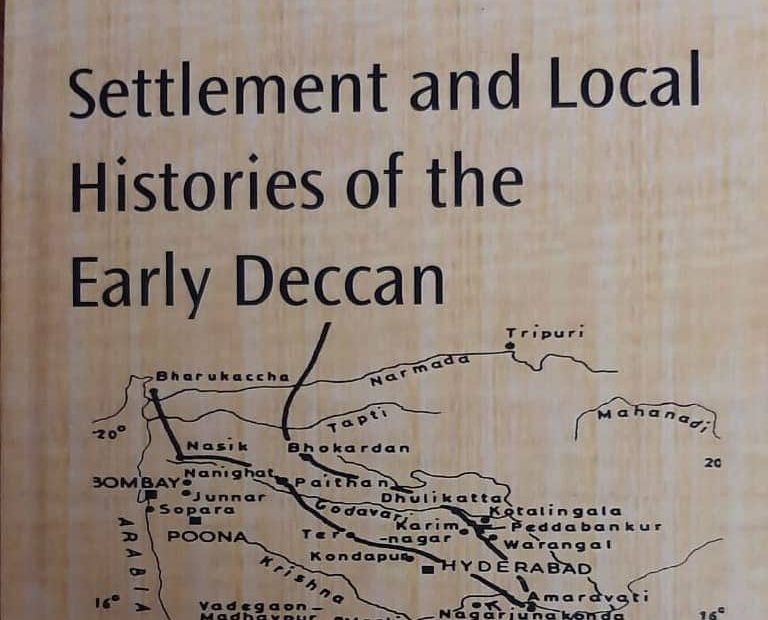 A book titled “Settlement and Local Histories of the Early Deccan” by Aloka Parasher-Sen, Emeritus Professor at the Department of Sanskrit Studies, University of Hyderabad has been published by Manohar Publishers as a South Asia edition.

The major thrust of the book is to unravel the multi-faceted history of the Deccan to reflect on the earliest historical foundations of her personality and to provide the basis of understanding her social, economic, political and ideological evolution over historical time.

The present work is an attempt to look at regional history from the perspective of given localities that give multiple readings of the many facets of early Deccani society and culture. Hitherto, the historical studies articulated the history of the region in terms of the broad categories of language and religion based on the present-day linguistic division of states.

By emphasizing on multiple sources of information, largely on extant archaeological material,inscriptions, textual material and oral memory found in local contexts, an attempt was made to move away from the conventional histories by focussing on local spatial contexts as the primary layer of historical reality.

The essays in this work are presented in three different parts. Part I ‘Establishing the Terrain’ has three chapters. While Chapter -1 emphasizes on definitions of the region, locality and urban centre, Chapters 2 and 3 looks at the processes of the State formation and urbanization in the Deccan respectively.

While explaining the significance of the history of small localities, the author emphasizes that all regions and localities emerge with their distinct identity not in isolation but in constant interaction with contiguous areas.

This idea is further elaborated in Chapters 2 and 3 in which the author focuses on differences of the processes of
historical changes that occurred in the hinterland sub-region of Telangana with focus on mid-
Godavari valley which was contrasted with the Andhra coastal areas with a focus on the
lower Krishna valley.

Relying largely on the archaeological data, the author takes a close look at the way urban centres and other settlements emerged in these sub-regions. Against the background set in Part -1, in Part-II entitled ‘Standing on the Particular’ the author highlights the differences in the way settlements have evolved historically over the
Deccan Plateau region.

Chapters-4 and 6 in this section highlights on economic and trade activity at Kondapur and Patancheru with significant religious affiliation. The author also raises the concern of how local history is rapidly disappearing due to fast-moving economic activity in these two localities. Patancheru in particular had shown successive waves of
occupants with their own ethos and historical identity.

This region though lacked political and economic history faced destruction and displacements, yet provide a mosaic of intertwining histories of different religious communities that made Patancheru the home for many people. Chapter-5 on the other hand, takes a close look at two popular Buddhist sites namely, Thotlakonda, located in Visakhapatanam district of Andhra Pradesh and Phanigiri located in Telangana.

Significant feature of these two settlements is that they both have served as habitations for monks. Interestingly, the author also discusses at length the water management system practised at these two sites by the Buddhist monks. Both these settlements which are located near the hinterlands of agricultural land show the linkages of
the Buddhist monks with the emerging urban economies of the times.

The Buddhist architecture and rich sculptural art at these places is also a clear testimony to the show the
building of relationships between the local people and the Buddhist community which relied on local resources under local conditions.

Part III entitled ‘Accessing the Other’ addresses issues around the interface of religious and social history. Two chapters in this section focuses on Buddhism and Jainism and its interaction in the local context by taking up the history of Nagarjunakonda and Shravana Belgola.

The last Chapter in this section focuses on an interesting study of Nanakramguda located 4 kms from Tolichowki, in Hyderabad. It focuses on the social and economic status of the various communities in this village and how they accesses the religion which remains unaffected despite the vigorous developmental activities that changed the entire landscape over the past few years.

Parasher’s study brings out very effectively how the local people try to remember their history particularly in the changing environmental conditions. In all the chapters, the author brings out the historical sensibilities of people in various locations from the Kotalingala and Dhulikatta to Phanigiri, Patancheru, Kondapur and Nanakramguda and from Thotlakonda to Nagarjunakonda, Amaravati, Vaddamanu and Shravan Belgola which have been recounted and illustrated for the readers.

The scholarly essays in this work, as the author argues, provides us new methods of doing historical research that was hitherto relied heavily on the written records. Through the cognitive space of orality and memory, the social and cultural landscape of the locality was retrieved along with its flexible notions of time and space.

This type of work becomes a very good source book for all future researchers to undertake research essentially to understand the history of small localities which than can be subsumed to the larger regional histories. This study provided a holistic and total local history written in the interests of the local people. Therefore, every fragment of information finds place in such documentation of local histories.