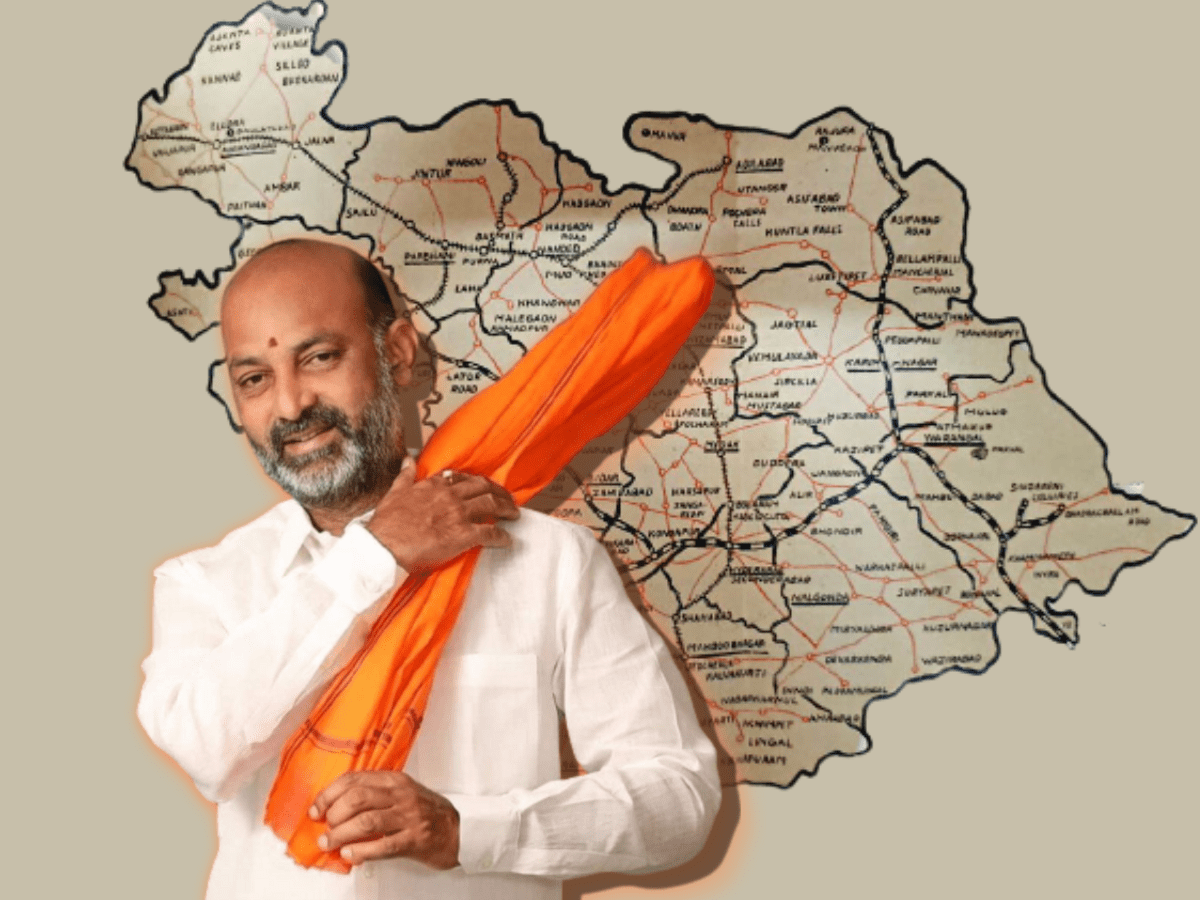 Hyderabad: In a clear push to politically capitalise on historical events, the Bharatiya Janata Party (BJP)-run central government will organise a year-long ‘celebration’ marking ‘Hyderabad Liberation Day’ starting from September 17. Union Home Minister Amit Shah has also been invited for the same. On that date in 1948, the erstwhile state of Hyderabad run by the Nizams was annexed to India.

In a letter addressed to the chief ministers of Telangana (K. Chandrashekhar Rao), Maharashtra and Karnataka, union culture minister G. Kishan Reddy invited them as guests of honour for the inaugural event of the ‘Hyderabad Liberation Day’ event in Telangana. The entire state, along with five districts of Maharastra and Karnataka, were part of the Nizam’s Hyderabad princely state.

The irony however is that the BJP did not exist when the state of Hyderabad was annexed with the military offensive called Operation Polo. In fact Telangana was mostly in control of the Communist Party of India (CPI). The Indian army was sent by the Centre on September 13 after negotiations with the last Nizam Mir Osman Ali Khan fell through after independence. The state was formally annexed to India on September 17.

More importantly, the annexation is also a painful memory for many Muslims in the Hyderabad state, given that there was a massacre of thousands from the community after the Indian army took over the state. The atrocities against Muslim are well documented in the Sunderlal Committee (set up by India’s first PM Jawaharlal Nehru) to look into the atrocities against Muslims) report.

The BJP union minister in his letter also noted that parts of Maharashtra and Karnataka which were under the Nizam’s territory already observe ‘Marathwada Liberation Day’ and ‘Hyderabad-Karnataka Liberation Day’ every year. Every year the Bharatiya Janata Party’s state unit has also been demanding the current Telangana Rashtra Samithi (TRS) government to observe ‘Liberation Day’ on September 17.

The term Liberation Day is a malicious term aimed at painting the (Hyderabad). Nizam’s rule as continuation of ‘occupation’ of formerly Princely State of Hyderabad. The date marks the day when the erstwhile state of Hyderabad, which comprised Telangana and parts of Maharashtra and Karnataka, was annexed to India through the military action called Operation Polo or Police Action.

However, the irony of BJP’s demand is that it was literally a non-player in 1948 and in state politics then. Its ideological parent, the Rashtriya Swayamsevak Sangh (RSS), had been active, but its role was very limited given the fact that in Telangana it was the Communist Party of India (CPI) which had taken over most of the rural areas. The CPI in fact organised the ‘Telangana Armed Rebellion’ against state-appointed Jagirdars, the landholding class that comprised both Hindus and Muslims.

When the Indian army came marching in to take over Hyderabad

It was essentially an uprising against feudal landlords by peasants in Telangana. “The flip side of it is that the Telangana Armed Rebellion, which continued till 1951, is another reason the army had stayed back in Telangana, as the then Indian government headed by former PM Jawaharlal Nehru, were wary of the communists, who refused to lay down their arms

That resulted in the army going after the communists, due to which over 4000 CPI cadres were sent to jail until 1951. However, the matter was resolved after the CPI decided to call-off the struggle on October 21, 1951 (Telangana People’s Struggle and its lesson: P. Sundarayya) and contested the first general elections.

But there is a lot more to Police Action, given that at least 27000 to 40,000 Muslims died due to targeted communal killings in the Hyderabad state. So what started it all? Essentially, the problem started after Mir Osman Ali Khan, the last Nizam of the Hyderabad state, wanted to stay independent and not join the Indian union. Here is the entire event in sequence..

Emergence of Qasim Razvi and the Razakars

After independence, Osman Ali Khan’s government and the Indian union began negotiating, with the latter being adamant about letting the Hyderabad state, which was surrounded by India, staying independent. The last Nizam on the other hand did his best to do exactly that. It led to both sides signing the ‘Standstill Agreement’ on November 1, 1947, for a year, to negotiate the issue at hand.

However, a separate parallel political power emerged in the Hyderabad state, in the form of Syed Qasim Razvi, a lawyer from Latur (Marathwada region in Maharashtra), who took over the reigns of the Majlis-e-Ittehadul Muslimeen (started in 1927) in 1946, after the death of Bahadur Yar Jung in 1944. Jung was one the MIM’s most powerful leaders and was a respected figure. It is hard to say what would have happened had he not died under suspicious circumstances (suspected poisoning).

Even in the book October Coup, author Mohammed Hyder, the last collector of Osmania district in the erstwhile state, writes that Razvi in private meetings argued that Muslims are meant to be rulers (which many disagreed with). Even the Nizam himself never uttered such words, and always maintained that both Muslims and Hindus were like his two eyes. However, historical blunders are always there for us to look back in retrospect.

Razakar violence against Hindus (and anyone opposed to Hyderabad’s independence), and Communist-backed uprisings by peasants against landlords in Telangana’s rural areas meant that the political situation in 1948 was in turmoil. In fact, the murder of Shoaibullah Khan, the editor of Imroze, an Urdu daily, best captures the situation then. Khan was murdered by Razakars during the intervening night of 22-23 August in 1948.

“They had cut his wrist off as an example for others, and had warned that they would do that to anyone who writes against the Nizam,” Burgula Narsing Rao (89), who witnessed the incident, told me during an interview. Khan’s Imroze used to function out of Rao’s home at Kachiguda. Rao is also the nephew of former Congress leader and first chief minister of the Hyderabad State, Burgula Ramakrishna Rao.

Many CPI leaders from Andhra, like P. Sundarayya and D. Venkateshwar Rao, also led the movement, which continued after Police Action. The older generation of the CPI believes that Police Action in Hyderabad state was initiated more to target communists then, than actually the Nizam. “We were the ones fighting the Razakars, and later the Indian army had come. Patel and Nehru were more worried about the Communists,” said M K, Moinuddin (93), a former Jagirdar and CPI legend who went underground in 1948.

While the Hyderabad administration, under its last Prime Minister Laik Ali, gave the Nizam the impression that things were going well, that was not the case. Finally, the Indian army came marching, with Police Action starting on 13 September 1948, and officially ending on 17 September 1948. Syed Ahmed El-Edroos, the last commander of the Hyderabad State Army, in his book Hyderabad Of The Seven Loaves, narrates the entire event.

El-Edroos who had the foresight to avoid bloodshed and save his troops, had surrendered. Lt. Col. J. N. Chaudhuri, who led Police Action, took over as military governor for 18 months, after which a provincial government under M. K. Vellodi existed till the first general elections. It may be noted that the last Nizam was made the Rajpramukh in 1950, while Razvi had been arrested and sent to jail for nearly a decade, after which he was allowed to leave for Pakistan.

While the annexation of Hyderabad itself is not an issue perhaps, the unfortunate fallout of it was the targeted killings of Muslims in the districts of Maharashtra and Karnataka. According to the Sunderlal Committee report (Pundit Sunderlal was appointed by former PM Jawaharlal Nehru to look into atrocities), 27000-40,000 Muslims had been killed in communal violence in districts like Gulbarga, Osmanabad, Bidar, etc.

This is the harsh reality of Police Action, which scarred generations of Muslims in Hyderabad city and other districts of the Hyderabad state. Mass displacement, led by discrimination followed. The best example is cited in the book October Coup, which details how the author, a civil servant, had to fight for his innocence.