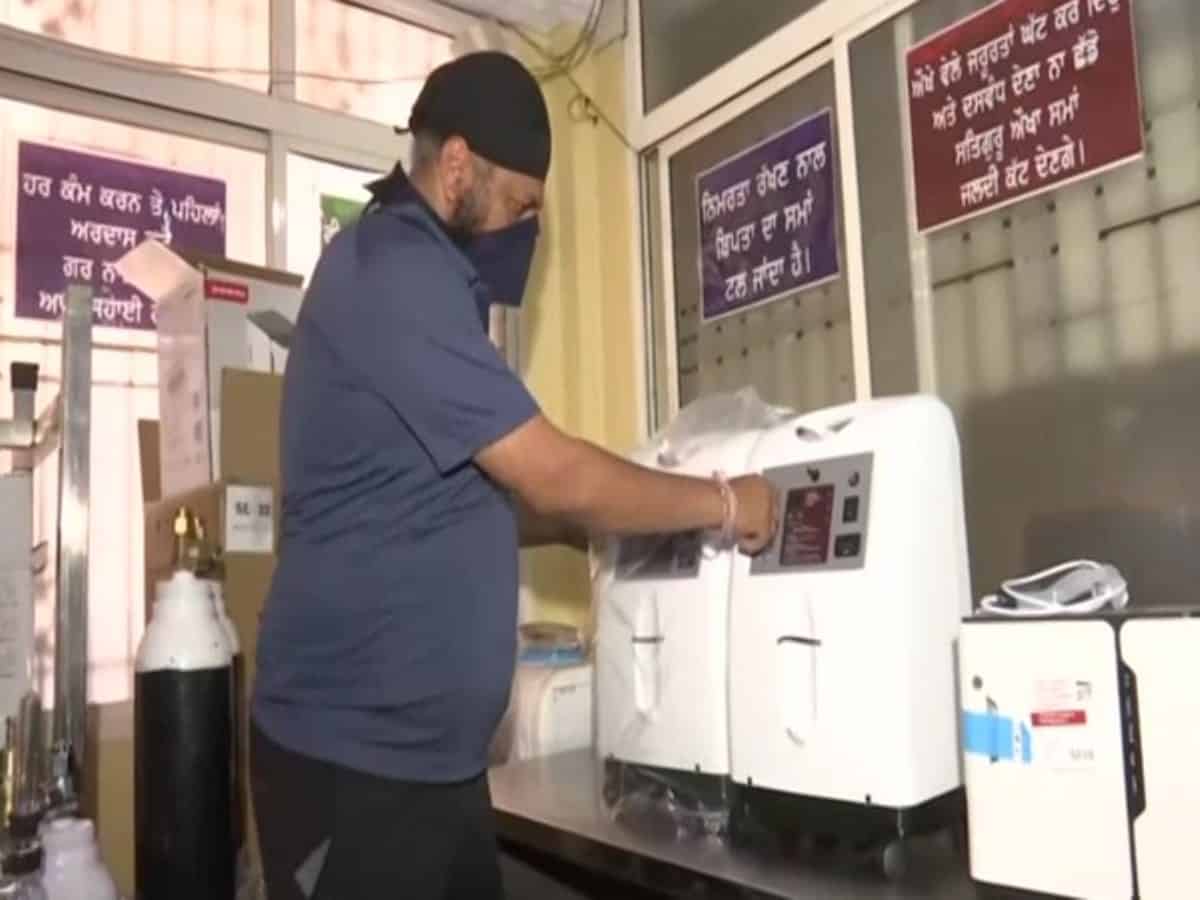 Hyderabad: In the midst of a ravaging COVID-19 wave and overburdened public health infrastructure, a Sikh Seva organisation in Telangana’s Hyderabad opened up an oxygen bank to help people who are in need of the life-saving gas.

The oxygen bank has been set up under the title ‘Mission Breathe Life’ the Sikh Seva organisation which works under Gurudwara Shri Guru Singh Sabha.

Speaking to ANI, Joginder Singh Gujral, the General Secretary of the Gurudwara said: “In order to help those who are suffering from lack of oxygen because of COVID-19, we have started serving people with the much-needed oxygen and also with required medications. We have, under the service, opened up an oxygen bank that contains various sizes of oxygen cylinders.”

Apart from oxygen cylinders, “we are also providing oxygen concentrators to those needy patients,” he said adding that the service provided here is completely free of cost and is a service to the humanity.

“For the people who are in need of oxygen, we have developed a website ‘sikhshyderabad.com’, where people can place their requests for oxygen. Our volunteers will call them and check with them for its requirement. Then, they will be called here at Gurudwara and the required oxygen cylinder or concentrators will be given to them,” he added.

Joginder Singh further said that all the the service that is being provided is being financially managed by the donations received and added that the Sikh Sangat has come forward with only aim of serving the humanity.

He informed that about 75 per cent to 80 per cent of the requests that have been received by the team have been fulfilled which also included requests from various hospitals. He mentioned that the oxygen bank will become a permanent service.

“We are also providing free food to the poor at various hospitals and to truck drivers on highways as many hotels have been closed due to the lockdown in the state,” Singh said.

Surender Singh, the President of Gurudwara Shri Guru Singh Sabha, told ANI that initially, around five weeks back, when the number of cases were on the surge, they decided to set up this Seva Society.

“Initially it was very hard to procure oxygen cyclinder and concentrators as they were on severe shortage and we have procured them from wherever possible, also from other states,” Surinder said.

He said that the website has been developed so that it would be easy for people to place their requests. He “On a daily basis, we receive about 30 to 35 queries requesting for oxygen and we are able to help them with what they need,” Surinder added.

He further mentioned that they are trying to reach out their services even at the district and rural areas of the state. He added that they are also looking forward to open up an isolation centre and are looking for a volunteering medical team.

Surender Singh falso appealed to the Telangana government to see if a vaccine camp can be established at Gurudwara at least for the frontline workers.

“I request the state government to set up a 3 to 4 days vaccination camp here at the dispensary in Gurudwara so that people in and around can get vaccinated.” He further appealed the people to help them with 3 to 4 ambulances for commuting the patients to and from the hospitals.