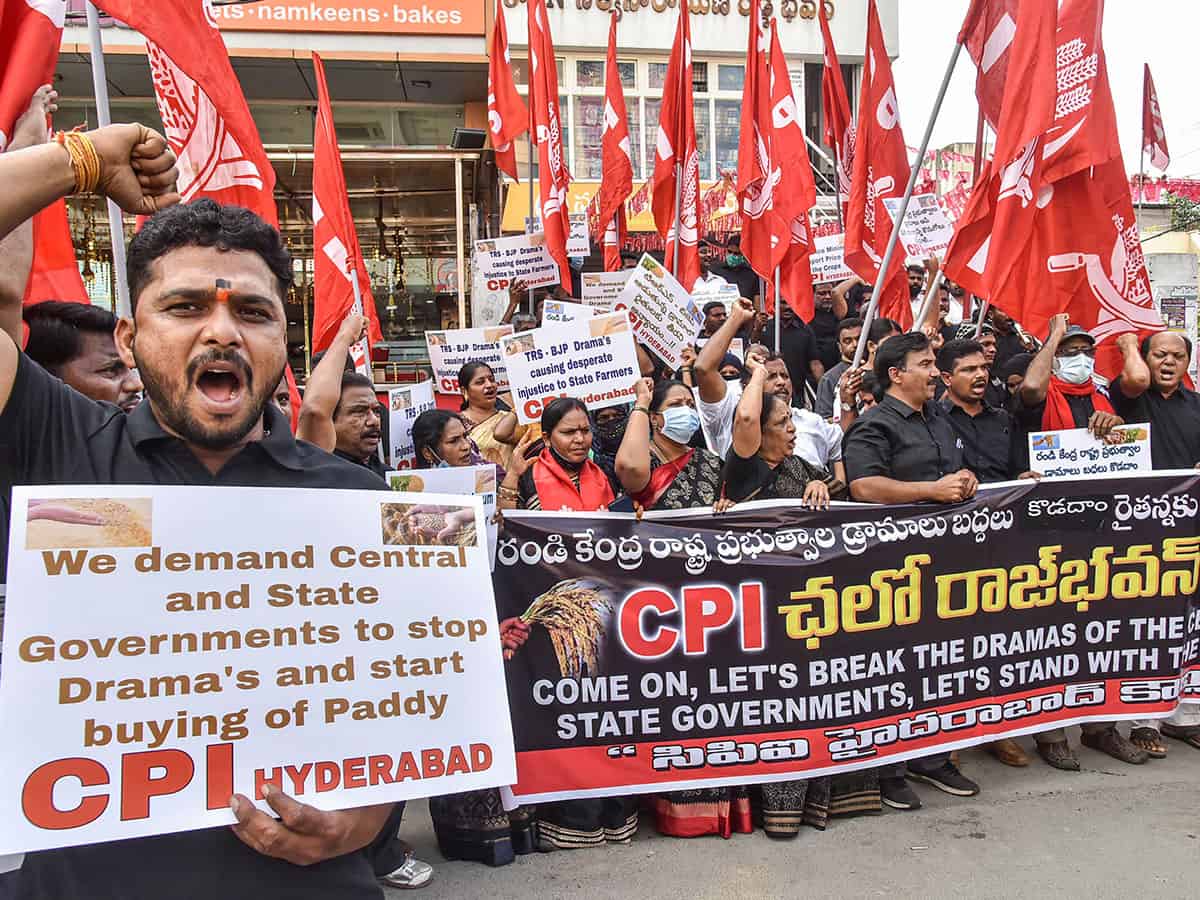 Hyderabad: Leaders from the Communist Party of India (CPI) held a protest rally under the banner of Chalo Raj Bhavan starting from the All India Trade Union Congress in the city on Tuesday. The protestors demanded the government to buy paddy grown by the farmers of Telangana state.

The protestors carried placards targetting both the Telangana as well as the Central government over the paddy procurement issue. “We demand Central and state governments to stop dramas and start buying paddy,” read a poster at the rally in Hyderabad.

The protest comes amidst Telangana chief minister K Chandrashekar Rao’s critique of the Union government. Speaking to the media over a week ago, KCR said that despite repeated attempts and visits to Delhi, the Centre turned a blind eye to the plight of Telangana farmers. Hence the state agriculture minister was compelled to announce that they would be unable to procure paddy this Rabi season.

What followed was a war of words between KCR led Telangana Rashtra Samithi and the leaders of Bharatiya Janata Party including state president Bandi Sanjay. KCR himself led a dharna (demonstration) against the Union’s “anti-farmer activities.” At one point, KCR also brought up the Lakhimpur Kheri violence where farmers were allegedly run over by a BJP leader’s son. He remarked that the Center was jealous because Telangana was the number one state in rice production.

A few days ago, the state cadre of the Bharatiya Janata Party also planned state-wide protests in view of the fact that the Telangana government wasn’t “helping farmers” and were “accusing Centre for no good reason.”

Meanwhile, CPI has carried out various protests across different parts of Telangana including Siddipet, Abdullapurmet, and Hanumakonda to shed light on the paddy crisis. Two weeks ago, CPI also held a protest against the failure of the TRS government in Telangana to decrease the fuel prices in spite of the Central Government doing so.