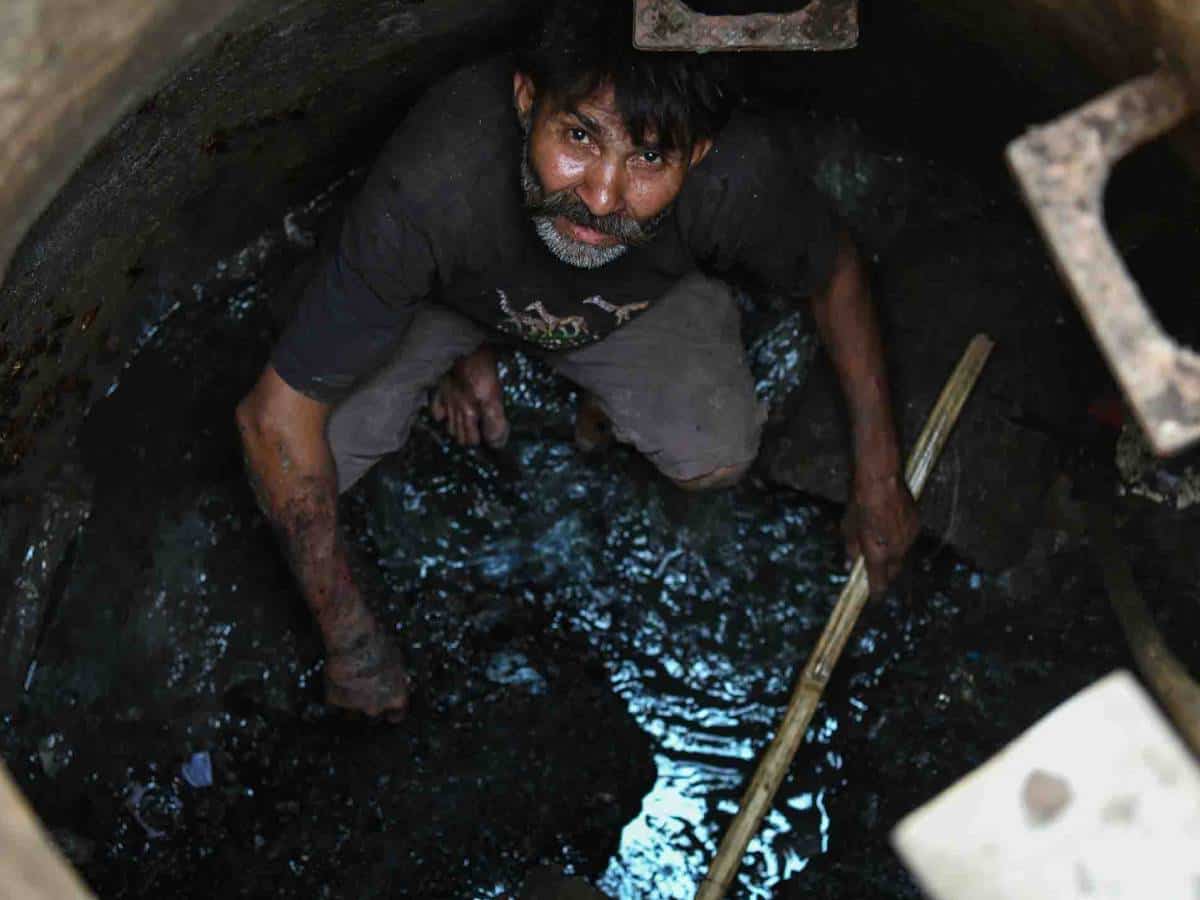 Hyderabad: The search is on for 45-year-old Ananthaiah, the Dalit manual scavenger who entered the manhole and is feared dead, even two days after the incident occurred at Sahebnagar in LB Nagar.

Along with Ananthaiah, was another Dalit man—25-year-old Shiva got into the manhole first to clean a flood pipeline at around 10 pm and went missing. Ananthaiah had to jump in for Shiva’s rescue. This happened on Tuesday night and Shiva’s dead body was retrieved by the next morning.

Engaging or employing a manual scavenger is a punishable offense under the Prohibition of Employment as Manual Scavengers and Rehabilitation Act, 2013. Besides, the GHMC rules too don’t allow repairs to be taken up in manholes past 6 pm.

Gowri is also an 8-months pregnant. Meanwhile, Ananthaiah is survived by his wife Bhayamma.

Following this, the contractor Yellaiah was booked under sections of under the Prohibition of Employment as Manual Scavengers and their Rehabilitation Act, 2013 and 304 A (causing death by negligence) of the Indian Penal Code.

These murky deaths, however, throw light on the failed attempts to mechanize the scavenging process and how the Dalits continue to be employed for manually cleaning the sewerages.

In order to clear chokages in sewer lines, mini jetting machines are deployed by the Greater Hyderabad Municipal Corporation (GHMC), which pump high-pressure air into the pipeline. Of the 70 for the whole city, four are known to be deployed in the LB Nagar zone.

But the contractor chose to employ the deceased persons anyway. “We will know the reason only after summoning him,” GHMC deputy commissioner Maruthi Diwakar was quoted as saying to The News Minute.

In this specific case, another senior GHMC official told that the issue at Sahebnagar was not chokage, but silt that is deposited inside the pipeline.

Then, the machines require fixing of rope inside the manhole with a bucket tied on the other end. The rope along with the bucket travels to the next manhole where it is pulled up, the official was quoted as saying by The Hindu. But it is still a lengthy process, which is why the Dalit manual scavengers were engaged.

Apart from that, the deaths are also a direct result of the failure in implementing the 2013 Act.

Effective implementation of the 2013 Act will require accountability at every stage of the process: in identifying people working as manual scavengers, facilitating access to their rehabilitation, and imposing penalties on officials who fail to take the prescribed measures to end manual scavenging.

“These failures manifest themselves first in denial. They [governments and municipalities] refuse to acknowledge disease and death, hence elementary compensation, guaranteed by the earlier Bills, is rarely ever provided to the victim’s family,” said an piece published on The Wire.

As proof of the denial, no compensation has been promised by GHMC and the state government on their deaths. But, the contractor Yellaiah announced 5 lakh compensation to each of the bereaved families.

Meanwhile, the union government told Parliament on Wednesday that 941 people died while cleaning sewers and septic tanks in the last two decades.