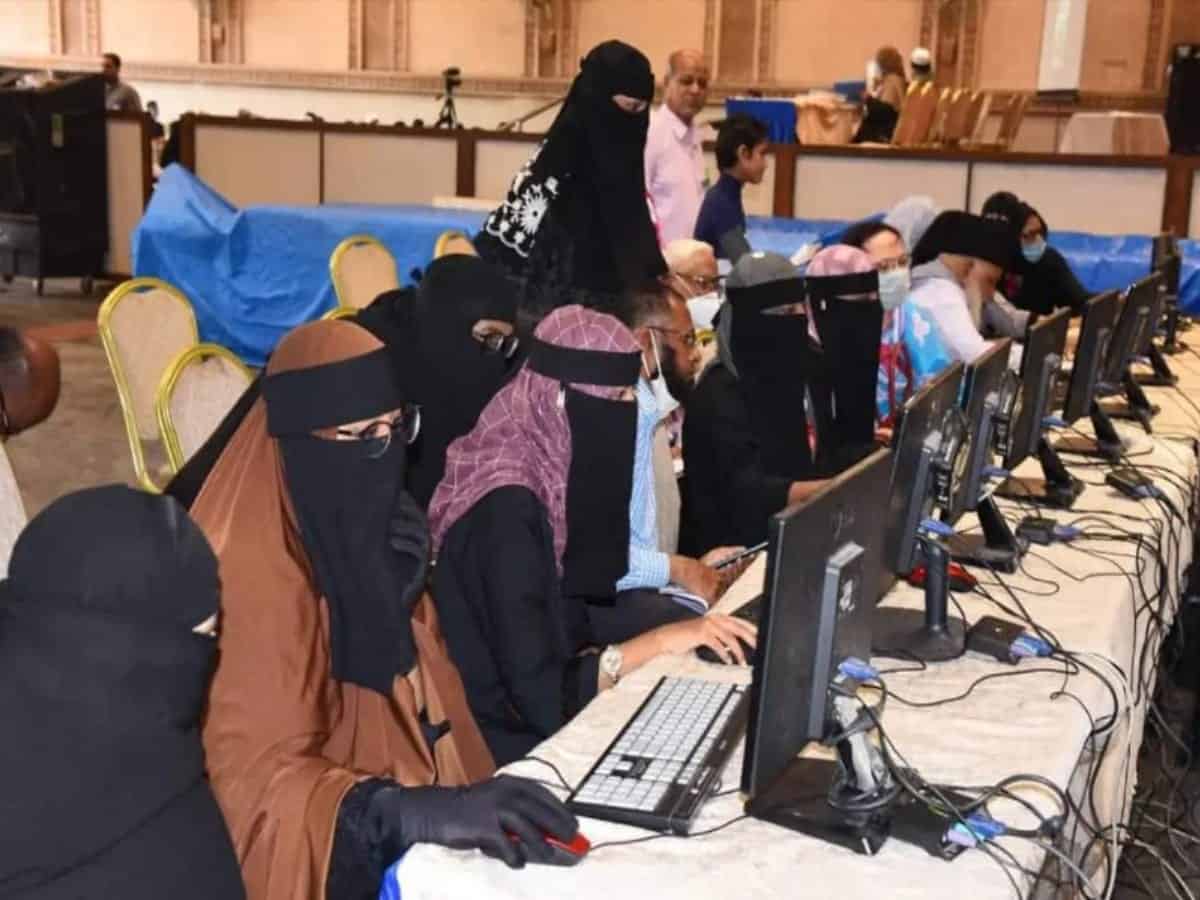 Hyderabad:  Siasat Urdu Daily in collaboration with Millat Fund organized the ‘Du-Ba-Du’ program yesterday at Kashish Garden, DRDL Road Chandrayangutta on January 31, 2021. It was attended by hundreds of parents seeking matrimonial alliances for their sons and daughters.  These parents met face to face with the parents of prospective bride or brooms and exchanged bio-data and pictures with them.

Covid-19 guidelines were fully complied with during the program.

The program started with the recitation of the Holy Quran.  Islamic scholar Syed Alyas Pasha delivered the inaugural speech.  In his speech, he spoke at length about the un-Islamic rituals that crept into Muslim society and urged Muslims to shun the un-Islamic practices in marriage.  “It is the duty of Muslims to ensure simplicity and ease in conducting the marriages.  The parents of the boys or girls must not have unreasonable desires and perform their marriages as per the Islamic Sharia.”

Another scholar Dr. Shaikh Saadat Ali exhorted Muslim parents to take advantage of this program to marry off their children as per the Sunnat. He said, “Muslim youths must eschew pomp and show in marriages and stick to Islamic character of simplicity at the time of their marriages”.  He further urged them to make marriages easy which is the inherent feature of the Islamic Sharia.

“It is the duty of every Muslim to purge Un-Islamic rituals and practices from the marriages and keep the marriage ceremonies as simple as possible to remove hurdles from the alliances of poor girls and boys.  Parents must look for good character in the prospective bride or groom while selecting spouses for their children.”

Dr. Mohammed Nazim Ali spoke about the sanctity of the marital alliance in Islam and said, “seeking dowry is an evil un-Islamic practice crept in Muslim society.  It is ‘haraam’ and those giving and taking would be sinners.  It is imperative for Muslims to shun the evil practice of dowry.”

Dr. Ali praised the unique initiative taken by Siasat Urdu Daily, and its Editor Zahid Ali Khan, and his companions for launching the “Du ba Du” program which is greatly helping Muslims in Deccan.

Due to the lock-down “Du Ba Du” program had to be canceled which caused dismay among the people.  Its resumption raised their spirits and hopes in finding suitable matches for their sons and daughters.

This edition of the “Du ba Du” program was conducted under the guidance of Zaheeruddin Ali Khan, the Managing editor of Siasat Urdu Daily.

A large number of parents attended this program with bio-data and pictures of their boys and girls.

About 105 editions of the “Du ba Du” program were held earlier in Telangana, Andhra, and Karnataka where lakhs of parents found suitable alliances for their boys and girls.

The program continued till 5 pm.  About 97 boys and 141 girls’ bio-data were registered.

Coordinator of “Du ba Du” program Syed Khalid Mohiuddin Asad and his team worked tirelessly to ensure the success of this program. Some of the notables who attended this program include social activist Sara Mathews, Padmashri Dr. Wahid Ahmed., Dr. Makhdoom, and others to observe the program.  The program was conducted by Saleh Bin Abdullah.