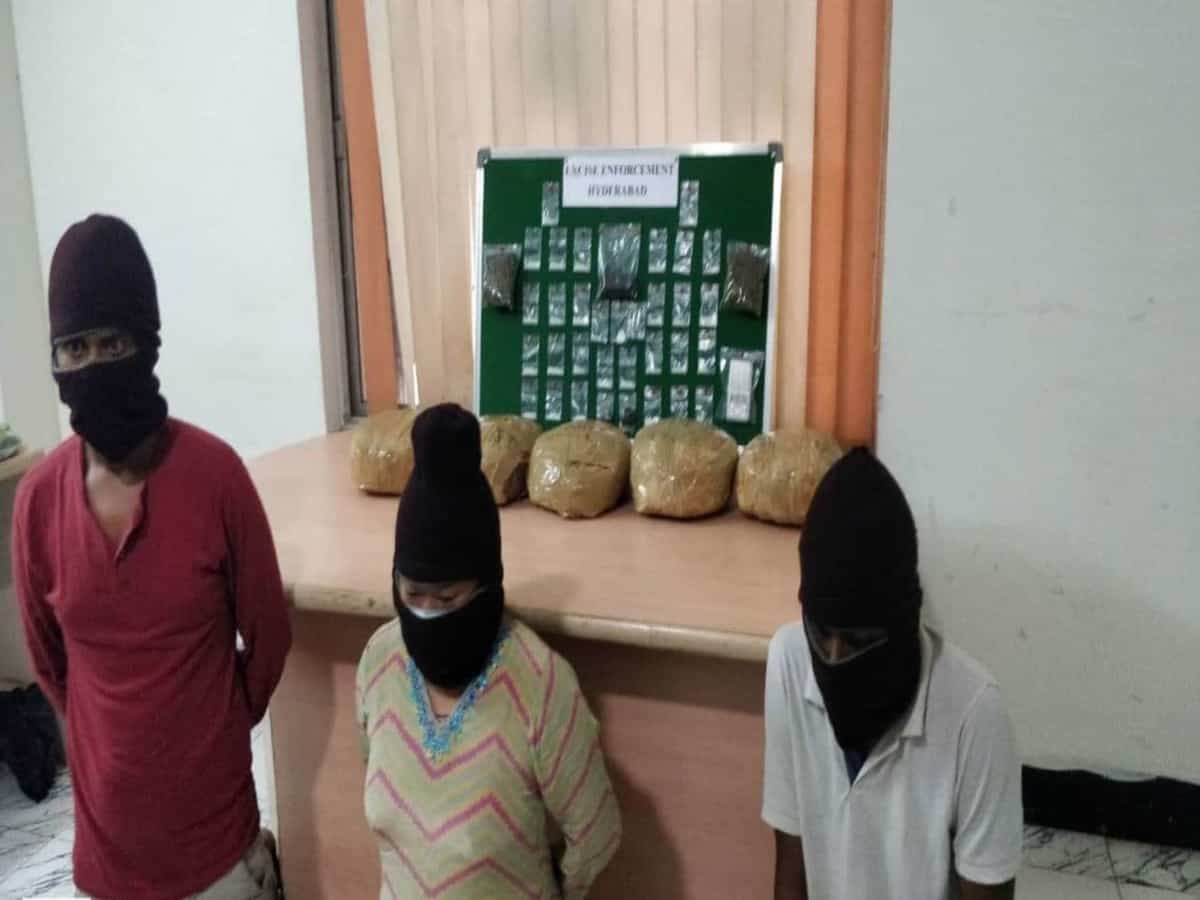 Hyderabad: The excise enforcement team on Saturday busted a drugs racket and apprehended three persons including a woman hailing from West Bengal.

According to the sources, a team of excise enforcement conducted route watch at Road No. 14, Banjara Hills, Hyderabad and intercepted a motor Bike and seized (30) Grams of MDMA, 10 kgs of Dry Ganja, LSD Blots, and 50 gms of Charas from the possession of Mardi Shiva Shanker Reddy resident of Prashnat Nagar, Kondapur, Gandham Manikanth of Jayaprakash Nagar, Balakampet and Shilpa Rai a native of Darjeeling of West Bengal who is residing at Fathima Colony.

The drugs supplier Manukonda Sathyanarayana aka Sathi a native of Visakhapatnam is absconding and is operating the Drug peddling activity from GOA and with the help of three accused persons Shivashankar Reddy, Manikanta and Shilpa Rai by paying certain commissions to them.

The modus-operandi of the racket is that, Shilpa Rai used to bring Ganja & Charas as per the instructions of Satyanarayana from Araku/Vizag by concealing the Ganja/Charas in her luggage bag through private Buses and used to contact Shivashankarreddy Reddy or Manikanta, once she reaches Hyderabad.

They will keep the material in the OYO Rooms or in the rooms hired by Sathyanarayana at Knodapur area for that day. On the same day Evening they will arrange a ticket to Shilpa Rai in Private Bus to Goa. She used to bring MDMA, LSD Blots from Satyanarayana aka Sathi and will handover to Shivashankatreddy.

Manikanta and Shivashankar Reddy used to contact the needy customers at Hyderabad sale it for 5000 rupees per gram of MDMA, 2,000 rupees per LSD Blot.