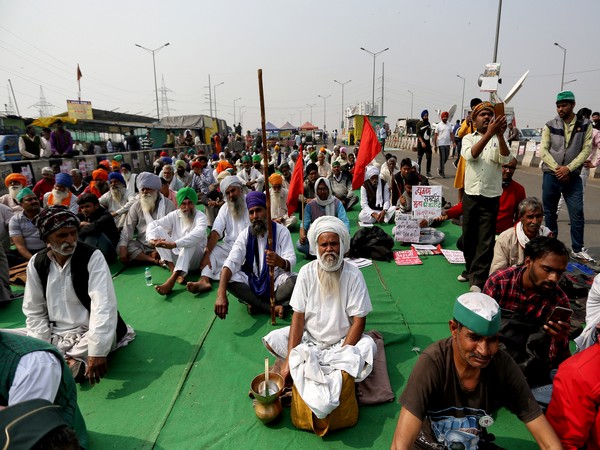 Hyderabad: The farmers’ union All India Kisan Sangharsh Coordination Committee (AIKSCC) and trade unions staged a protest at Dharna Chowk in Hyderabad on Saturday to mark the completion of seven months of the protest against the three new farm laws, amid chants of ‘Save Agriculture, Save Democracy’ slogan.

Speaking to ANI, Kiran Vissa, National Working Group Member of AIKSCC said, “This protest is in the support of the farmers protests that is underway since the last seven months. All we want is that the Union Government must wake up and perform its duties properly. The central government is sleeping as far the agricultural issues are concerned and are not doing anything to solve those issue.”

He said that 4,00,000 farmers have committed suicide in the last two decades.

He further added that even during the COVID-19 pademic, the Central government has been sleeping, leading to the death of lakhs of people in the country.

Speaking about the three farm laws he said that these laws were introduced last year by the Central Government to bring corporate domination into agriculture.

“We demand that these laws must be called back and further MSP to all the crops must be promised to the farmers,” said Vissa.

As a part of the protest, a ‘Chalo Raj Bhavan’ march was to be held to submit a memorandum to the Governor but the protestors were detained by the police and were taken to the Gandhinagar Police station here in Hyderabad.

To mark the completion of seven months of the ongoing farmers’ agitation, the farmers had announced that they will observe ‘Save Farming, Save Democracy Day’ across the country today and submit a memorandum to Governors in all states.

Meanwhile, earlier today several thousands of farmers pushed the barricades aside in Haryana’s Panchkula as they marched towards Governor’s residence in Chandigarh to submit a memorandum seeking repeal of the farm laws.

Farmers have been protesting at the different borders of the national capital since November 26 against the three newly enacted farm laws – Farmers’ Produce Trade and Commerce (Promotion and Facilitation) Act, 2020; the Farmers Empowerment and Protection) Agreement on Price Assurance and farm Services Act 2020 and the Essential Commodities (Amendment) Act, 2020.