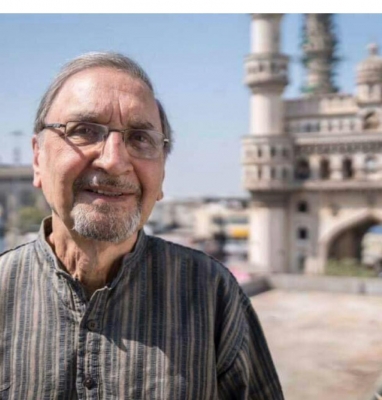 Luther, who was also a poet, was ailing for some time. He is survived by wife, a son and a daughter.

One of the first officers of the Indian Administrative Service (IAS), he was considered to be an authority on Hyderabad’s history and culture and a symbol of the city’s “Ganga Jamuni tehzeeb”.

He was also engaged in conservation activities playing a key role in the Society to Save Rocks.

The last rites were performed at Vaikunta Mahaprasthanam, Whisper Valley, in the evening.

Luther authored 14 books, the last being his autobiography “A Bonsai Tree”, published in 2017. It is a gripping story encompassing heartrending events of the Partition, the life of a migrant on the Indian side of Punjab, his struggle to fulfill his dream, his experiences as an administrator and his love for Urdu, Hyderabad and humour.

Born in Hoshiarpur in 1932, Luther did his primary schooling in Dharam Pura, a suburb of Lahore, with Urdu as the medium of instruction.

The family escaped along with many others and migrated by train from Rawalpindi to Amritsar in 1947.

Luther later became one of the first IAS officers. He began his stint in Kurnool in 1956 and transferred to Hyderabad in 1958. He wrote in his autobiography that when he arrived in Hyderabad, he wondered whether it was compensation for the loss of Lahore. “It was a popular saying in Punjab that one who had not seen Lahore had not yet been born! Coming to Hyderabad, I felt twice born,” he wrote.

Luther fell in love with the city for its cosmopolitan culture, Urdu language and poetry, rich history and heritage and became part of the social circle even while discharging official duties in key positions. As a special officer at the Municipal Corporation, he used to act on petitions received in Urdu.

Luther served in various positions including Chief Secretary in undivided Andhra Pradesh before retirement in 1991.

Telangana Chief Minister K. Chandrasekhar Rao has condoled the death of Luther, recalling his services as a person who worked on the history and culture of erstwhile Hyderabad State and its rulers and also as the President of the Society to Save Rocks, Hyderabad.

The Chief Minister also recalled his services as a bureaucrat working in various capacities in the united Andhra Pradesh Government. Rao conveyed his condolences to the members of the bereaved family.