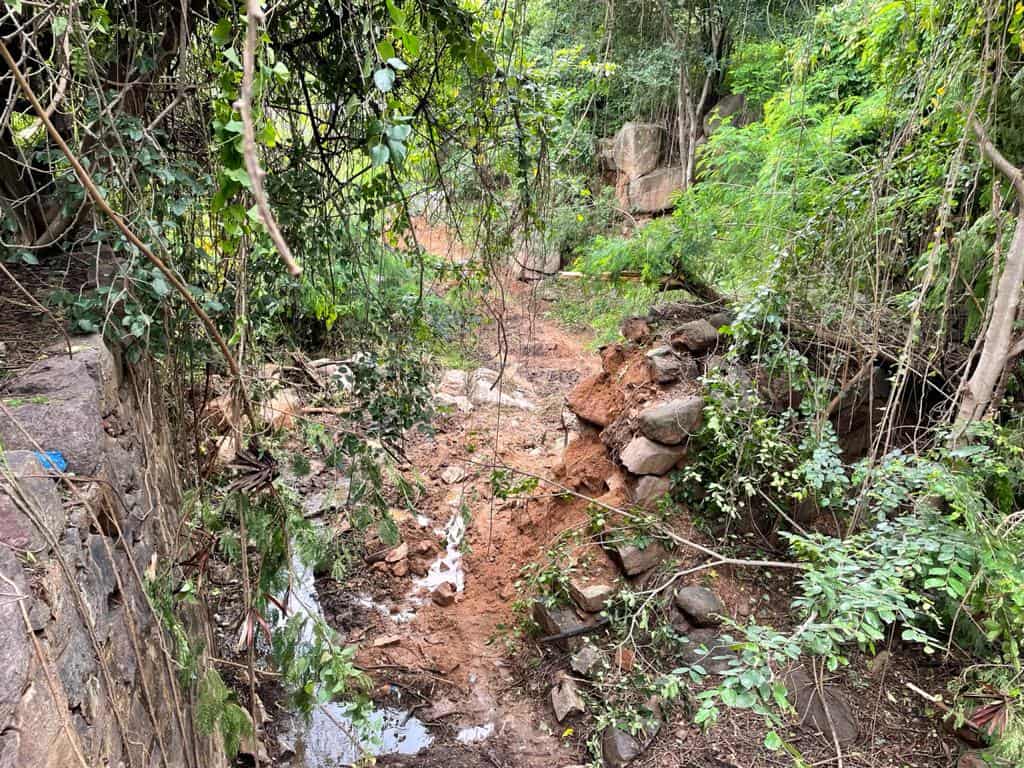 Hyderabad: A part of the historic Golconda fort’s moat has ben damaged after the Greater Hyderabad Municipal Corporation (GHMC) deployed earth movers to clear silt and debris from a water channel of the ancient fortress. The transgression took place on the northern side of the fort, where GHMC officials are working to drain water from the Shah Hatim talab (lake) into the Naya Qila area.

As it stands, the Golconda fort is a protected monument, and falls under the ambit of the Archaeological Survey of India (ASI), which is its custodian. As per ASI rules, no construction activity is permitted in the 100-metre radius from the fort. All the old walls of the Golconda area also are ASI properties, and are of historical value. Changing or damaging any of the old structures, will cause further to the monument, which is riddled with encroachments.

Over the last 3-4 days, work has been going on in full swing near the moat. The work is being taken up mostly to avoid the nearby areas of Nadeem Colony, Vali Colony, Raghava Colony, etc. from getting flooded. Last year’s torrential rains led to floods in the area. However, water also enters the colony as many people have built homes in the full tank level of the historic Shah Hatim lake.

A day earlier on Monday, ASI officials in-charge of the Golconda fort’s protection also visited the moat area where the work is ongoing. On contacted an ASI official, he told Siasat.com, “They said that permission was taken for the work, and we allowed them to do the desilting work but only manually. However, as the moat was deep and there was a lot of debris collected, they used earth movers.”

The ASI official added that because the earth movers were brought in to complete the work, a part of the stone wall surrounding the moat was damaged. However, it may be noted that the GHMC and even locals in and around the fort, undertake work in the restricted areas without any permission. Many unauthorised constructions or works have been flagged time and again.

History of the Golconda fort

The fort has 87 bastions, and eight gates, of which a few are not accessible to the general public as they are under army control. It is believed to be one of the Deccan’s most impregnable forts, and had kept Mughal emperor Aurangzeb’s army at bay for eight months when he laid siege to Hyderabad in 1687. Aurangzeb succeeded and ended the Qutb Shahi reign that year and took Abul Hassan Tana Shah, the last Golconda king, captive