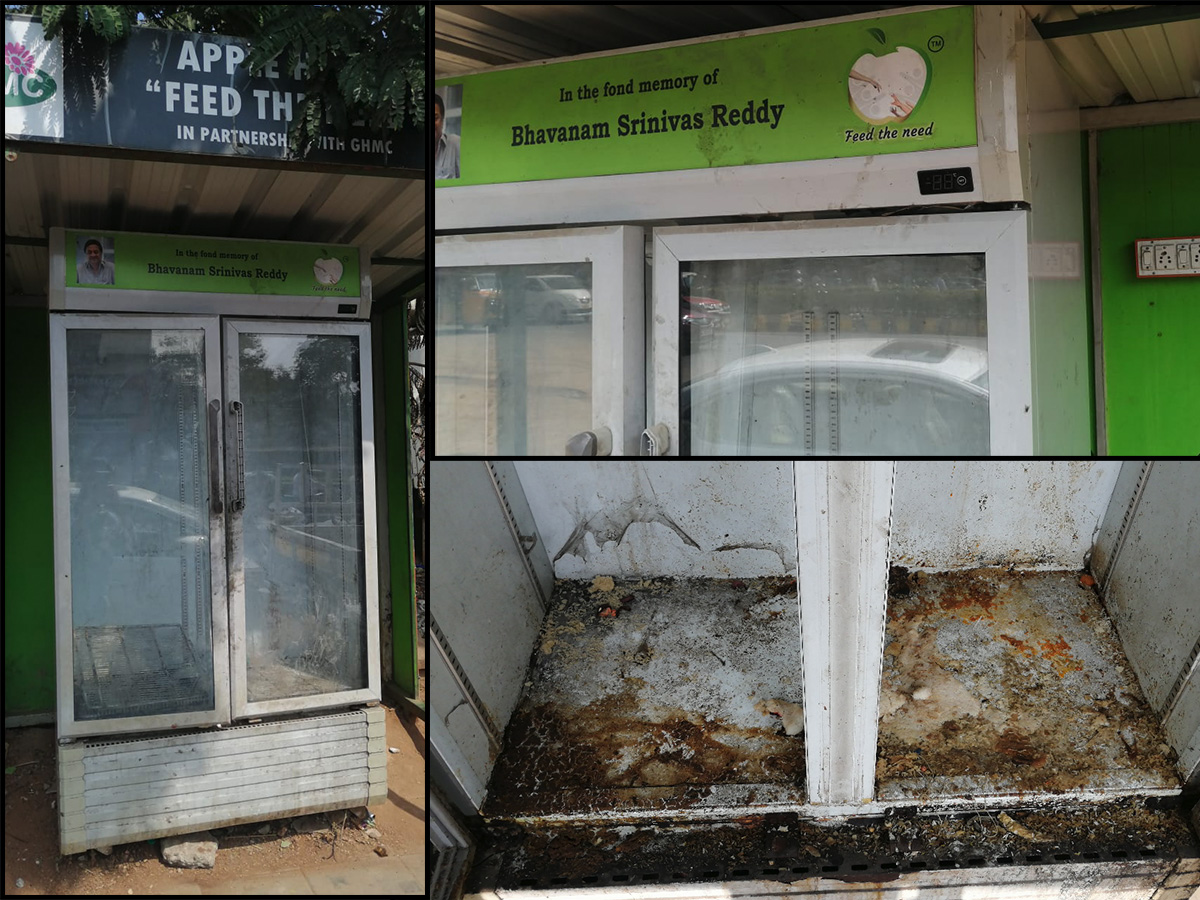 Hyderabad: It has not been two years since the Greater Hyderabad Municipal Corporation (GHMC) in collaboration with Apple Homes, a city-based non-governmental organization took up the ‘Feed the Need’ initiative.  As many as thirty-five refrigerators, each of 530-liter capacity, were set up to store surplus food donated from homes, function halls and other places to make it available for the poor.

It received great response in the first year, with people voluntarily coming forward to donate their food. Now, many of the refrigerators are either left unattended and neglected or entirely damaged.

“This fridge has been dysfunctional for months now. It stopped working because of lack of power supply and further maintenance. People who brought food would then take it back,” said Prakash, a watchman at Sarojini Naidu Eye Hospital in Mehdipatnam. A fridge has been st up right next to the hospital.

One such fridge at Tolichowki looks even more disgusting. It gives foul smell, as it has not been cleaned for months. An employee of the food court that is set up in close proximity to the refrigerator said: “Our customers would often leave leftover food in the fridge. Now, they just throw it away or feed the dogs, if there are any.”

Dr. Neelima Arya, social entrepreneur and founder of Apple Homes is beyond distraught as her idea of feeding the poor remained a foiled one due to the civic body’s nonchalance. “We took up this initiative as a joint effort. While GHMC provided us with several places and power supply, the NGO took expenses of the refrigerator and maintenance. We also signed an agreement to this effect,” she said.

“Frequent disruptions in power supply and poor personnel management and efforts led to this. I cannot do this alone, I need their co-operation and help. The entire process must be streamlined,” she said.

When we contacted the authorities of the GHMC, they remained unreachable.

Launched in February 2019, ‘Feed the Need’ kicked off with the setting up of a food bank in Madhapur. In that month alone, an estimated one lakh people benefitted from the initiative, GHMC said previously.

Similarly, the ‘Wall of Kindness’ initiative launched in 2017 to enable people to donate clothes, blankets, shies, etc. has also gone kaput. The walls now are layered with dust and garbage and the paint on the walls has now become shabby.