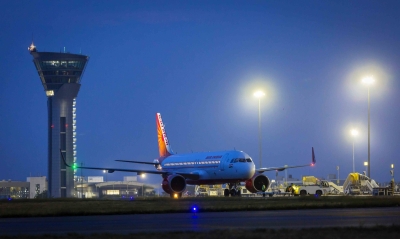 Hyderabad, Jan 27 : GMR Hyderabad International Airport Limited (GHIAL) on Wednesday announced that it successfully priced an offering of US$ 300 million bond in the international bond market.

GHIAL, a subsidiary of GMR Airports Limited and a step down subsidiary of GMR Infrastructure Limited (GMR Group), entered into a purchase agreement to issue and allot US$ 300 million, 4.75 per cent senior secured notes of five year tenure.

The proceeds from the notes will be used towards the capital expenditure for expansion of the Rajiv Gandhi International Airport at Hyderabad to increase its capacity to 34 million passengers per annum.

“We are delighted on the successful pricing of this transaction. The offering through GHIAL reinforces our ability to raise funds from the International Bond Markets and reflects our continued effort to create value for our investors and raise capital for growth. The successful pricing of the offering underscores investors’ confidence in GMR Group and credit strength of GHIAL,” said Grandhi Kiran Kumar, Corporate Chairman, GMR Group.

GHIAL is promoted by the GMR Group (63 per cent) in partnership with Airports Authority of India (13 per cent), Government of Telangana (13 per cent) and Malaysia Airports Holdings Berhad (MAHB) Group (11 per cent).

The company was incorporated to design, finance, build, operate and maintain a Greenfield airport at Shamshabad, named as Rajiv Gandhi International Airport (RGIA), Hyderabad. RGIA was commissioned in 31 months and inaugurated on March 14, 2008, with an initial capacity of 12 million passengers per annum (MPPA) and 150,000 tons of cargo handling capacity per annum.

The project has the flexibility to increase capacity and is currently being expanded to accommodate over 34 MPPA.