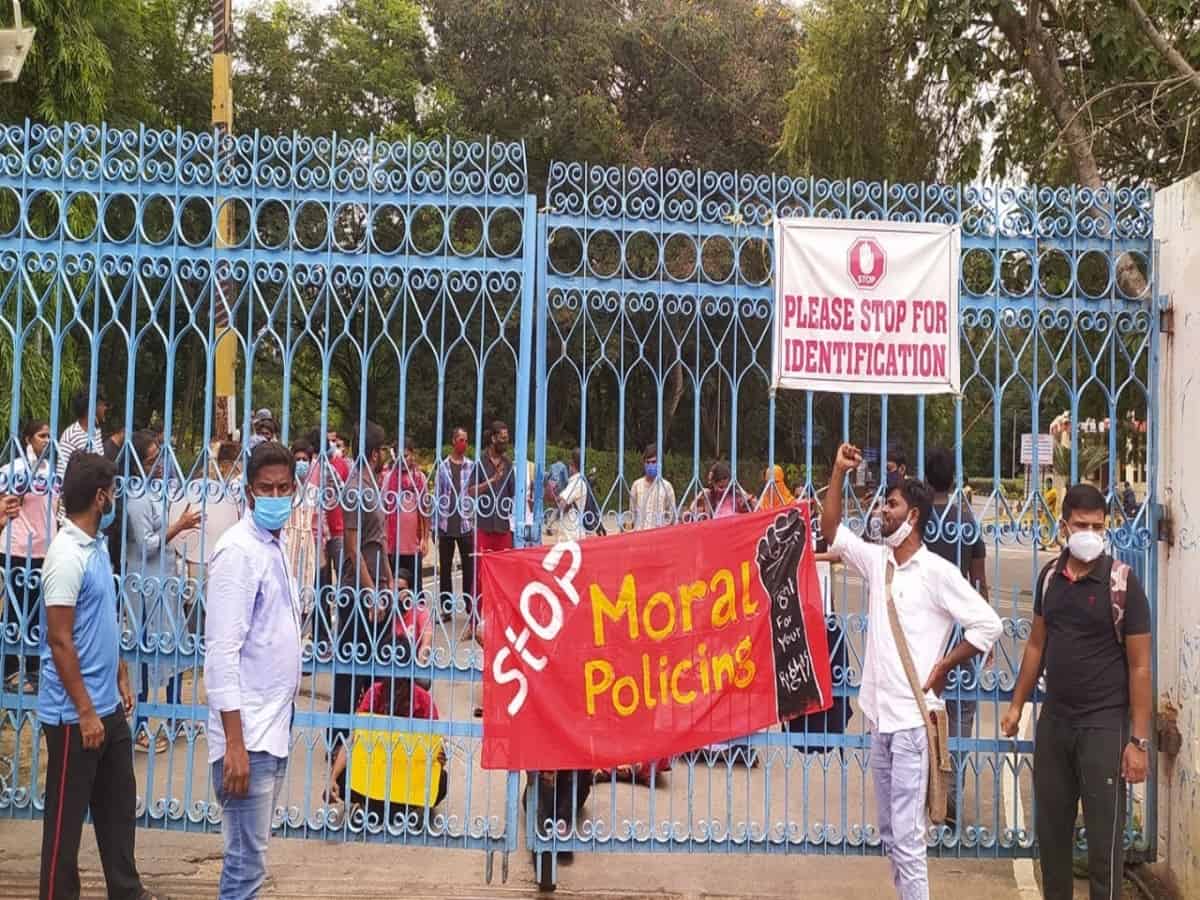 Hyderabad: Students at University of Hyderabad on Monday staged a protest against the “moral policing” and “personal targeting” of students by the University security unit.

On a call given by the Students’ Union, the students blocked the main gate in protest. Carrying placards and raising slogans, they denounced moral policing and curbing of spaces on campus.

“In an unprecedented manner, the university has implemented surveillance mechanisms on students and even permitted the contract security staff to record individual student movements on their personal mobile phones. This has stooped to an extent of harassing and policing female students by the security officer and the unit,” said Union President Abhishek Nandan.

“This is the time that we stand together and give a message to the admin that if our spaces are not given to us, then we’ll not sit quietly and we’ll occupy the spaces that are yours,” the Union said.

Demanding removal of security from hostel entrances, the Union urged the university administration to ensure privacy and stop personal targeting of students. The demands also include the safeguarding of students’ right to dissent and democratic forms of protest and no bypassing of the grievance cells and proctorial board.

This was the second protest by the students on the campus. They earlier organized ‘mashaal juloos’ (torchlight procession) on the night of July 2.

The Union had earlier lodged a protest with the Vice-Chancellor over what it called by-passing of democratic bodies that are conceived to deal with indiscipline, misconduct, and discrimination.

In its letter to the Vice Chancellor, it complained that CSO and Registrar office have been single-handedly issuing punishment orders without involving the Proctorial Board and GSCASH (Gender Sensitisation Committee Against Sexual Harassment).

“Students are slapped with a penalty of huge amounts (in most cases Rs 20,000 each) without any enquiry. The Registrar and CSO office have forwarded two cases to Telangana Police rather than directing them to the Proctorial Board,” the Union wrote.

It also complained about the moral policing by the security department, alleging that the administration is deploying security to intrude into the social lives of students.

“Students are being harassed and ridiculed for their interpersonal relationships which is against the progressive nature of any university campus. The surveillance mechanism of UoH administration is trying to expand on student lives is extremely absurd and condemnable,” it added.