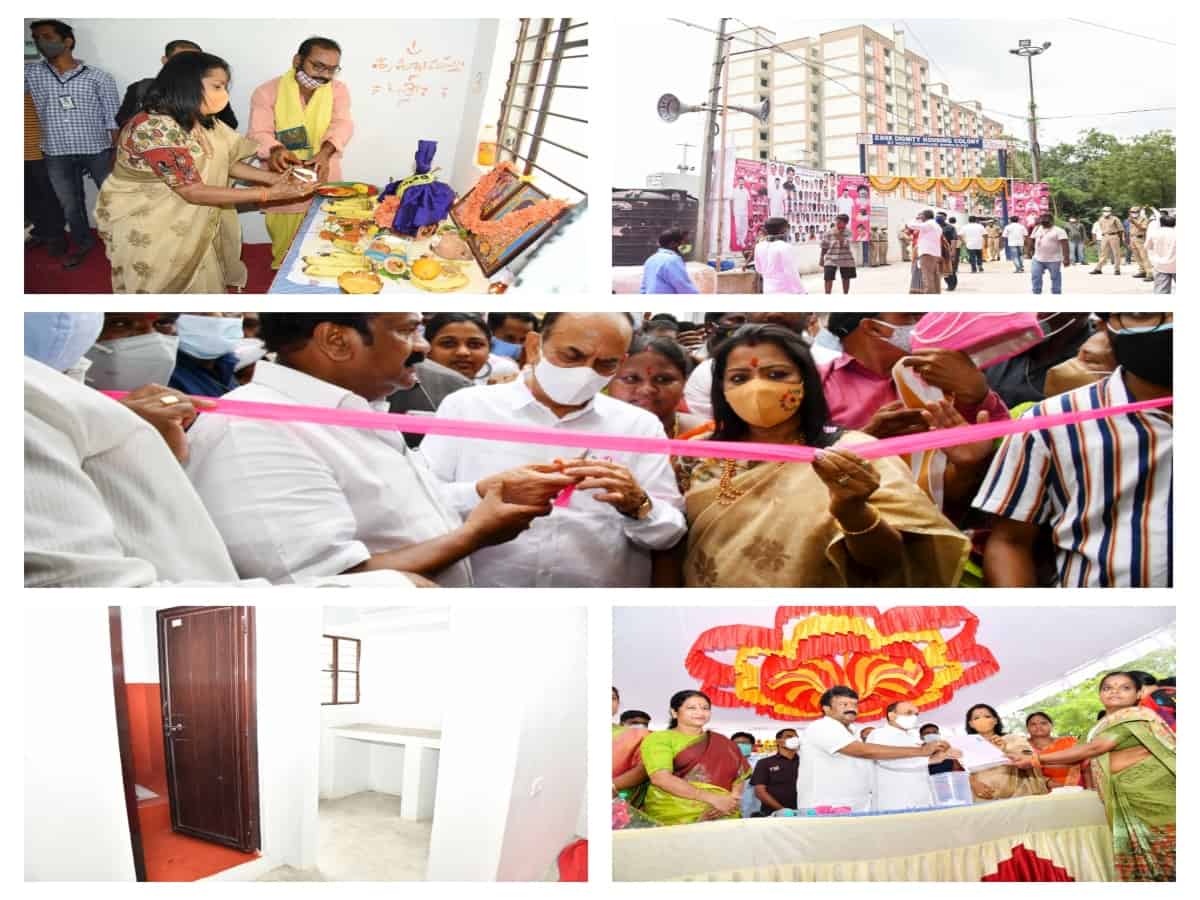 Hyderabad: Around 180 families on Thursday were handed over the keys of newly-constructed 2-bedroom hall kitchen (BHK) houses in the Bansilal Peta division at GYR compound, which falls under the Sanath Nagar constituency.

Earlier, Bhumi Puja was held for the construction of a new temple on the premises of the colony.

Speaking on the occasion, home minister Mahmood Ali said that Telangana chief minister K Chandrasekhar Rao is the only one in the country who is building double bedroom houses and providing financial assistance for marriage under Kalyana Lakshmi and Shadi Mubarak schemes.

Minister Srinivas Yadav announced that double bedroom houses would also be constructed in five months for the poor Muslims living next to the GYR compound.

The TRS government launched the Dignity Housing Programme, to provide shelter to eligible beneficiaries belonging to the Economically Weakest Section (EWS). A total 672 families were handed over the houses, out of the 784 people from the economically weaker sections who will get houses under the government’s flagship housing scheme within the next two weeks.

The TRS government will also inaugurate the double bedroom homes on July 5.

Greater Hyderabad Municipal Corporation (GHMC) mayor Gadwal Vijayalakshmi on Thursday on the occasion of urban development program said that special programs will be conducted throughout the month of July for the prevention of seasonal diseases like dengue and malaria in the wake of the current monsoon season.

The mayor launched an awareness program for the prevention of seasonal diseases conducted by the department of Entomology after planting seedlings in Colony Park.

Speaking on the occasion, Gadwal Vijayalakshmi said that the Urban Progress Program has been launched for ten days from July 1 to live up to the standard of living.

The mayor appealed to the city dwellers to make the city of Hyderabad a binless city as part of the solid waste management regulation and to make it a duty for everyone in their homes to clean autos as garbage bins are removed. With the onset of the monsoon season, there is a possibility of outbreaks of waterborne diseases and infectious diseases.

Vijayalakshmi said that besides removing water reservoirs that are likely to produce mosquitoes, anti-larval programs as well as larval control measures in ponds and latrines in the city and laying of oil balls have been taken up.