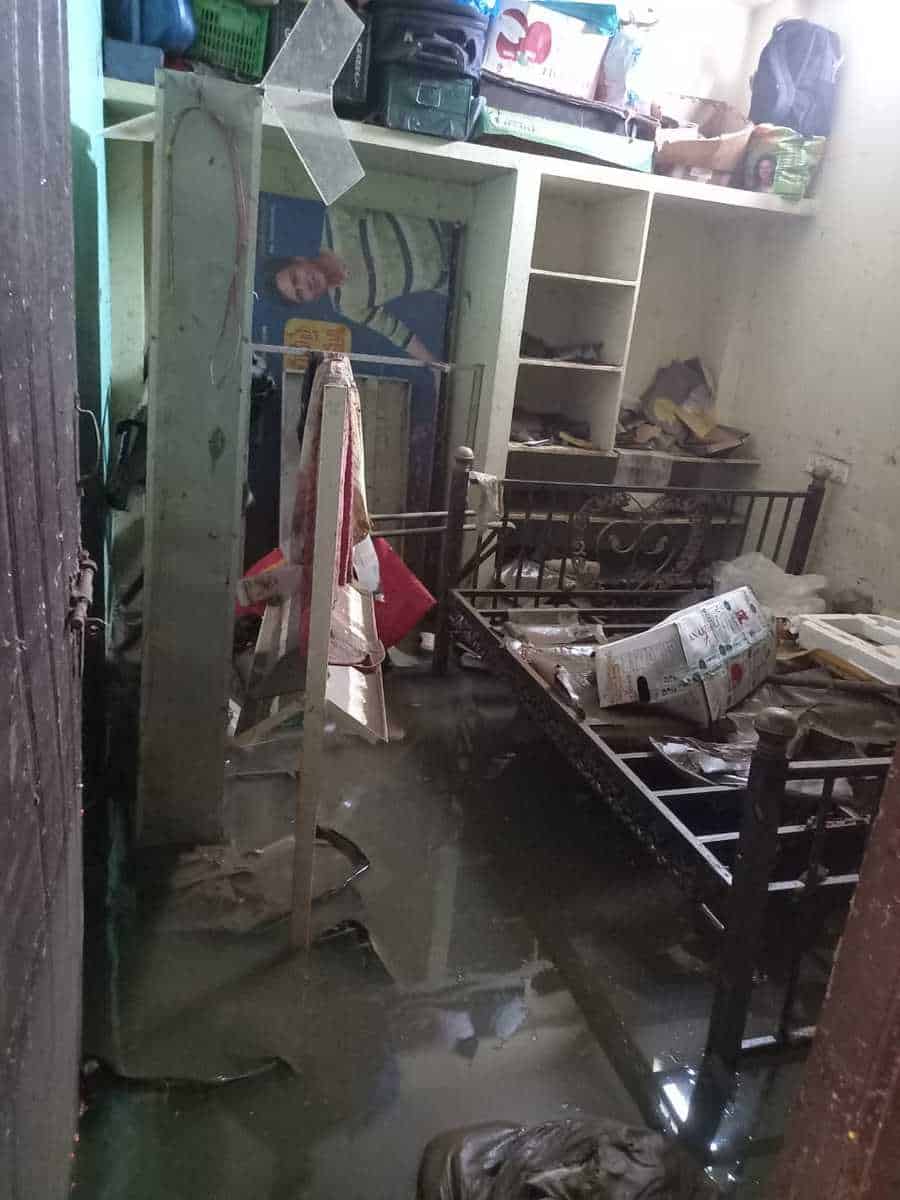 Hyderabad: Mohammad Sajid Khan still finds himself haunted by last year’s floods. A resident of Al-Jubail colony in Old City’s Falaknuma area, he is now used to witnessing floods in his locality. Last night, when the rains wreaked havoc, Khan helped rescue around 40 people in his locality whose houses started to fill up with rainwater much to their horror.

When asked about the floods in Hyderabad in October 2020, Sajid told Siasat.com that he helped around 300 people last year by rescuing and relocating them from unsafe spaces to safer areas. “The entire area was flooded and water rose up to ten feet. Many auto drivers saw their autos get swept away. I was still fortunate because I managed to find my auto and hold on to it. What would I do without it?” he asked.

Khan’s story while unpleasant isn’t peculiar to him alone. Imran Taj, a daily wage worker from Moosanagar spoke of how his washing machine, his bike and all the money and jewelry he had painstakingly saved for his sister’s wedding got swept away in the floods.

“Kabhi kabhi rona bhi aata hain. (I sometimes feel like crying),” he said. “I had to take a loan of Rs 1,50,000 to cover my sister’s wedding expenses. I couldn’t find work during the lockdown and now I have to pay Rs 500 every day to pay off the loan I took for my sister’s wedding.”

The floods of 2020 have borne witness to countless such stories. It has affected countless lives and even now the victims of the floods struggle to cope with their day-to-day existence. The Chief Minister’s Flood Relief Fund which was supposed to pay Rs 10,000 to all the victims hasn’t proven to be useful. In fact, as Sajid Khan noted, “I am yet to receive the money from the Fund and I don’t trust the government anymore.”

And many like Sajid Khan are now a worried lot, given that Hyderabad and Telangana have been witnessing intermittent thundershowers and heavy rainfall over the past one week. While flooding is a regular affair in the city, Hyderabad and those affected by the floods last year have not fully recovered yet. Many live in fear of another calamity, given that they have had to rebuild their lives from scratch.

The answer to why the city gets flooded is far more complex than we realize. The state government has time and again remarked that because the drainage system is over 100 years old and owing to erratic rainfall, the problem continues. But that is not an excuse, given the fact that a good chunk of the city is devoid of a proper drainage system.

According to a weather bulletin by the Indian Meteorological Department (IMD), a prediction of heavy rainfall has been issued for Telangana. A day earlier on Wednesday, several parts of Hyderabad witnessed moderate to heavy rainfall, which lasted for hours. For July 16 and 17, the IMD has predicted that parts of the state will witness heavy rains and thunderstorms.

However, as Anant Maringanti, an urban researcher and director of Hyderabad Urban Labs (HUL) has a different take on the floods. “The problem with Hyderabad is that because it is uneven terrain, the water can go to multiple places and the chaotic drainage system does not aid it. When the tanks get overburdened which they did last October, the bunds aren’t able to contain the water and they get breached,” he explained,

Maringanti added that during former chief minister YS Rajasekhara Reddy’s period over a decade ago, a government order stipulated that the gates of the bund meant to relieve water weren’t to be opened as it could affect real estate. “However, with no outlet available, the streets start flooding,” he pointed out.

The interim relief for the victims isn’t available either. Like Sajid, scores of people aren’t able to access Rs 10,000 promised to them by the government. As an unnamed Mee Seva official notes, “There was some money given to a few victims. However post the GHMC elections in December, 2020 this matter was completely sidelined and made zero progress.”

Bringing some weight to the issue, Maringanti remarked, “The response to floods has to be to establish a flood commission which can take cognizance of the situation. We need to build a stronger drainage system that can drain off the water. The Municipal corporation isn’t equipped to deal with the situation as things stand and hence we deal with the same problem over and over again.”

As things stand, the city might see a new of set of flood victims who might need support all over again.