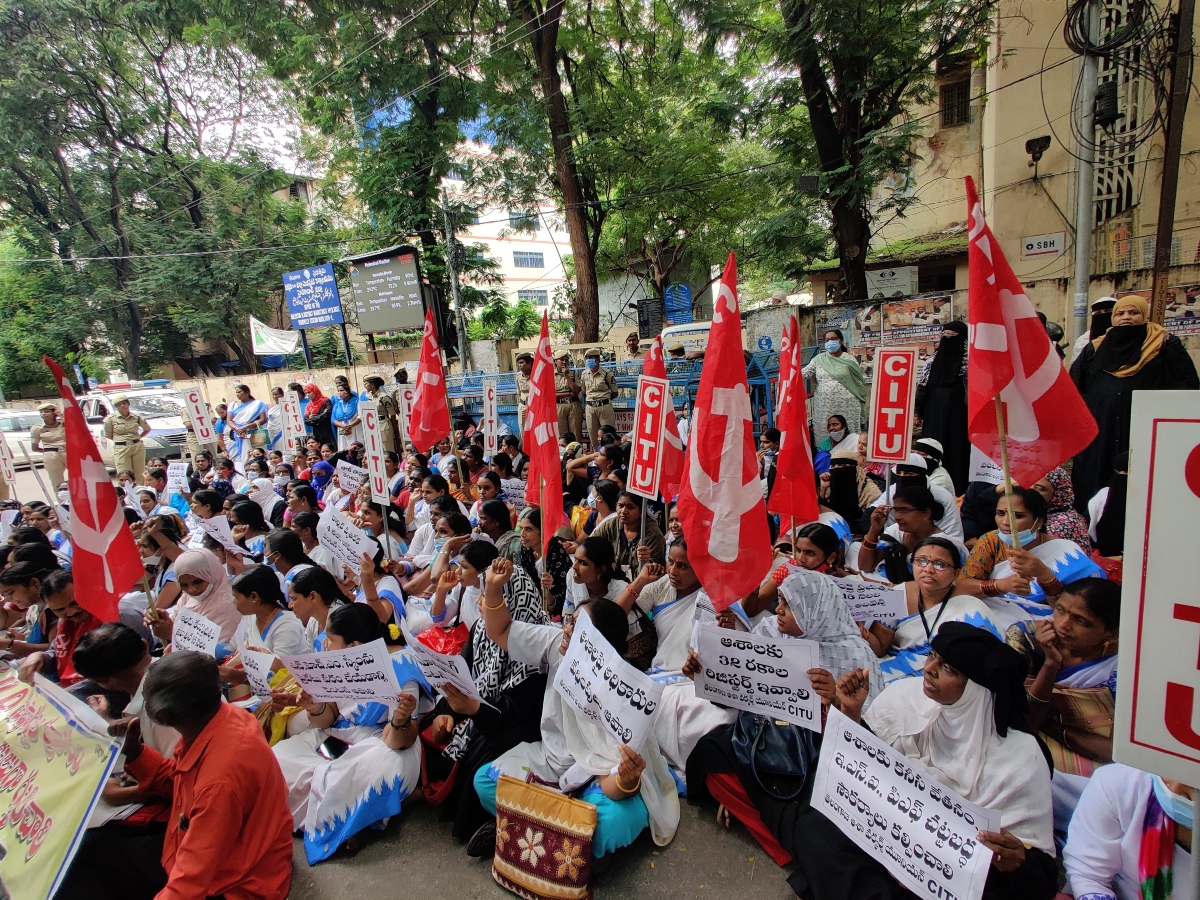 Hyderabad: Accredited Social Health Activist (ASHA) workers on Monday staged a protest in front of the district collector’s office in Nampally on Monday. They demanded regularisation of their jobs as workers, and a stable salary of Rs 10,000 per month and workers’ rights. The protest was conducted with support from CITU (Centre of Indian Trade Unions).

M Meena, ASHA worker and CITU leader, said that their demands have to be acknowledged for the hard work that they do. “It is because of our work that WHO recognised Telangana and even presented the global health leaders award. Andhra Pradesh has a standard salary for ASHA workers. But in Telangana, we receive less than Rs 9000 per month. The amount keeps changing- sometimes dropping to Rs 7000,” she added.

The workers demanded that they be made official employees with government benefits. ASHA workers who were protesting said that they deserved a pension fund, health insurance and job security. All of those things are absent so far in their profession.

Another ASHA worker, Kavita, said that their work had increased in the last few months. “Around 4 months ago, we were assigned tasks of filing data related to Non-Communicable Diseases (NCD). There are quotas to reach every day according to which area the worker is assigned to,” she told Siasat.com. She added that they had to fill somewhere between 50 to 200 forms per day along with their everyday duties.

“ASHA workers were given phones for this kind of data entry. Filling hundreds of forms written in a tiny font on a smartphone is a strenuous task. With this additional work, however, there has been no increase in monthly salary. Additionally, we were told that failing to fill our quota would result in the issual of a memo. Upon collecting three memos, the worker would be fired and replaced,” she said.

The protesting ASHA workers also spoke about Sujata, a worker who recently passed away due to the stressful nature of their job. She would work till late in the night, filling data forms before she was hospitalised for heart problems in Yashoda hospital. The Telangana government gave her family Rs 20,000 and footed the hospital bill. The Rs 1 lakh relief amount hasn’t been sanctioned, said her coworkers.

The protest by ASHA workers on Monday morning was soon dispersed as it blocked traffic. The district collector could not be reached for a comment.