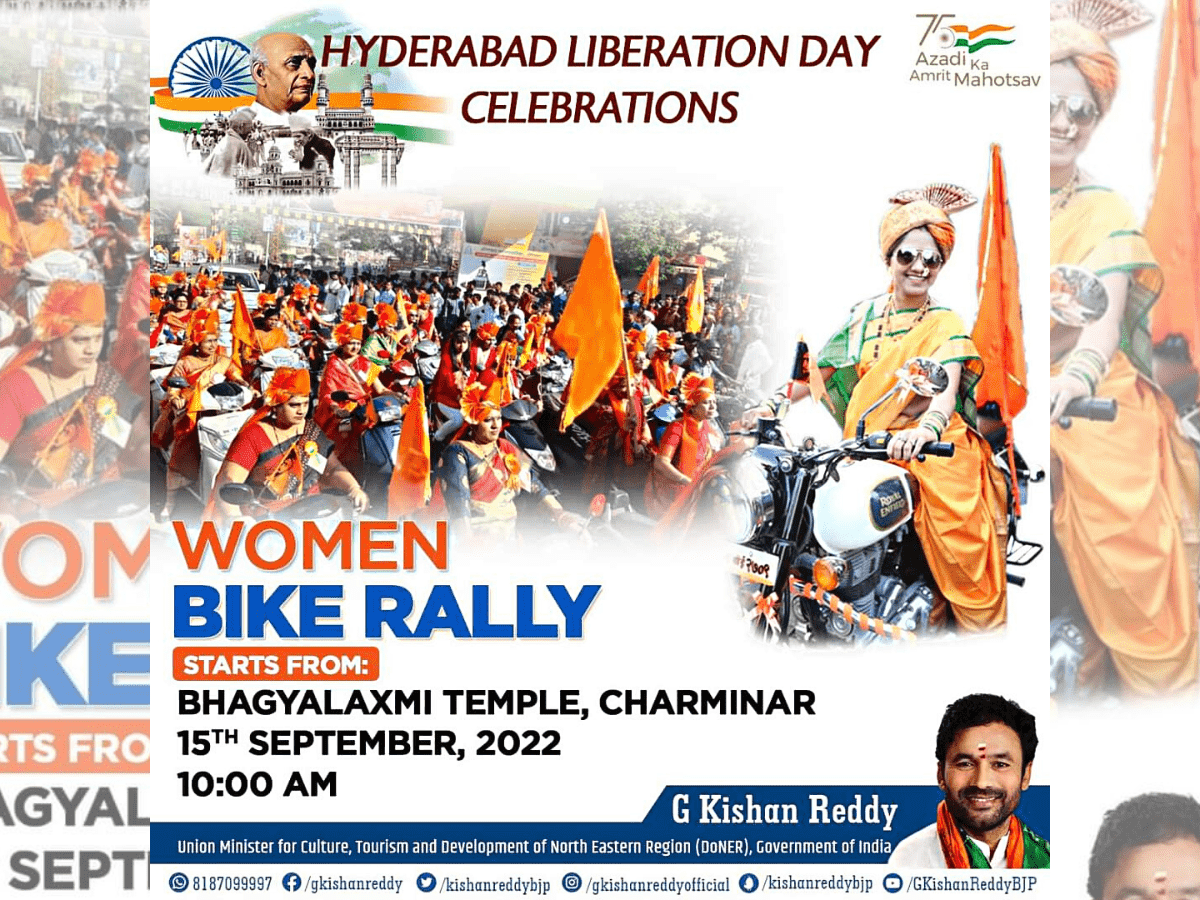 Hyderabad: An all-women bike rally by the Bharatiya Janata Party (BJP) will be taken out from Bhagya Laxmi Temple at Charminar on Wednesday coinciding with the Hyderabad Liberation Day celebrations.

The rally will be taken out by the women’s wing of the saffron party and supported by other affiliated groups. It will start at 10 a.m. A few hundred members of the Bhartiya Janata Party women wing will participate in the rally that will culminate at the BJP State office.

The Union government and the Bhartiya Janata Party plan to hold yearlong celebrations in erstwhile Nizam State comprising districts of Telangana, Maharashtra, and Karnataka on a grand scale.

Union Home Amit Shah will be visiting the city on September 16 and 17 to participate in the Hyderabad Liberation Day program. The Minister will host the national flag at the Parade Grounds on September 17 mornings at 8 a.m.

The BJP is making all arrangements to mobilize huge crowds for the program from the districts across Hyderabad.

In a clear push to politically capitalise on historical events, the Bharatiya Janata Party (BJP)-run central government will organise a year-long ‘celebration’ marking ‘Hyderabad Liberation Day’ starting from September 17. Union Home Minister Amit Shah has also been invited for the same. On that date in 1948, the erstwhile state of Hyderabad run by its Nizam, Osman Ali Khan, was annexed to India.

In a letter addressed to the chief ministers of Telangana (K. Chandrashekhar Rao), Maharashtra and Karnataka, union culture minister G. Kishan Reddy invited them as guests of honour for the inaugural event of the ‘Hyderabad Liberation Day’ event in Telangana. The entire state, along with five districts of Maharastra and three of Karnataka, were part of the Nizam’s Hyderabad princely state.

The BJP union minister in his letter also noted that parts of Maharashtra and Karnataka which were under Nizam’s territory already observe ‘Marathwada Liberation Day’ and ‘Hyderabad-Karnataka Liberation Day’ every year. Every year the Bharatiya Janata Party’s state unit has also been demanding the current Telangana Rashtra Samithi (TRS) government observe ‘Liberation Day’ on September 17.