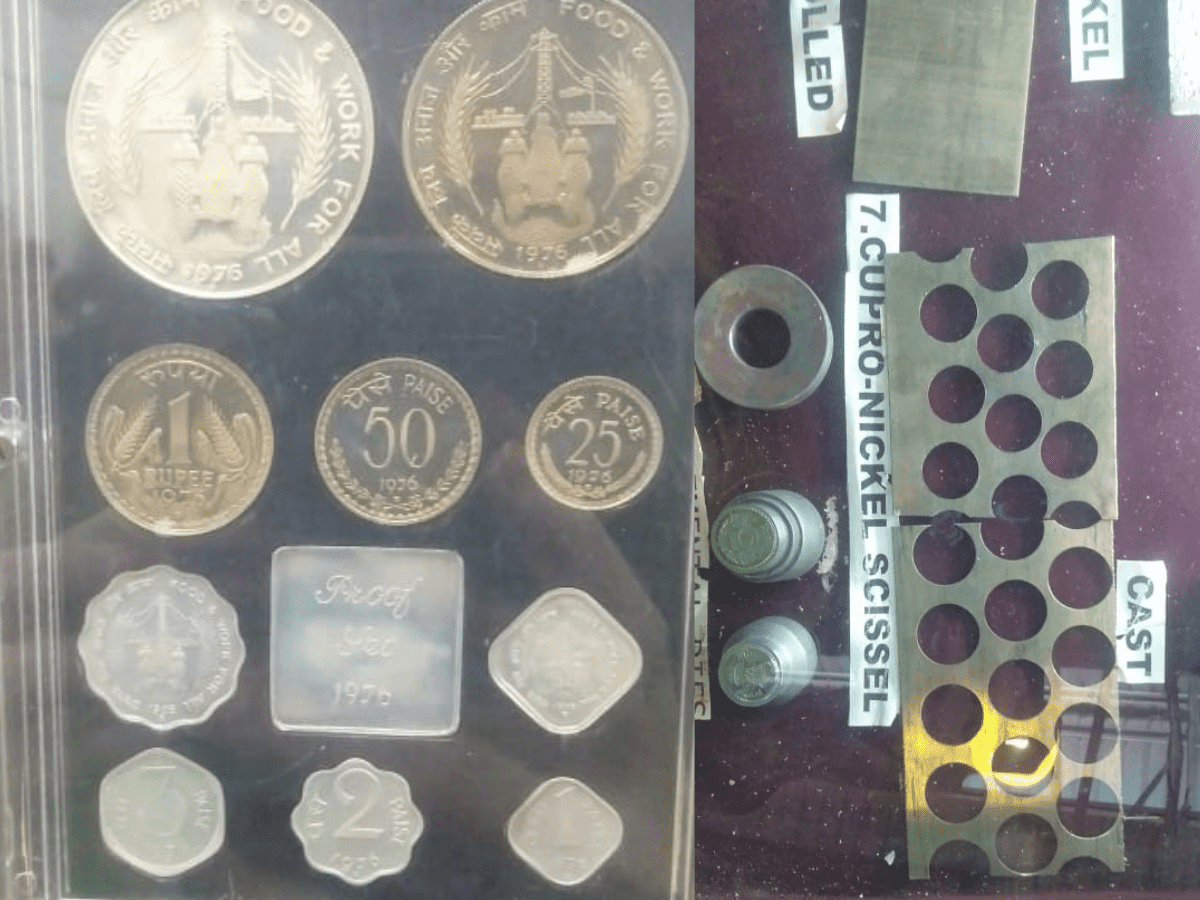 Hyderabad: The Coin Museum at the city’s Mint Compound at Lakdikapul was inaugurated on Tuesday, with the collection displaying a wide range of currency notes, coinage collections, old handheld tools used to make coins, and other materials like counter weights.

The museum is also being held to commemorate the 75th anniversary of India’s independence, which is being celebrated under the Centre’s ’Azaadi ka Amrit Mohatsav’ banner. It is open daily from June 8 to 13, from 9 am till 5 pm, for the general public (free entry), said government officials.

The Coin Museum in Hyderabad houses a diverse collection of historical coins from various periods, including the Mughal, Asaf Jahi (Nizam), and British Indian period.

Included in the coin museum was one of the oldest antiquities associated with Hyderabad’s Mint Compound. The stone that was used to make coins in Hyderabad city, where coins were physically produced on this stone with primal equipment is also on display. A photo of workers also shows using tools to produce coins.

Hyderabad: Coin Museum to be inaugurated at Mint Compound tomorrow

The Saifabad Coin Museum was inaugurated by chairman and managing director of the Security Printing & Minting Corporation of India Ltd, Tripti Patra Ghosh, in the presence of other government officials, and numismatic enthusiasts. The museum is being curated by Rehan Ahamed, curator of the Calcutta Mint museum.

Speaking with Siasat.com, Tripti Patra said “With the museum, we are marking the 75th anniversary of independence and hope to educate individuals about the country’s history and future. We want them to learn about the history and how the economy worked in the past. We want our generation/youths to understand how wealthy we were previously and how history works.”

In the coin museum, citizens get an opportunity to discover the history of currencies, from when Indians used grains as currency, to Native copper, meteorites or native iron, gold, silver, and lead ingots, and pepper notes as various.

How the coins were made:

In Hyderabad, under the Nizams (1724-1948), who were Mughal-appointed governors, coins were initially minter under their north Indian overlords. Later, after the Mughal empire fully ended after India’s first war of independence in 1857, the Hyderabad state began minting its own coins and currency. Hyderabad was the largest princely state in India then.

The rest of the country, administered by the British crown, produced its own coins and currency. At the Coin Museum, coins based on forms and those manufactured from various metals are also on display in the museum.

The focus of the exhibit is also on Republic India coinage, Commemorative coinage, and the Minting process, which is demonstrated through a video.

History of the Mint:

The Saifabad Mint, which dates back to 1903 and excelled in producing coins, notes, stamps, and other engineering goods, is a source of pride for the Deccan heritage.

In 1903, the sixth Nizam of Hyderabad, Mir Mahboob Ali Khan (1869-1911), constructed this Mint, which was modelled after European mints. Hyderabad was the only native state in India to be granted currency. The Saifabad Mint was the epicenter of coin minting, with a distinct place in Indian history and a reputation for great calligraphic quality.

The Saifabad Mint’s architecture and functionality are known for their structural stability. The entranceways are adorned with ancient gun barrels. The columns are made of steel and have intricate carvings on them. This engineering marvel has become entwined with Deccan life and commerce. It was made possible by the sweat and blood of hundreds of individuals who worked tirelessly. This is the country’s first living Mint Technology Museum, including Old Machines from 1903 in European style that produced the best coins known for their calligraphic quality.