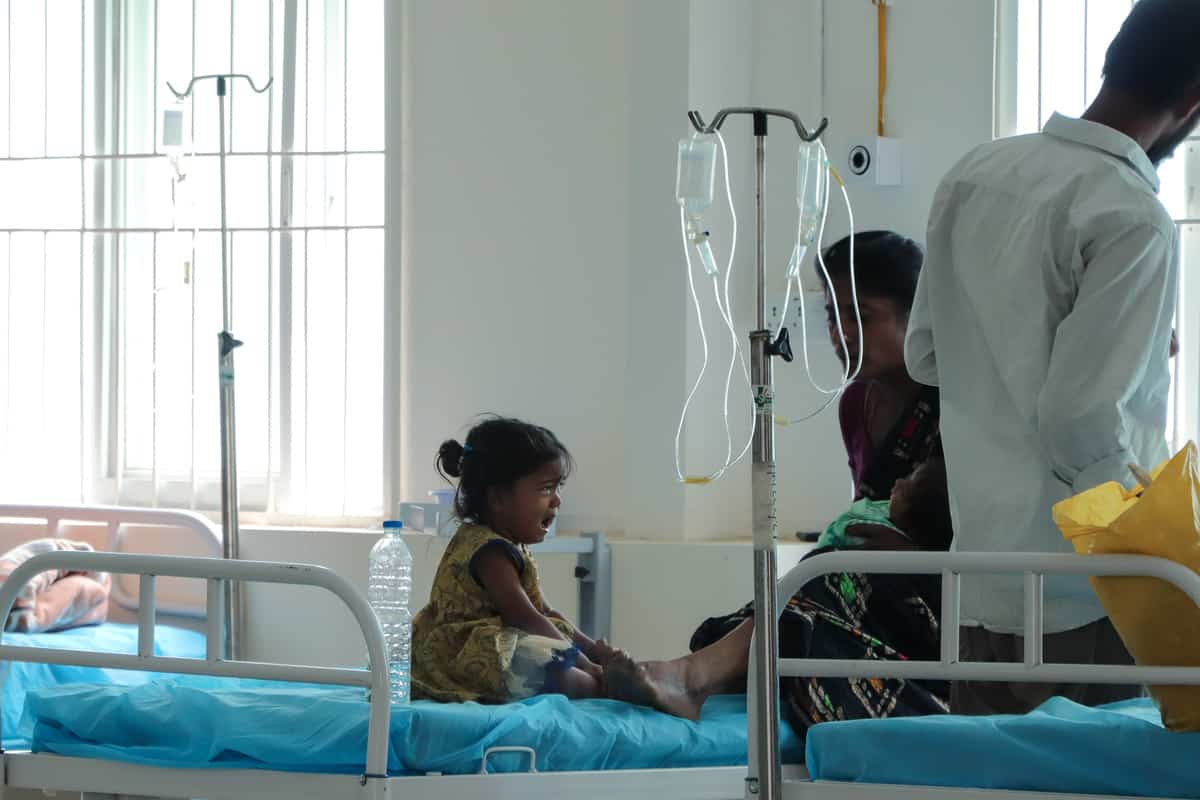 Hyderabad: Ten days ago, 45-year-old Hussainamma noticed the color of drinking water in her house change to green. Her family of six members consumed the water as they had no other choice, even after complaining about it to the owner of the house. Soon enough, she fell sick, and eventually had to be admitted to Kondapur government hospital.

Hussainamma was one of the several citizens who fell sick after consuming contaminated water about two weeks ago. The water they got came from the water supply lines of the Hyderabad Metropolitan Water Supply and Sewerage Board (HMWSSB). However, the matter is yet to be fully ascertained, as samples reportedly

“We are very replaceable. Now this illness has made us unemployable also. We haven’t gone to work for a week now.” Husainamma, a widow from Kondapur Basti said. She is a daily wage worker, and has a family of six people to look after.

In the last seven days, over 120 people have been hospitalized, and two people died owing to contaminated drinking water supply in their localities. The problem is spread across multiple locations and not just from one location as reported earlier. The areas affected so far are Shubhash Chandra Bose basti in Hafeezpet, Vaddera basti in Madhapur, Corporate colony in Chanda Nagar, and a Basti opposite KIMS hospital in Kondapur.

Residents of Vaddera basti, and Kondapur basti had been facing issues with their water connection for over ten days now. They said that they noticed a foul smell in the water, as well as a green coloured tinge to it. Many people started showing symptoms of sickness such as severe diarrhoea, vomiting, and high fever. However, people only started admitting themselves to hospitals after news of a community members’ death spread on Saturday (9 April).

“As soon as we got to know that people are dying of this illness, we rushed my daughter who had been sick to the hospital on Saturday night. My daughter and I are both widows. She has two young sons to look after. By Monday morning, I was hospitalized for the sickness too.” Vimala said, a resident of Vaddera basti. She works as a cook to support her family.

In the meanwhile, between Saturday night and Monday morning, Vimala’s two grandchildren were punished at school and not allowed to write their exam as the family had not paid their school fees yet. “The children’s mother and I were both hospitalized, we left the children with our neighbours. We later found out that our children were punished. How could we go when we have been sick for a week now?” she lamented.

There were at least 10 children under the age of five admitted at Kondapur government hospital undergoing treatment for the same sickness.

“My one year old son, and my three year old daughter have been vomiting since one week. The fever has decreased now. The doctor said it will take some more days before they are discharged.” Ramani, a 20-year-old woman from Shubhash Chandra Bose colony, in Hafeezpet said.

“Our house owner usually alerts us when there is any issue with water, however no message was given this time around. This has led to my children suffering.”

Ramani, Vimala, and Husainamma said that they reached out to their local community heads respectively about getting the water pipeline fixed. However, they said that much didn’t come out of it as no heed was paid to them. “They keep saying that they will get the pipes fixed but I don’t see it happening.” said Ramani

“We live in rented homes, and go for daily wage work. If we run around government offices over such issues, who will feed my family? The owners of our houses should take this up.” Husainamma said, while Vimala and Ramani seconded with her.

The medical staff at the Kondapur Government hospital said, “People have been coming continuously since Saturday with symptoms leading to gastroenteritis. We had to bring interns and staff from other hospital branches because we fell short of resources here.”

Meanwhile, the Medical Superintendent of the hospital, Dr. A Varadha Chary was unavailable for a comment. The water being supplied is being tested and emergency works are also being taken up by the Hyderabad Metropolitan Water Supply and Sewerage Board (HMWSSB), Siasat.com has learnt. Locals also said that officials have washed-off responsibility.

The issues residents in these affected areas have faced sadly is not new, as other areas like Bholakpur like have seen similar issues, wherein dirty water was supplied.