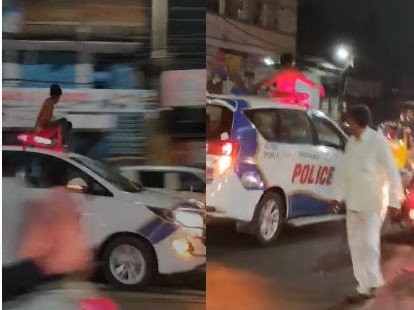 Hyderabad: A man, who was in inebriated condition, created ruckus in Asif Nagar area of Hyderabad by climbing on to a moving police patrol car.

The incident occurred late on Monday night in Jhirra locality. A video of the man sitting on a moving police vehicle went viral over social media on Tuesday.

The man, who was later identified as Ajay Singh (28), damaged the windshied and side mirrors of the police patrol car.

The police patrol had reached the area after receiving information that a youth created ruckus and attacked some vehicles.

When the police team reached there and the patrol vehicle was moving slowly to clear the traffic, the man took the cops by surprise as he climbed on the moving vehicles. He continued screaming and damaged the vehicle.

Police personnel finally overpowered the man and arrested him. He has been booked for creating nuisance and damaging public and private property.