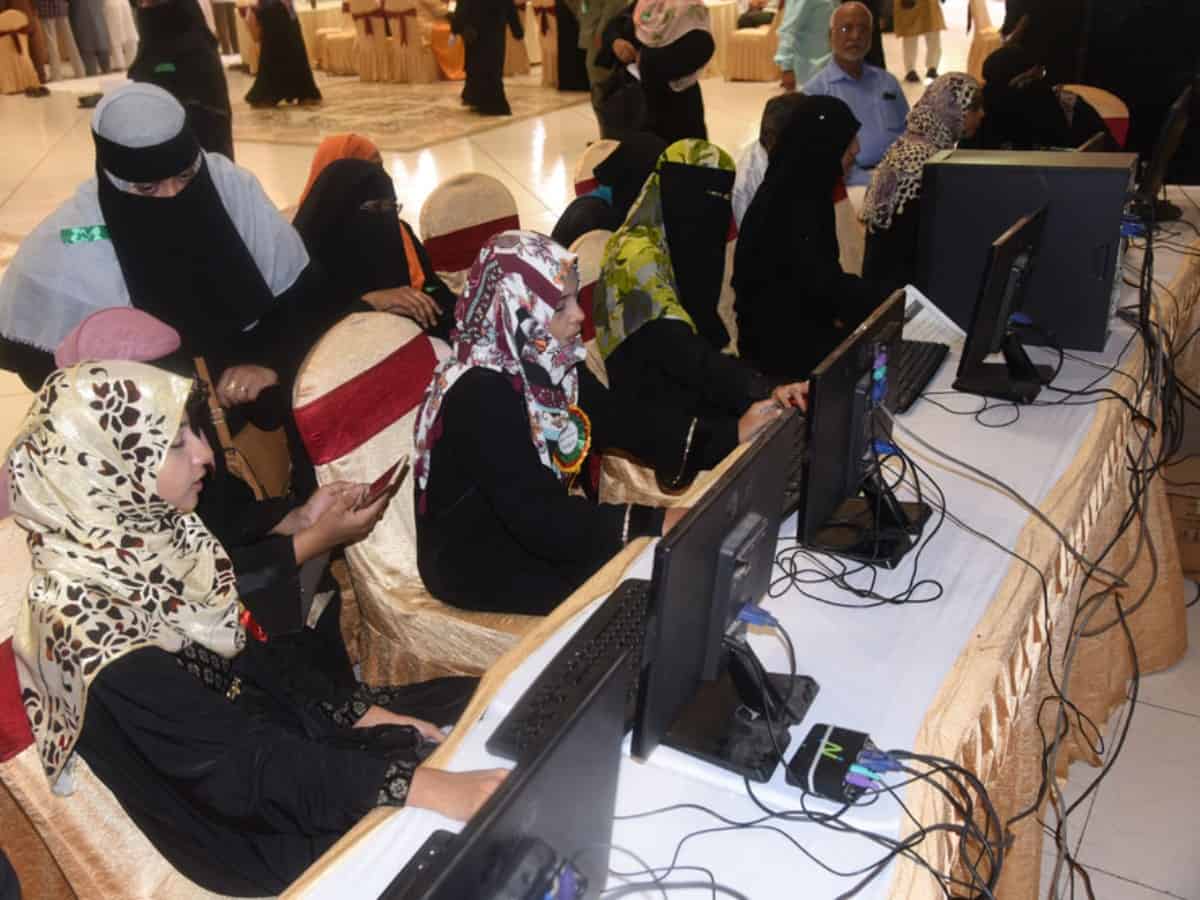 Hyderabad: Siasat and Millat Fund organized the 108th edition of “Du Ba Du matrimonial alliance program” on Sunday under the supervision of Zaheeruddin Ali Khan Managing Editor of Siasat Daily. The program started at 11 am at Kashish Convention, Near Metro Railway Station, Pillar No.1061, Musheerabad, Hyderabad.

The program was attended by a vast number of parents not only from Hyderabad but its suburban areas such as Bowenpally, Lalaguda, Balanagar, Secunderabad, Lingampally, Kukatpally, and other places.

Owing to the coronavirus pandemic, the program was not held in the city for some time. The parents and guardians were anxiously waiting for this program to resume. They were seen registering for the alliance of their daughters and sons and interacting with each other.

Speaking about the simplicity of nikah in Islam Mohammed Fazlur Rahman, a retired executive engineer, Water Department, thanked Khan for organizing this program to facilitate Muslim families. He said, “Nikah is a simple process of consent between both the parties in Islam. But due to many an-Islamic social practices, the Muslim marriages are rendered difficult these days. Thus, it is the call of the hour to revert to the simplicity of Nikaah.”

The Chairman of Crystal infra Mohammed Farooq highly appreciated this program by the Siasat Daily and thanked Zaheeruddin Ali Khan for this unique initiative for facilitating the anxious parents to find alliances for their sons and daughters. “The presence of such a big gathering is proof of how anxious the parents are regarding the marriage of their children.”

About the stability of matrimonial alliances, a distinguished guest Dr Shaikh Siadat Ali said,”The un Islamic practice of demanding dowry from the girl’s parents has no basis in Islam. Extravagance is an evil practice. The simple practice of Nikah can save the parents from such extravagance which cannot guarantee the success of a marriage. The only guarantee of the stability of marriages is the personal conduct and good behaviour of the marrying parties.”

Some of the other distinguished guests of the program were Mohammed Amjad Managing director of Crystal infra, Akbar Syed Sharafatullah Municipal engineer and others who have highly appreciated this initiative by the Siasat Daily and expressed their personal gratitude to Zaheeruddin Ali Khan.

Like the earlier editions of this program, different counters were set up according to educational qualifications of men and women such as medicine, engineering, B.Ed, post-graduates, graduates, Inter, SSC, Hafiz-e-Quran, Aalims and for those interested in second marriages, late marriages and are physically challenged.

The program coordinator Khalid Mohiuddin Asad oversaw the arrangements of this program and his team of volunteers helped the parents to prepare and register bio-datas of their sons and daughters. The registration fee was Rs.250. The participants’ hands were sanitized and they were seen following the covid-19 protocols strictly throughout the program till its conclusion.

The program was directly broadcasted on Siasat’s Facebook page which was seen live by thousands of people in foreign countries like Australia, Pakistan, Saudi Arabia, Doha Qatar, Dubai, Canada and USA. All these viewers highly appreciated this program.

At the successful conclusion of the program, the coordinators expressed their gratitude to the owner of the Kashish Convention, Syed Naeemuddin as well as the directors of Crystal Infra Mohammed Farooq and Mohammed Amjad and officials of the Police Department.