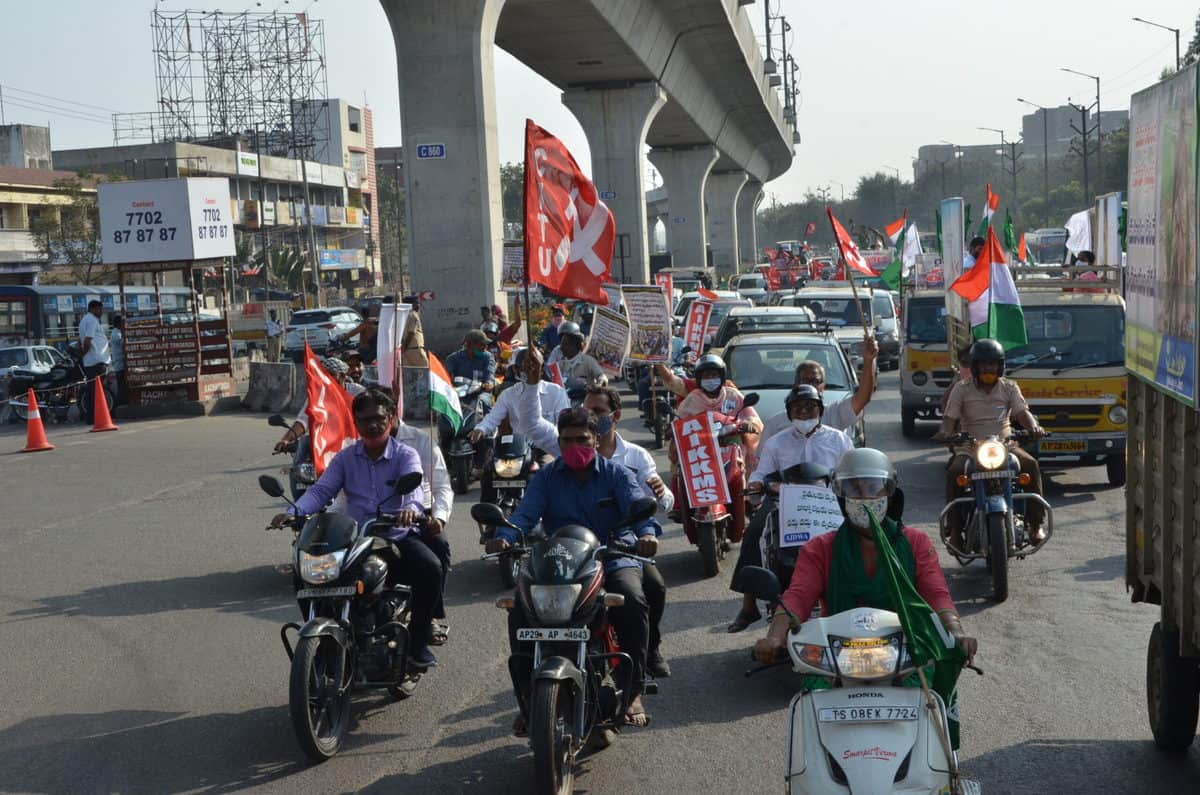 Hyderabad: Farmers here took out an 18-kilometre ‘Vehicle Parade’ in protest against the three farm laws and to pledge their support to the ‘tractor rally’ carried out by their counterparts in Delhi on the eve of India’s 72nd Republic Day.

The farmers are protesting against three controversial agricultural laws, demanding their repealing and the legalized procurement of crops at the Minimum Support Price (MSP).

A massive rally of farmers took an 18 km vehicle parade on Republic Day from Saroor Nagar to Uppal X roads on Tuesday.

The vehicle parade was called by the All India Kisan Sangharsh Coordination Committee (AIKSCC), an umbrella organization of over 50 farmers unions, from Saroor Nagar stadium to Uppal X roads. The march started around 2 pm with more than 2000 farmers from various districts of Telangana and Andhra, who had come to Hyderabad for the rally.

A convoy of vehicles held a ‘Kisan Parade’ raising slogans against the BJP government and demanding the repeal of the agricultural farm laws implemented by the Centre.

More than 2000 farmers joined in the vehicles rally, including various farm unions, trade unions, IT employees, activists groups and teachers.

Leaders of several major unions including CITU, AITUC, IFTU, TRS-KV and TNTUC participated in the rally. They declared that the unions will support farmers’ protests against the three ‘black’ farm laws brought by the Centre.

Speaking at the protest, Kiran Vissa, a member of AIKSCC said that the farmers’ protests will continue and be intensified across the nation and also in Telangana in the coming days.

Kiran Vissa also claimed that there is false propaganda by the BJP government about these farm laws being made for the benefit of farmers.

“The historic farmers’ struggle is a struggle to preserve democracy in the country and to assert that the government cannot pass laws which affect the lives of millions of people without democratic consultation, and by ramming them through Parliament without discussion and referring them to a parliamentary committee,” Kiran Vissa told siasat.com.