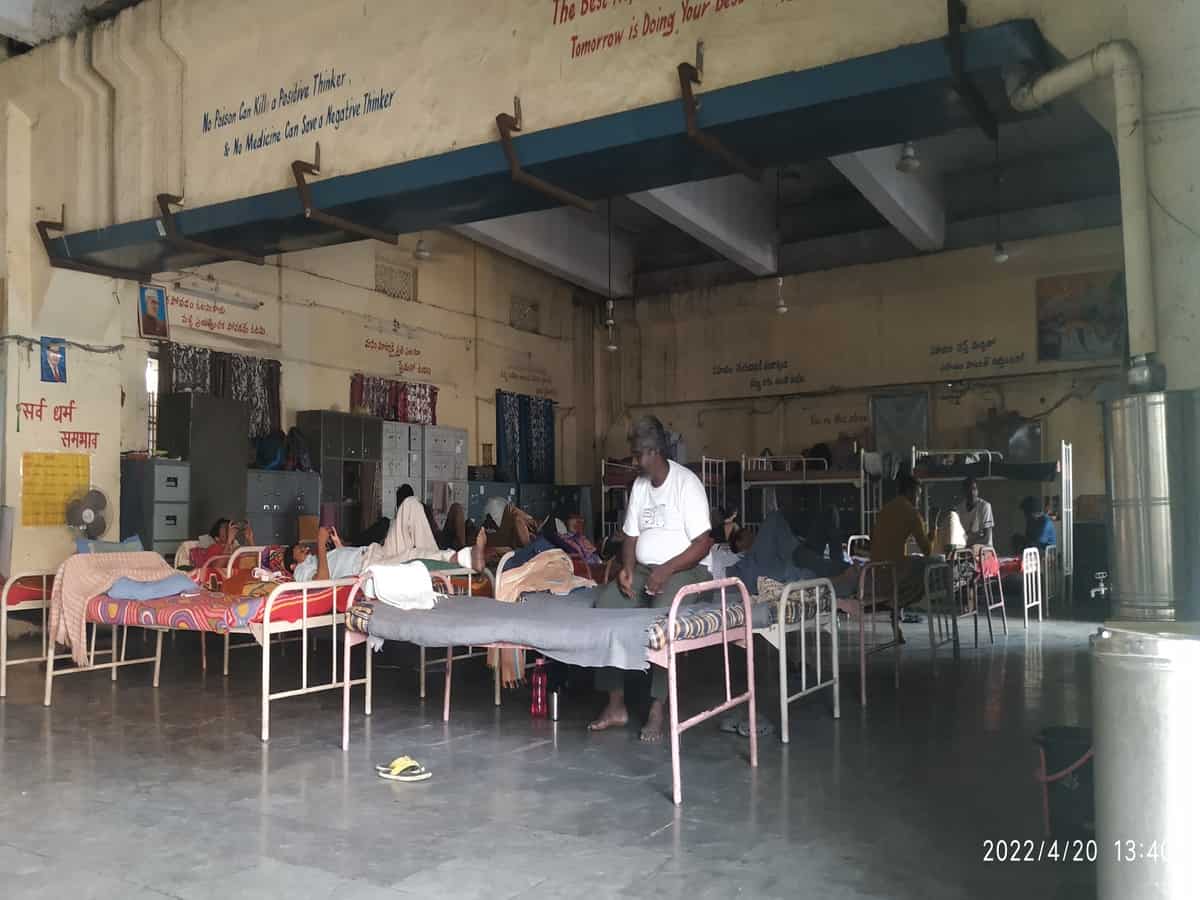 Hyderabad: Eight months ago Ramana Reddy (50), a victim of alcoholism came to the city in search of livelihood. When the plan failed, he found himself sleeping on a footpath at Begumpet in the city.

A kind samaritan then pointed him to a Greater Hyderabad Municipal Corporation (GHMC) Shelter for Urban Homeless (SUH).

“While I was just about to sleep on the footpath, a passerby told me that I could sleep inside the shelter just by providing my Aadhar card,” said Reddy.

There is no looking back for him ever since. With the help of the management at the GHMC – SUH, he now works as a security guard with Agile Security Force Private Limited and earns a salary of rupees 20,000 per month. He said, “I keep a few thousand to myself, and send the rest to my family. I have a wife and son, but we are estranged.”

He meets his family once a month, subject to the availability of leave at his job. Reddy makes it clear that he is happy to have weaned off of alcohol and prides himself on being able to be the breadwinner for his family.

Siasat.com visited the GHMC SUH for men situated under the Begumpet flyover. The spacious room can accommodate up to 45 men between the ages of 18 to 55. The place is also equipped with various facilities such as a 2×2 footlocker for the ‘residents’, three desktop computers, clean drinking water, a television, a rack of books in various languages, and beds. Food is provided three times a day, usually prepared on-site with the help of the ‘residents’.

About Shelter for Urban Homeless:

It is one of the 14 SUHs established under a joint government scheme, and run by a nonprofit service society called Aman Vedika. The funds for the project are shared between the center and state in a 75:25 ratio.

The manager of the facility at Begumpet SUH, Ram said, “We mostly come across men who have drinking problems and have estranged relations with their families. Then there are migrant workers from Kerela and West Bengal who come here in search of work but get side-tracked due to various circumstances. We give them the first preference in terms of up-skilling and rehabilitation here since they have families they have left behind to look after.”

“We have seven to eight new ‘residents’ here every month. Whenever we have a new member, we ensure all their identity cards and documents are in place, if not we help them with it. We then inform local police officials and NGOs about the same. To rehabilitate people is not just GHMCs duty, but a cross-departmental effort.” he added.

The SUH also has a separate room for men in need of medical attention. This ward can accommodate 35 men at once. After the identification of a said person, one of the three caretakers present at each facility provides them with the required medical attention. There were 24 men receiving medical aid at this facility when Siasat.com visited.

Siasat.com met with a patient who was partially paralyzed and bed-ridden when brought to the facility. After being looked after, the person can now walk by himself. “When he came in, he didn’t even speak a word, let alone move around. A physiotherapist comes every week to the facility who takes care of him. Apart from that, we also have Sunday outings to the parade ground with the community members.” said Ram.

Community building at the shelter homes:

The people who have been rehabilitated by the facility usually drop by to inspire and motivate current residents living there.

“ I don’t have the urge to drink as much anymore. My life took a positive turn here. The shelter provided me with the help I required, and I wish to pass on the same to people who are currently here,” Ramana Reddy said enthusiastically.

“There is usually a cycle here. People come in need of help and leave with a reclaimed sense of dignity. There are many external variables on the streets influencing them, all they need is to be moved out of those situations. With enough motivation and a direction provided by us here, they soon become a part of the contributing society again.” he concluded.

Upon asking why we still see a lot of people taking refuge on footpaths, and platforms, Ramana said, “This shelter is for men only, likewise, there are gender-specific shelters. Many of the people out there do not prefer this segregation as they are complete family units. They seek shelters at our facilities during extreme weather conditions usually, such as during monsoons and winters. They do not prefer being separated from their family members for longer periods of time so they go back to the streets, or back to their native places.”

Where GHMC and its homeless shelter miss out:

This reporter also spoke to a toy vendor, Dinesh, from Debari, Rajasthan who now lives with his wife, and a child, along with other such families on the footpath adjacent to Mehdipatnam garrison.

Dinesh said, “There are close to 60 of us living on this footpath here. We have come from neighbouring villages around Udaipur. This is my third visit to the city. We stay in the city for a maximum of two months and go back to our villages. We have our parents and cattle to look after. We come back again when we run out of our savings.”

When asked why they don’t stay in government-provided shelters, Dinesh was puzzled as to the very existence of such a facility.

He further said, “the corporation (GHMC) asks us to vacate this footpath. They either take away our carts or ask us to go back to our villages. They trouble us a lot. When it rains, we simply find a shelter to stand underneath it, what else is there to do?”

Dinesh maintained his disbelief when informed that the GHMC aids people living on the streets.

With the onset of monsoon season, the city traffic police are gearing up to identify more homeless people hotspots and make necessary arrangements.