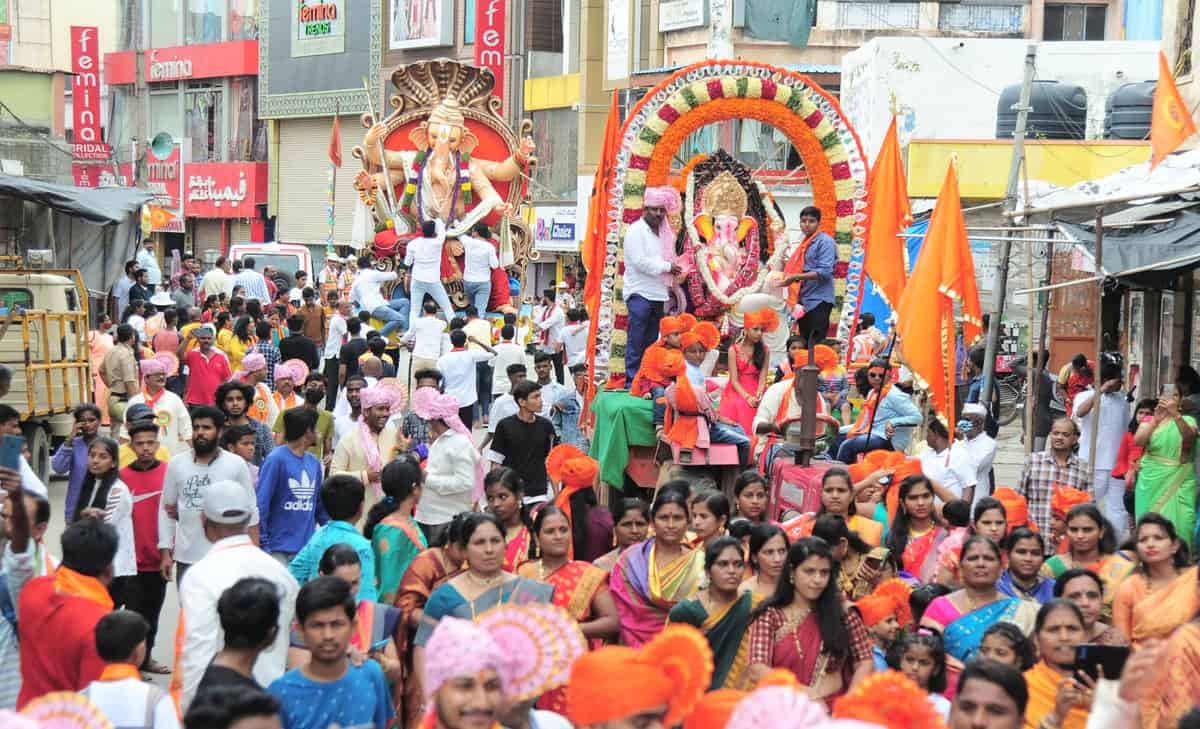 Hyderabad: On the account of Ganesh idol immersion, the Government of Telangana declared a general holiday for Government offices, schools, and colleges in and around the twin cities of Hyderabad and Secunderabad, Rangareddy and Medchal districts on September 9, 2022, i.e., on Friday.

To compensate for the holiday, September 12, which is the second Saturday will be considered a working day, the government informed.

The police in the tri commissionerates of Hyderabad, Cyberabad, and Rachakonda will be on high alert for the Ganesh Visarjan (immersion) scheduled on Friday.

Together the tri commissionerates will deploy around 25,000 policemen for the security arrangements.

The centralized procession will be taken out from the Balapur in the southern end of the city and will pass through Chandrayangutta, Falaknuma, Aliabad, Nagulchinta, Shahalibanda, Charminar, Pathergatti, Nayapul, Osman Shahi Road, M J Market, Abids, Gunfoundary, Liberty and end at immersion point at Hussainsagar or Necklace road.

Around 30,000 idols are to be immersed in the Hussainsagar lake during the 10 day festival. The GHMC and local municipal bodies made arrangements at 31 other small ponds and lakes. Artificial ponds are arranged for the convenience of immersion of idols.

The police are taking extra safety measures in the south and west zones of Hyderabad in view of Friday prayers and recent detention of Goshamahal legislator T Raja Singh for allegedly making derogatory comments against Prophet Mohammed and inciting communal flare up in the city.

Senior police officials will be present in the old city till the culmination of the Friday prayers where large gatherings are seen at mosques. The community elders appealed to the Muslims to attend the Friday namaz near the houses and not to come to mosques on the procession routes unless unavoidable.

The police are keeping a close watch on the activities of saffron linked Ganesh mandap organizers in Dhoolpet, Begum Bazaar, Mangalhat, Muqtar Gunj, Gowliguda, Jummerat Bazaar, Shahinayathgunj and Goshamahal. Police suspect some supporters of Goshamahal MLA T Raja Singh might use the mammoth procession to show their dissent over the detention of the MLA.

The procession will be monitored using the closed circuit cameras at the command and control center, the DGP office and the local police stations.

In Telangana the senior officials of DG rank held a meeting with the SPs/ Commissioner’s in the districts/ cities. Source said, a high alert is unofficially declared in erstwhile Adilabad, Karimnagar, Nizamabad, Mahabubnagar and Vikarabad districts. The Rapid Action Force is deployed in Bhainsa and Adilabad.