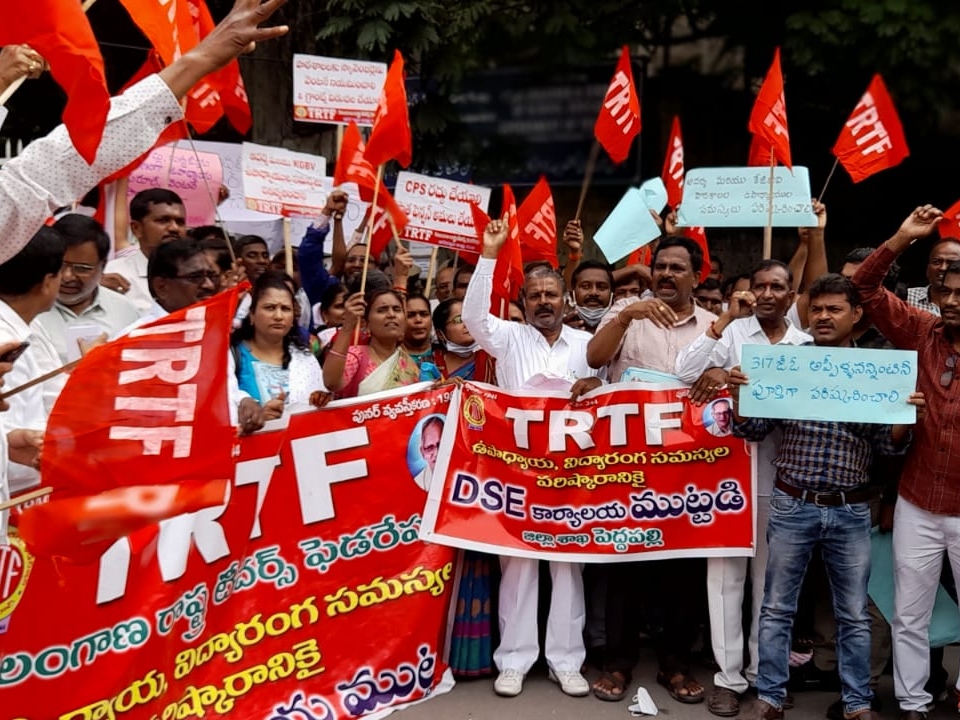 Hyderabad: Members of the Telangana Rashtra Teachers’ Federation (TRTF) on Wednesday protested outside the Directorate of Secondary Education (DSE), seeking solutions to the many problems of the state’s teachers. They demanded pensions, salaries, promotions and an easing of workload.

The federation, in a press release, said that the government was unresponsive to the teachers’ demands despite many representations. They brought up that Government order (GO) 317 was introduced without consulting teachers or labour unions.

“The families of teachers who were peacefully in the same district were divided by wife’s district, husband’s district, own hometown’s district, and so on. Medical grounds and widow category have not been considered,” said the TRTF.

Teachers working in Kasturba Gandhi Balika Vidyalayas (KGBV) are not even getting minimum casual leave and regular salary. Along with their salaries, pensions are nowhere to be seen, said the teachers. “Since 2001 there are no promotions for teachers to Junior lecturer positions. Since 2005, MEO DYEO has not provided promotions. Since 2015, there have been no promotions of school assistants and high school principals,” they added.

In AP teachers are promoted every month and transferred every year. Why this is not possible in Telangana?, they asked.

They also brought up issues like textbooks not being issued on time, and how SCERT and DIET colleges run on teachers performing many roles additionally with their own. They said, “The supervision of primary schools in the state is lacking and the education sector has been reduced to a pathetic state.”

The number of students in government schools has increased this year due to the pandemic. Under the Mana Ooru-Mana Badi scheme announced by the state government this year, English medium has ben brought in from 1st to 8th class.

“It would have been better if TRT had announced for the appointment of regular teachers according to the number of students. Even after a month since the start of the academic year, education volunteers and art & craft teachers have not been appointed,” stated the TRTF.

“For a long time, the government has promised inter-district transfers. 21 GO made it mandatory for one of the mutual transfers to be transferred within 317 GO. Why the above rule when the former district does not give seniority? Due to this absurd provision, many teachers are not eligible for transfer,” they complained.