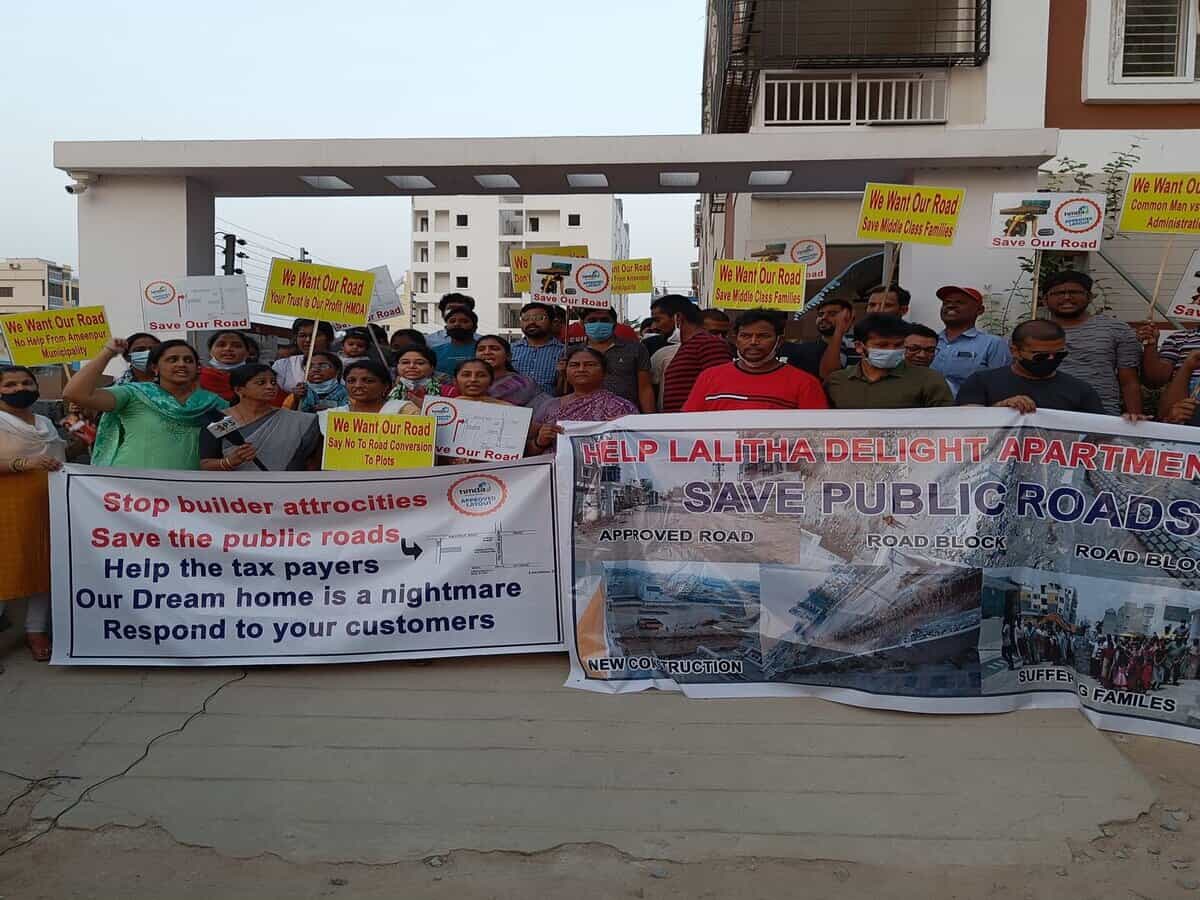 Hyderabad: A conflict between locals and a powerful builder is intensifying every passing day at Ameenpur, Patancheru constituency where a road approved by the Hyderabad Metropolitan Development Authority (HMDA) under use by locals was blocked by the builder for the sake of constructing a residential apartment in the road area.

Kaila Narasimha, the owner of Lalitha Constructions, is at loggerheads with flat owners of ‘Lalitha Delight’ (a two-block apartment complex constructed and sold by Mr Narasimha) and locals over the contentious road issue.

Flat owners allege that the builder, during conversations about the sale of flats, had promised them a thirty feet road as part of an HMDA-approved layout that connects Beeramguda and Ameenpur village but later bailed out on the promise. He now claims ownership over the road by not only building a wall to block the passage but also is currently funding construction activity on the site, locals say.

Speaking to Siasat.com, they also alleged veiled support of local politicians, Ameenpur municipality officials, and bureaucracy to the builder which is empowering him to continue work on that site despite public resistance. Locals also raised a Twitter campaign tagging ministers and municipality officials in an attempt to get their attention.

MA&UD Minister KT Rama Rao on May 8, responded to a local’s tweet on the issue and asked the HMDA to look into the matter. But even after that, nothing much has happened other than token visits from officials, said Srinivas, the President of Lalitha Delight Residents Association.

Flat owners have also made several visits to offices including the Ameenpur municipality, HMDA, and office of the District Collector. They also met with finance minister T Harish Rao who promised help in solving the issue. But locals say that the HMDA did nothing and the pace of construction has increased.

Also, locals have submitted representations to Patencheru MLA Mahipal Reddy, Ameenpur municipality, the Police, Sangareddy district collector, the HMDA, and the MA&UD on the subject. “We have invested lakhs of rupees in these apartments trusting the builder’s promise of a road (HMDA approved) that would make commute simpler for us,” Srinivas said.

“Without the road, our community is at a great loss. The road blockage will affect 600-1000 citizens making their lives tough every time they step out. Due to the regular tussle with the builder on the issue, health problems, especially of the mind, are on the rise. We hope the authorities stand on the right side of the matter and solve this crisis,” he added.

Siasat.com contacted the builder to get his side of the story and he promised to get back to us with paperwork and details. The report will be updated after further correspondence.