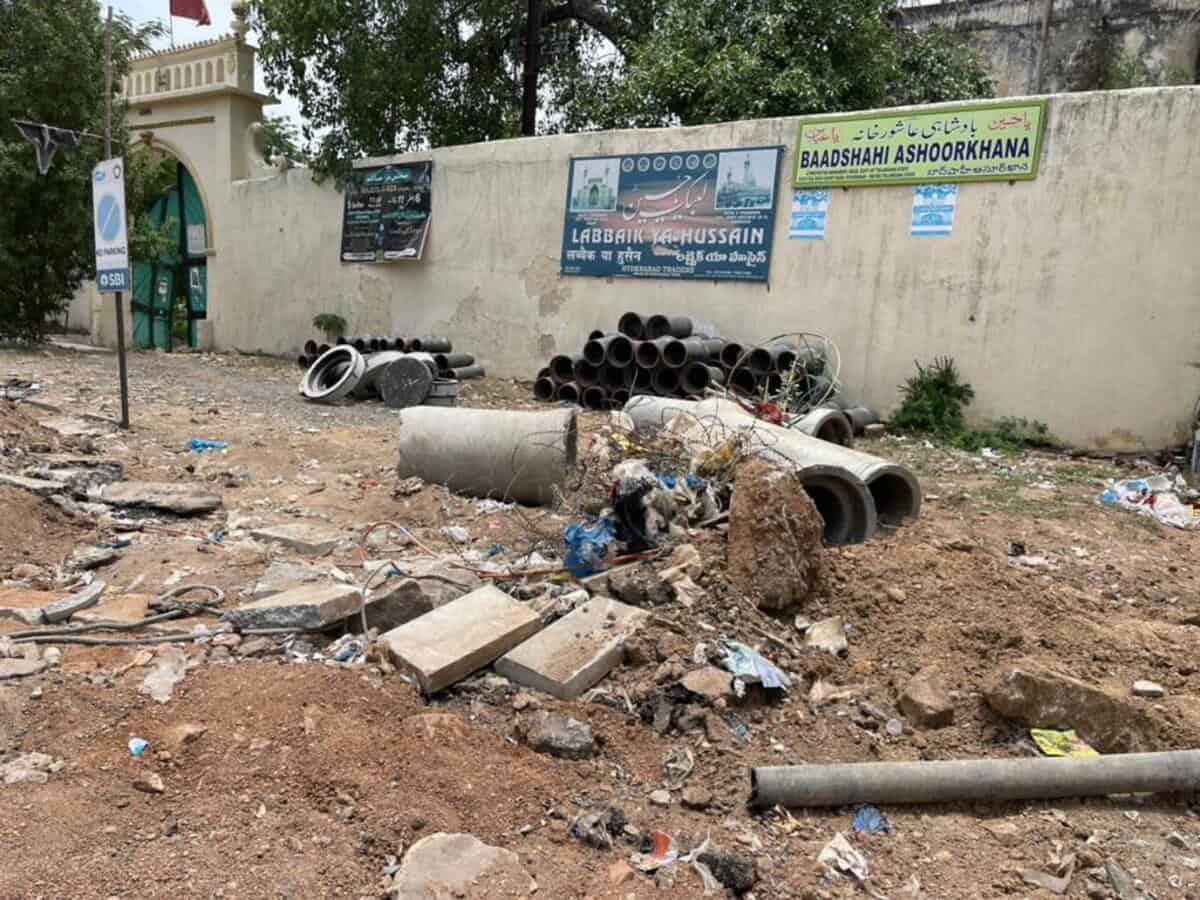 Hyderabad: The caretakers of the Badshahi Ashurkhana on Monday approached various government authorities stating that former encroachers of the place are trying to erect a religious (Islamic) flag of a different sect, after the historical structure’s boundary wall was taken down by the water board under the pretext of taking up sewer works.

On Monday, officials of the Hyderabad Metropolitan Water Supply and Sewerage Board (HMWSSB) took down the boundary wall of the 429-year-old monument stating it had to be done to undertake sewerage works in the area. However, the Badshahi Ashurkhana’s caretakers have alleged that the boundary wall and the monument are in fact subject matter to a court ruling, which has reportedly been flouted.

Mir Abbas Ali Moosavi, the Mutawalli Mujawer (caretaker), in a letter to Telangana chief secretary Somesh Kumar, commissioner of Police CV Anand, Hyderabad district collector and other departments, said that the boundary wall of the Badshahi Ashurkhana is not erected again, there is a possibility that the outer area of the monument may be encroached by the ”politically influenced encroachers”.

If the wall is not rebuilt, then it may lead to disturbances within the Muslim community, said Mr. Moosavi. In his letter to the authorities, he added that former encroachers are reportedly intending to erect a flag of a different sect to create communal/sectarian disturbances among Muslims in Hyderabad.

When contacted, the deputy general manager of the HMWSSB who in incharge of the Old City did not respond for a comment on the issue.

The Ashurkhana is a protected heritage site, and is the second oldest monument of Hyderabad, as it was built immediately after the Charminar, which was constructed as the city’s foundation in 1591 by Mohd Quli Qutb Shah of the Golconda or Qutb Shahi dynasty (1518-1687).

What is the Badshahi Ashurkhana?

An Ashurkhana is where Shia Muslims mourn during Ashura, the 10th of Moharram. The place is dedicated to Imam Hussain, a grandson of prophet Muhammad who was killed in the battle of Karbala. Hussain was the son of Imam Ali, the prophets son-in-law (and cousin).