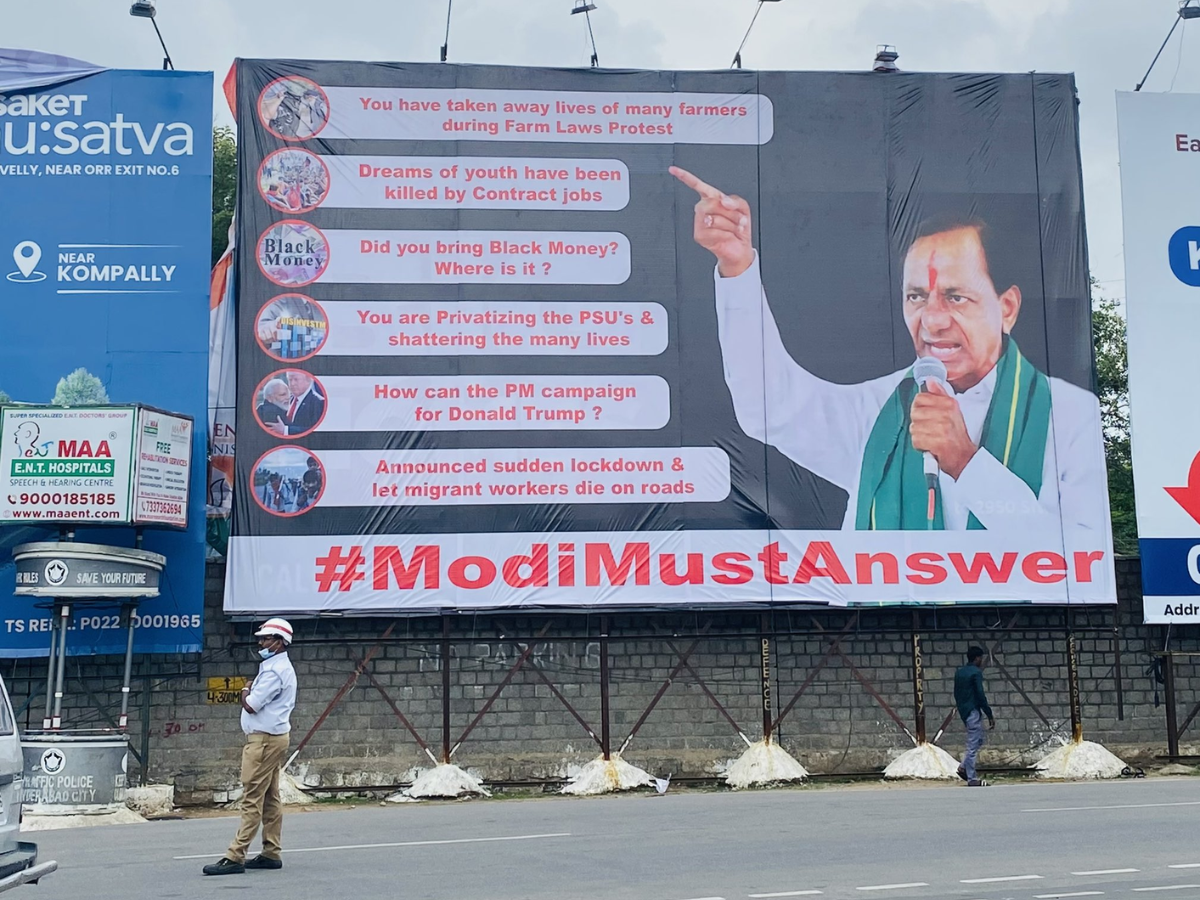 Hyderabad: The Bharatiya Janata Party’s most important event undoubtedly is its national executive meeting. And right from the moment it was announced to be held in the capital of Telangana, the political atmosphere changed. Many wondered if Hyderabad would have to bear a heavy cost in terms of polarisation.

This was to be expected, as, over the last eight years, each time Prime Minister Narendra Modi visited Hyderabad, the BJP would run a media and publicity blitzkrieg, giving the milieu a saffron hue. The city did turn saffron for days in the run up to the national executive meeting (held on July 2 and 3) with BJP flags and hoardings of Modi hanging on almost every major road.

However, this time around, something unexpected happened: the BJP was upstaged by a crafty TRS and its social media team. On July 2, the first day of the BJP’s national executive meeting, Modi landed at the Begumpet airport in the morning.

On the same day, the opposition’s candidate for the upcoming presidential election, Yashwant Sinha, reached Hyderabad as well. KCR received him, instead of Modi, which BJP leaders found fault with and said should have been done.

Moreover, without any inkling, ruling TRS workers put up their party flags and banners of KCR and Sinha everywhere starting from the morning of July 2 itself. Everyone amongst the public who was complaining that the city turned ’saffron’, suddenly found Hyderabad dyed in pink. All across, pink flags were put up beside, over and around the BJP’s flags.

On the same day in the afternoon, KCR then held a public meeting and attacked the Prime Minister. Sinha also delivered his speech. That coupled with the ‘money heist’ hoardings and protests organised silently by TRS leaders also diverted attention of many on social media away from the BJP’s national executive, which was in the spotlight.

So day one ended with the TRS stealing the show on social media, and the city seeing a kind of tug-of-war between pink and saffron. BJP leaders from the state said that whatever happened, was ”cheap”.

”There was no reason for KCR to make it so cheap. His days of fence sitting are gone. When you smell blood, it doesn’t matter if it is TRS or Congress. Our workers sense that we have a chance as we are are also in the game. See KTR also, he has become a troll. He is supposed to be the shadow CM,” said a BJP leader from the state, on the happenings of what transpired in Hyderabad over the weekend.

“We set a narrative, and they did not expect this kind of thing. Our party managed to create a buzz on social media. The BJP could not even react properly. Usually when its national leaders visit Hyderabad or Telangana, any statement they make gets hyped up. This time, we countered them well,” said a TRS functionary, who did not want to be quoted.

For both the days that the BJP had its meeting here, the TRS managed to draw attention to its ‘money heist’ protests, mocking Modi. This was a marked difference in terms of perception, given that the BJP with its well-oiled machinery usually sets the narrative.

In the run-up to the 2020 Greater Hyderabad Municipal Corporation (GHMC) polls, the entire top rung of the BJP turned up in the city for campaigning. Uttar Pradesh chief minister Ajay Singh Bisht, aka Yogi Adityanath, who then said that the BJP will rename Hyderabad to Bhagyanagar if it comes to power, also made an appearance at the Bhagya Laxmi temple at the Charminar on Sunday morning.

His appearance created a flutter, but that’s all it was. The same day was Modi’s public meeting, which many expected to end with fireworks. The icing on the cake for those who enjoyed the political rivalry was when pink balloons adorned with ’Jai Jai KCR’ were flown in the air by the TRS to upstage the BJP.

Just hours ahead of PM Narendra Modi’s rally at Parade Grounds in Secunderabad on Sunday, pink balloons with the TRS slogan ‘Jai Jai KCR’ were positioned outside the venue, such that they are prominently visible from the venue of BJP’s National Executive meeting.

“Generally, the BJP creates a massive wave in terms of social media presence when Modi comes here. But on Sunday, the Prime Minister was unlike his usual self. The usual rhetoric was there, but it barely dented the TRS this time. That coupled with KCR not receiving Modi has sent a message of sorts,” said a political analyst, who did not want to be named.