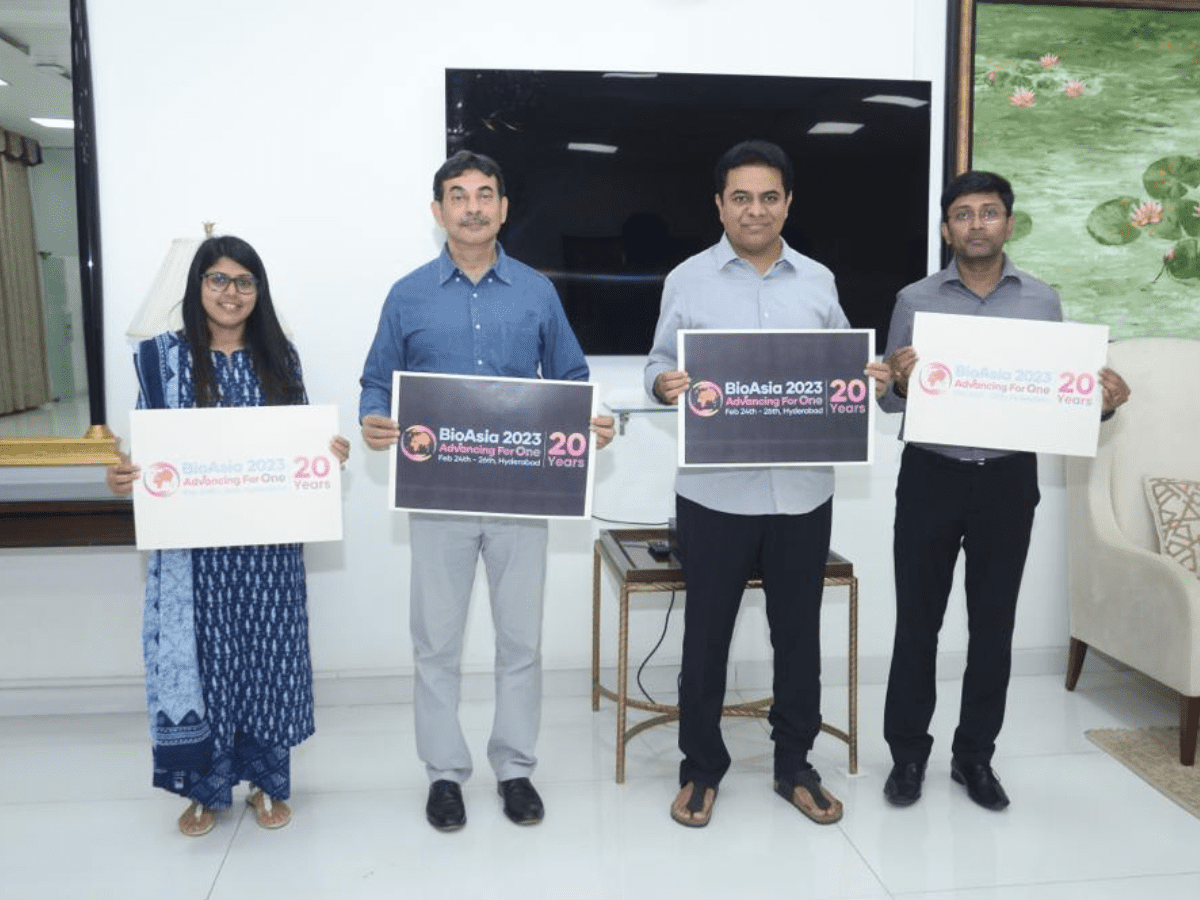 Hyderabad: The 20th edition of Bio Asia, hosted by the government of Telangana will be conducted from February 24-26, 2023. The announcement was made by the state minister of industries and commerce, KT Rama Rao.

The minister hailed Telangana as a healthcare and sciences hub for India and also for the world. He also talked about its performance during the COVID-19 pandemic as a vaccine supplier.

Bio Asia is a marquee life sciences and health tech event. The theme for this edition has been announced as “Advancing for ONE: Shaping the next generation of humanized healthcare”. The logo of the event was also unveiled by the minister.

Other than him, Jayesh Ranjan, Principal Secretary (I&C) and Shakthi Nagappan, Director, Life Sciences & CEO of BioAsia were also present at the event.

The State Minister who unveiled the theme of the event said that as the world is returning to normalcy, we are geared to host this grand event.

“I’m pleased to announce the 20th edition of BioAsia. As the world has begun to come back to normalcy, we are geared to host the next year’s grand event in person and host a galaxy of world leaders in Hyderabad. The event has truly evolved over the years as a pre-eminent global meeting for researchers, academia, industry, healthcare providers and policymakers to discuss collaborative opportunities.” the Minister said.

Jayesh Ranjan also hailed this as an extraordinary feat and that they are keen to make it a landmark event.
“It is indeed an extraordinary feat for any event around the world as only a few events can sustain for a long period of two decades. BioAsia has done remarkably not just to sustain its momentum but has grown consistently in stature over the years,” Ranjan said.

Shakthi Nagappan, the CEO of BioAsia and Director of Life Sciences in the government of Telangana was also present at the event. He talked about the theme of this event and said that it will bring the next generation of humanized healthcare.

“With the theme, Advancing for ONE: Shaping the next generation of humanized healthcare, Bio Asia 2023 will bring together life sciences and healthcare leaders, academia, start-ups, regulators and investors, on one stage to deliberate on the cross-cutting themes of One Health, disruptive technologies in health, and accessibility and affordability in healthcare for all,” said Nagappan.

BioAsia 2022 was hailed as a big success with the virtual participation of about 37,500 delegates from about 70 countries. The event has also benefitted immensely, from the participation of several imminent names such as Bill Gates (Co-founder Microsoft), Alex Gorsky (Executive Chairman, Johnson & Johnson), Vas Narasimhan (CEO, Novartis), Geoff Martha (Chairman & CEO, Medtronic) and Paul Polman, (Former CEO, Unilever), among others.