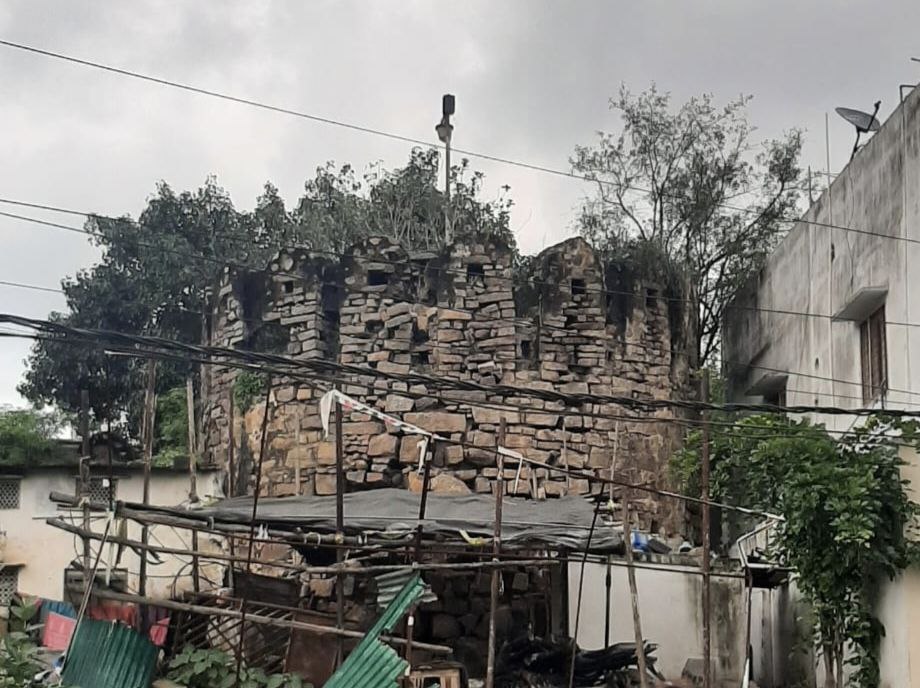 Hyderabad: An old ‘burj’ or bastion (place where cannons are placed) of the city’s former fortification wall located at Mekala Banda in Aliabad (Old City) is on the brink of collapse. With incessant rains lashin the city, the structure may get further damaged and might be irreparable.

The granite structure was once a part of a long fortification wall that ran around Hyderabad and its borders built in the early 18th century to protect the city from invasions. The weakened ‘burj’ or bastion also poses a danger to local residents of Mekala Banda. Located right opposite the Urban Primary Health Centre, big gaps can be seen in the ‘burj’ and the lime mortar mix that kept the granite stones intact has peeled, giving way to rat burrows.

“A cannon was placed atop of it for years. Some people displaced it and it is now buried under the earth and debris. It was a point for photography also at the location till 20 years ago. Now no one goes near it due to fears of the structure falling down anytime,” complained Sreenivas Yadav, a local resident.

Running on either side of the ‘burj’ are a few meters of the old fortification wall of Hyderabad. “It is around 200 meters in length and in pretty bad shape. The local people have constructed their houses with the support of the wall, hence it is somehow existing,” said Amrish, another local resident.

The city during the Nizam era (1724-1948) had a massive fortification wall which guarded Hyderabad for about a century. The impressive old wall – 18 feet high and 8 feet wide ran around six miles around the city of Hyderabad. Bastions (burj) were also built as part of it.

However, it soon became obsolete as the city expanded, and newer areas emerged. After independence, the walls and Darwazas slowly also fell to neglect. Only a handful of the walls remain today. One can hardly find it running at length, except at a few places at Aliabad, Lal Darwaza, Mir Jumla Talaab and Doodhbowli. Of the Darwazas also only a few remain, like the Dabeerpura Darwaza.

According to historians, such bastions were constructed at strategic locations as per military points of view. These were of different sizes and cannons were placed on top. Adequate cannon balls were kept nearby to use in case of any enemy attack.

Construction of the wall was a long work; it started during the rule of Abdul Hassan Tana Shah’s period of the Golconda period, the last Qutb Shah ruler. The wall was completed during the Nizam or Asaf Jahi period afterwards.  The doors were made of iron and heavy wood.

History of the city

Hyderabad was founded in 1591 by Mohd. Quli Qutb Shah, the fourth ruler of the Golconda or Qutb Shahi dynasty (1518-1687), which was established in 1518 by Sultan Quli (1518-43). The latter was originally from Hamadan province and was appointed as the governor of Tilang (Telangana) during the Bahamani era (1347-1518). Sultan Quli was given the Golconda fort as part of his governorship. The fort existed as a walled city until Hyderabad was built.

The Qutb Shahi dynasty came to an end in 1687 when Mughal emperor launched an eight-month long war with Sultan Abul Hasan Taana Shah, the seventh and last ruler of the Golconda dynasty. The latter was taken captive, and Hyderabad was destroyed by the invading Mughal armies. After that, the Mughal empire appointed different governors to look after the Deccan areas (which included Tamil Nadu areas and the Mysore state).

The first Nizam Kamruddin Khan, whose father and grandfather were part of Aurangzeb’s armies that destroyed Hyderabad in 1687, decided to come and take over the governorship of the Deccan in 1724. After killing the existing governor Mubariz Khan, he took over the position, ruling as governor from Aurangabad until his death in 1748. Nizam Ali Khan, the second ruler, shifted his capital to Hyderabad in the 1760s.