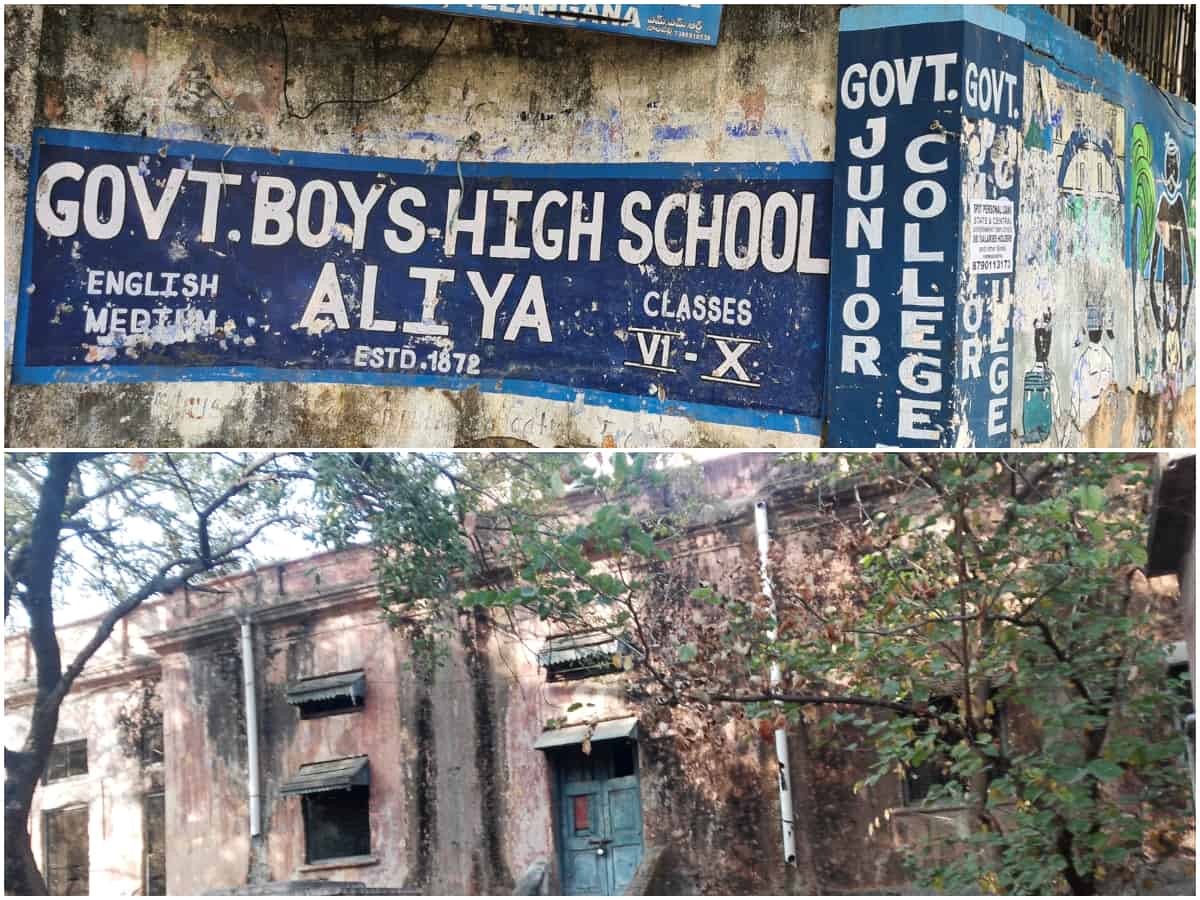 Hyderabad:  The historically significant Madrasa-I-Aliya, which is almost 150 years old, bears silent testimony to the state government’s apathy towards the city’s heritage. The beautiful structure was supposedly one of Hyderabad’s best schools is now left to its fate.

Madrasa-I-Aliya was founded by Mir Turab Ali Khan (Salar Jung 1, who was the prime minister between the fourth and sixth Nizams of Hyderabad) in 1872. The school for royals boasts of alumni like the seventh Nizam Mir Osman Ali Khan and his grandson Mukkaram Jah.

It was managed by the Anglo-Indians, but after Operation Polo in September 1948,  the school management was brought under the control of the state government which led to its downfall.

Now called the Aliya High School for Boys, it was originally built of granite stones, slabs and finely carved pillars. Lack of repair and timely restoration has now led to cracks in the structure with stone chunks falling off and vegetation growing inside the walls.

Apart from the obvious unsightliness, several parts of the structure have also broken down, despite which authorities remain negligent. The major part of the school premises is now unfit for students to run classes, said teachers, who did not want to be quoted.

Currently, a portion of the ground floor in the building is being used as the administration section of the school while classes are run in small tin sheds around the main building.

This century-and-a-half old structure which once had students from royal families studying there now only caters to the underprivileged. While democratizing education is a good idea, the current situation of the Aliya Boys High School is a blot on the city’s heritage.

“Back then, studying in Aliya was like studying in an international school now. The structure itself would speak about its standards and royalty. It is painful to see the depleted structure of our school, where we had not just received education but also attained a character. The government has bought down its charm and beauty,” said Mohd. Arbaaz, who studied there from 1960 to 1968.

“This was not just an institution but a world of its own, where students were not just imparted with education; it imparted its students with Hyderabadi tehzeeb and salikha. We kept visiting the school every time we meet. We even requested the GHMC and archaeological department about its maintenance and we were shocked to note that it is no more a part of the city’s heritage structures,” said Captain Ikram Kaleem, alumni of the school from the 1944 batch.

In 1981, the erstwhile Andhra Pradesh government listed Madras- E-Aliya and Mahboobia Girls high school in the 150 heritage structures under Regulation 13 of the HMDA Act, which was meant for regulating and conserving heritage structures. When siasat.com tried to approach the HMDA officials for a statement, they were out of reach.

The building had gone some repair with the available funds, reported Deccan Chronicle in 2016.

Heritage activists believe that the building’s base is very strong and if desired, this structure of historical importance can be protected and in fact, made functional again.

According to students from the 2019 batch, the school doesn’t teach Urdu anymore. “Back then this school was known for imparting Urdu, among other languages. However, as the demand reduced, the school and also the college has removed Urdu as a subject,” said a teacher from the school who refused to be quoted.