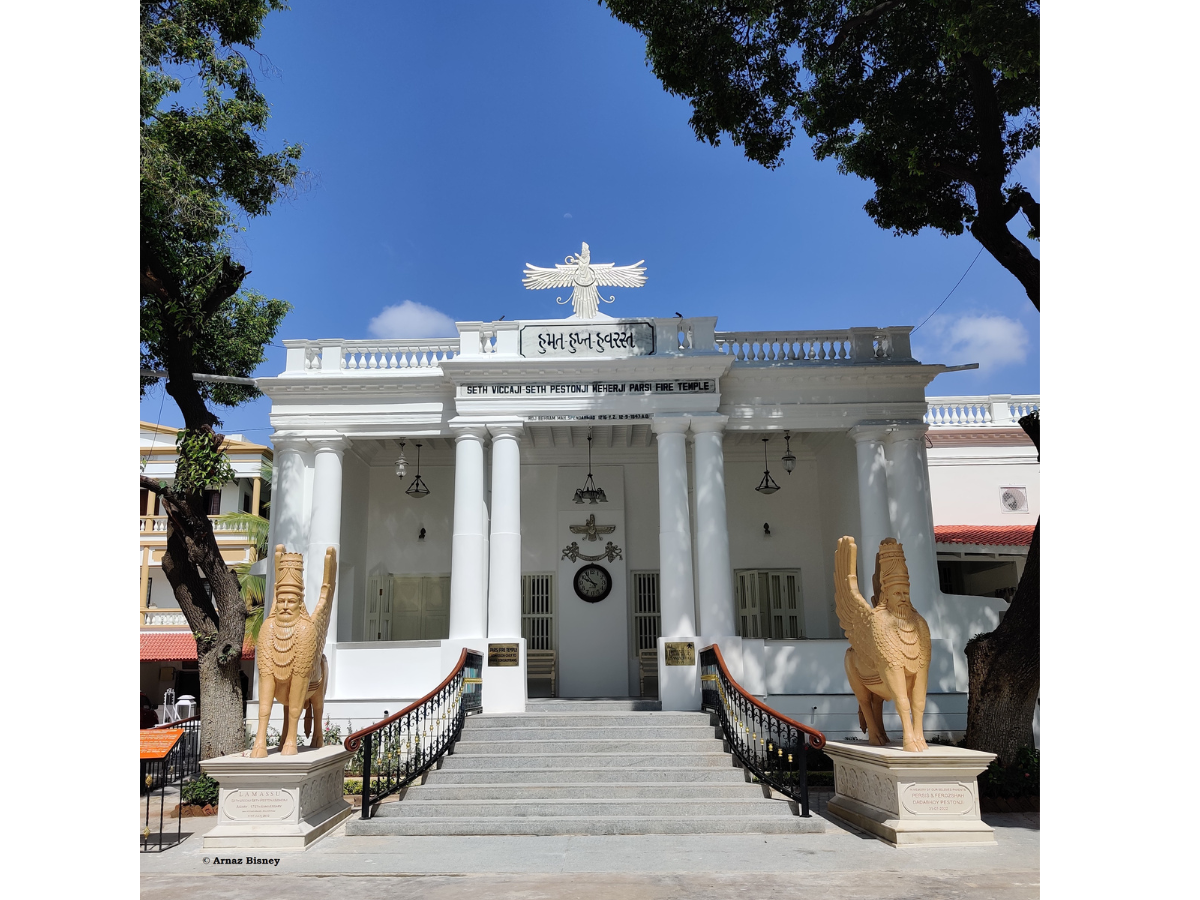 Hyderabad: The Seth Viccaji – Seth Pestonji Meherji Parsi fire temple, the oldest in South India, located at Mahatma Gandhi Road in Secunderabad, will turn 175 years old at the end of July. The Parsi (Zoroastrian) community in Hyderabad will mark the milestone with an anniversary event here.

Other historically important structures on MG are the James Street police station (1900) and the Seth Ramgopal’s ancestral home.

The Seth Pestonji Meherji Parsi fire temple was built by two Parsi brothers named Seth Viccaji Meherji and Seth Pestonji Meherji. Hailing from Tarapore village (Maharashtra), they came to the erstwhile princely Hyderabad state, ruled by the Nizams (1724-1948). They eventually and settled in Secunderabad, which was founded as British cantonment in 1806 for the East India Company’s troops.

The two Parsi brothers became renowned merchants and philanthropists among the community in Hyderabad. They first built a smaller fire temple (Dadgah) for the use of local Zoroastrians residing in the area. Six years later they built a splendid Agiary, or the the Seth Viccaji – Seth Pestonji Meherji Parsi Fire Temple. It is the oldest in South India, located at 128 Mahatma Gandhi Road in Hyderabad.

How it was built

The bungalow of Col. Haffkine, adjacent to the fire temple, and the land around it were purchased by the Meherji brothers and given in charity for the maintenance of the Seth Viccaji Meherji and Seth Pestonji Meherji fire temple. The Atash Adaran (holy fire) was enthroned and consecrated on 12th September 1847, (Roj Behram, Mah Aspandad, 1216 YZ).

Marble plaques placed inside contain Persian couplets by Khan Bahadur Dastur Nosherwanji Jamshedji Jamaspasa and Rai Girdhari Prasad. It tells us the day and date of this fire temple.

According to the Parsi community in Hyderabad, which stands at close to 1000 members today, the two brothers had humble beginnings. They eventually went on to become the sole farmers of large provinces such as the Northern and Southern Konkan, Poona, Sholapur, Ahmednagar and part of Khandesh (erstwhile state). Despite all the odds they encountered, they imported Berar (former province of Hyderabad state, now in Maharashtra) cotton to Bombay by bullock carts as an experiment.

The Meherji brothers constructed cart roads, and built bridges for the speedy and safe transport of merchandise. According to the Parsi community, they are considered pioneers of the cotton trade between the Nizam’s Dominion and the Bombay Presidency run by the British. In 1830, Maharaja Chandulal, the then Prime Minister of Hyderabad, specially invited them to open banking firms in Hyderabad state.

Within two years, the firm of ‘Pestonji Viccaji’ became the principal banking house in Hyderabad. They loaned money to the government for state purposes including the expenditure on military forces. To liquidate the advances made by the firm of Pestonji Viccaji, the Nizam entered into an arrangement whereby the revenue of the Berars and Aurangabad were mortgaged to them.

Such was the height of their prosperity and influence that they were allowed to retain in their service a small armed force and the Mint at Aurangabad was also entrusted to them. They were even permitted to have their own initials and marks engraved on the national coins. A silver coin was struck at the Aurangabad Mint, bearing the initial letters of Viccaji’s younger brother, Pestonji Meherji, and was widely known to be named after him as the Pestonshahi Sicca of the Nizam Government.

The Pestonshahi Sicca was unique in the sense that the two Parsi brothers had the right to strike their own coins. It had been a highly valued privilege under the Nizams.

The coins carried the Nizam’s initials, i.e. the Persian alphabet Noon (N) for Nasir-ud-Daula. Later, the coins had the initials of the Meherji brothers. No other family was ever permitted by the state to have its own initials or marks engraved on national coins. Pestonji Meherji introduced the popular mark, ‘resplendent sun’, on the coins he minted.

The location of this mark on the coin as well as the number of rays of the sun varied from coin to coin and there was no formula behind it. Back in the times, coin minting was a crude manual method where a coin blank was hammered against a die to put an impression on the coin. Machine minting started only in the reign of the sixth Nizam Mahbub Ali Pasha (1869-1911).

Over a crore of the Pestonshahi Siccas in various denominations of both silver and copper were struck at the mint in Aurangabad between 1832 and 1842. They were legal tender until the beginning of the 20th century. Only a few original coins remain now and are highly valued. Four of them are on display in the British Museum in London.

The Seth Viccaji – Seth Pestonji Meherji Parsi Fire Temple will celebrate its 175th anniversary with an event on July 31st.

Hyderabad has three fire temples in total. The third one is the Bai Maneckji Nusserwanji Chenoy Dar-e-Meher (built in 1904) , located at Tilak Road, Abids. The Agiary at Abids, it is said, was built to serve Parsis living in that side of the city, due to lack of transport, it is said.

July 14, 2020 marked the centenary as per the Zoroastrian Shahenshai calendar for the Khan Bahadur Edulji Sohrabji Chenoy Anjuman Dar-e-Meher in Secunderabad. It was built by Seth Jamshedji Edulji Chenoy and his brothers in memory of their late father Khan Bahadur Edulji Sohrabji Chenoy, during the reign of Osman Ali Khan, the last and seventh Nizam of the erstwhile Hyderabad State.

Though numerically totaling only around 1000 only today (430 families), Parsis or the Iranian Zoroastrian community in Hyderabad have immensely contributed to the city’s development, right from the Asaf Jahi (or Nizam; 1724-1948) era. Their arrival in Hyderabad dates back to 1803 (when the third Nizam, Sikdander Jah, became monarch), according to the community.

One of the prominent families of the twin cities is the Chenoy family. In 1803, Sohrabji Pestonjee Chenoy, son of Pestonjee Maneckjee Chenoy, along with 14 other Parsi gentlemen, arrived in Hyderabad from Jalna, and settled here. The Chenoy family came to the city when the Hyderabad Contingency (army) was transferred from the old cantonment of Jalna to Bolarum in Secunderabad.

The community also had many other noted personalities. Among them is PB Chenoy, who was in fact the first Indian Mint Master under British India (during Osman Ali Khan’s time).

Parsis originally migrated to India from Iran (Persia) over 1200 years ago, owing to the Arab conquest. They settled in Gujarat (Sanjan) first and later spread to other parts of the country. According to Ervad Mehernosh H. Bharucha, head Priest of the Bai Maneckji Nusserwanji Chenoy Dar-e-Meher at Abids, the primary belief in Zoroastrianism is that everything begins and ends with Ahura Mazda.

This is the law of Asha, the same as Rita in Sanskrit. The law of Asha means absolute, perfect, unchangeable and uncompromising righteousness. It is the first and foremost law of creation. Asha, according to him, can be summed up in three words, ‘Humata’, ‘Hukta’ and ‘Hvarshta’, meaning ‘Good thoughts, good words and good deeds’.

A fire temple is a place of worship where Parsis veneration to the supreme creator Ahura Mazda and fire is the living symbol of Ahura Mazda on earth. It is therefore worshipped.