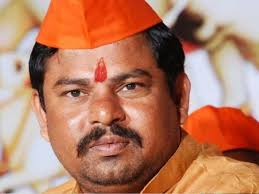 Hyderabad: The South Zone police on early Tuesday morning registered an FIR against Goshamahal BJP legislator T Raja Singh for his alleged blasphemous remarks against Prophet Muhammad. It came after scores of people took to the streets demanding action against him. Following that, the police have an fIR under various sections of IPC for hate mongering.

Raja Singh in a video released late last night made derogatory comments about Prophet Muhammad, which he said was “comedy”. Multiple complaints were filed against Raja Singh in various police stations of Hyderabad’s south zone. The police registered a case under IPC section 153A(Promoting enmity between two groups) and similar sections at the Dabeerpura police station and have taken up investigation.

Protests held against Raja Singh for derogatory remarks on the Prophet

Public in the Old City especially demanded the immediate arrest of the BJP MLA for his alleged offensive remarks against Muslims and the Prophet Muhammed. “We have registered a case at Dabeerpura police station and necessary action will be taken in this regard, I appeal the public to maintain restrain since police shall act swiftly,” said P Sai Chaitanya DCP South Zone.