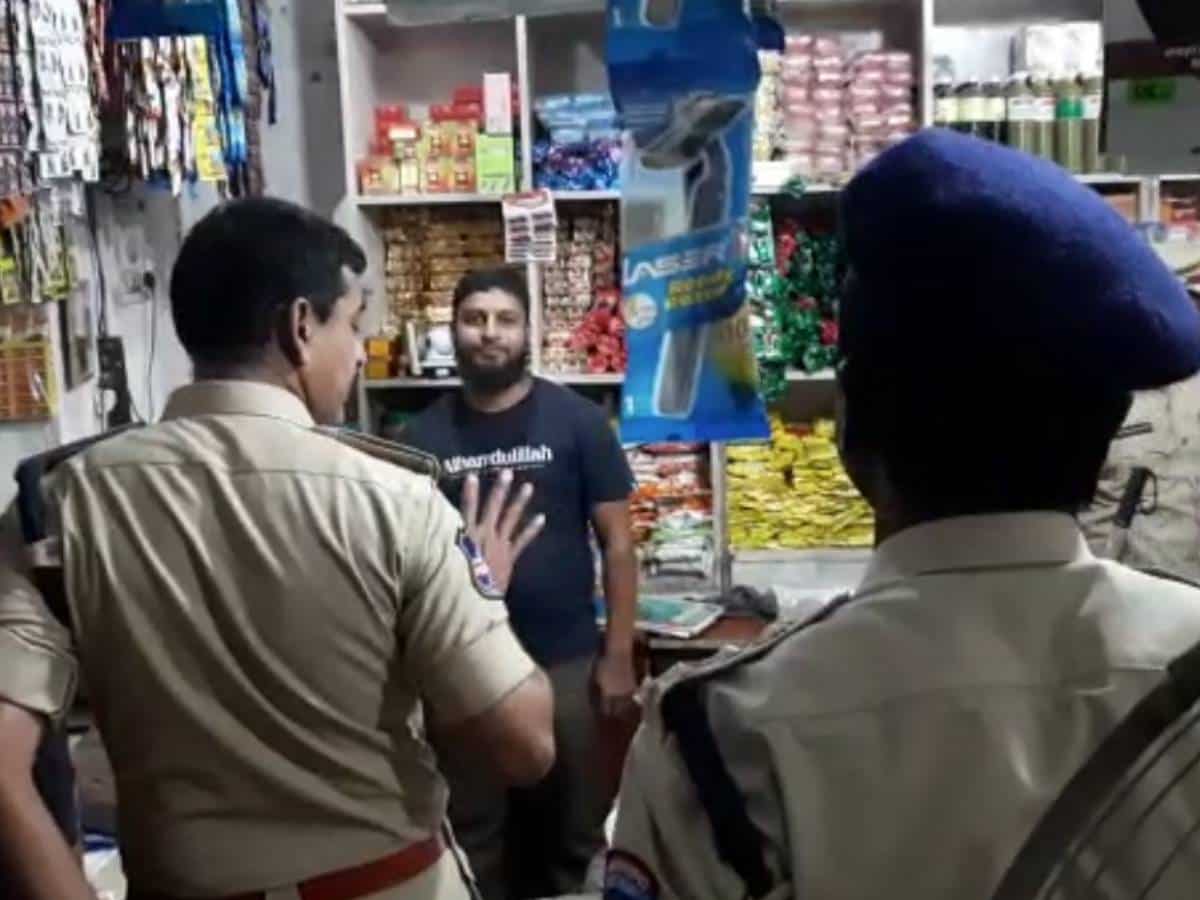 Hyderabad: Two days ago on June 14, around 7 AM, the narrow lanes of Hasan Nagar’s slums suddenly came alive, as a sea of police officials surrounded the slum dwellers suddenly. Stoking fear among many, what it was, however, was the return of the Cordon and Searches, which have seemingly begun once again.

Locals from the area stated that cops, who came in dozens at around 9 pm, were questioning people and asking shop owners if they were selling gutka or zarda (dry chewing tobacco). Around 100 police officials were present at the search.

The term ‘Cordon and Search’ is a military usage which means to cordon-off an area and search for weapons. However, the term as well as the very act of cordoning off and searching an area has now been borrowed by police officials who have normalised it.

Locals of Hasan Nagar on an edge

Speaking to this reporter, Mohammad Riyaz, the owner of a paan shop, discussed his discomfort with the arbitrary way in which the search was conducted.

“Ek do ghante ke liye aate. Kyun aare nai pata. Karobar kharab hojaata. Kamse kam bolna na, kyun aare bolke? (They come for one or two hours and we don’t know why. Business takes a hit. Shouldn’t they at least tell us what their work in our area is?)” he asked.

Muneer who owns a grocery store a few meters away from Riyaz’s shop said that cordon and searches were regular. He remarked that while he understood the hazard posed by gutka, the consumption of it wasn’t unique to his slum and the entire city was a part of it.

In a fact finding report on Cordon and Search released by a group of activists from the city on November 19, 2021, it was observed that the cases of drug consumption have been found across all classes. However, the pattern of raids were peculiar to the lower rung of the society alone.

In fact, the popular sentiment after Tuesday’s Cordon and Search in Hasan Nagar was one of fear and uncertainty. Even as Muneer argued against gutka calling it zeher (poison), he, along with other locals, found the sudden presence of 100 cops intimidating.

Necessary to clamp down on drugs, counsel repeat offenders: Police

Speaking to Siasat.com, Rajendranagar police station’s station house officer (SHO) K Kanakaiah argued that cordon and search was done as a part of the state’s clamp down on gutka and ganja. Further, the search was used to meet residents with a record of past crime.

“It is necessary to counsel repeat offenders to prevent crime. All these searches are a part of building confidence in the public,” he added.

Are Cordon and Searches legal?

As per Section 94 (Search of a place suspected to contain stolen property, forged documents. etc) of the Code of Criminal Procedure (CrPC), the police are empowered to conduct such searches.

However, Section 94 does not enable police to conduct searches by ignoring Section 165 of the CrPC. The Supreme Court invoking Sections 165 and 166 of the CrPc in State v. Rehman, AIR 1960 SC 210 stated that:

“As search is a process exceedingly arbitrary in character, stringent statutory conditions
are imposed on the exercise of the power” Provision of Section 165 CrPC is enacted to
enable police to take search when there is urgency and when it is not permissible to follow
lengthy process, securing search warrant from Magistrate. The provision is not restricted
to search of what is stolen or believed to be stolen and it permits the police officer to make
search for anything necessary for the purposes of investigation into any offence.”

Rajendranagar police station house officer K Kanakaiah stated that the police are likely to carry out more cordon and searches in the future.

An activist from Hyderabad, who did not want to be quoted, however pointed out that these types of searches almost always happen only in areas where Muslims, SCs and STs live. “Hundreds of youngsters get caught taking, selling and buying drugs. So shouldn’t the police first check homes of all those rich Banjara and Jubilee Hills people?”, he asked indignantly.