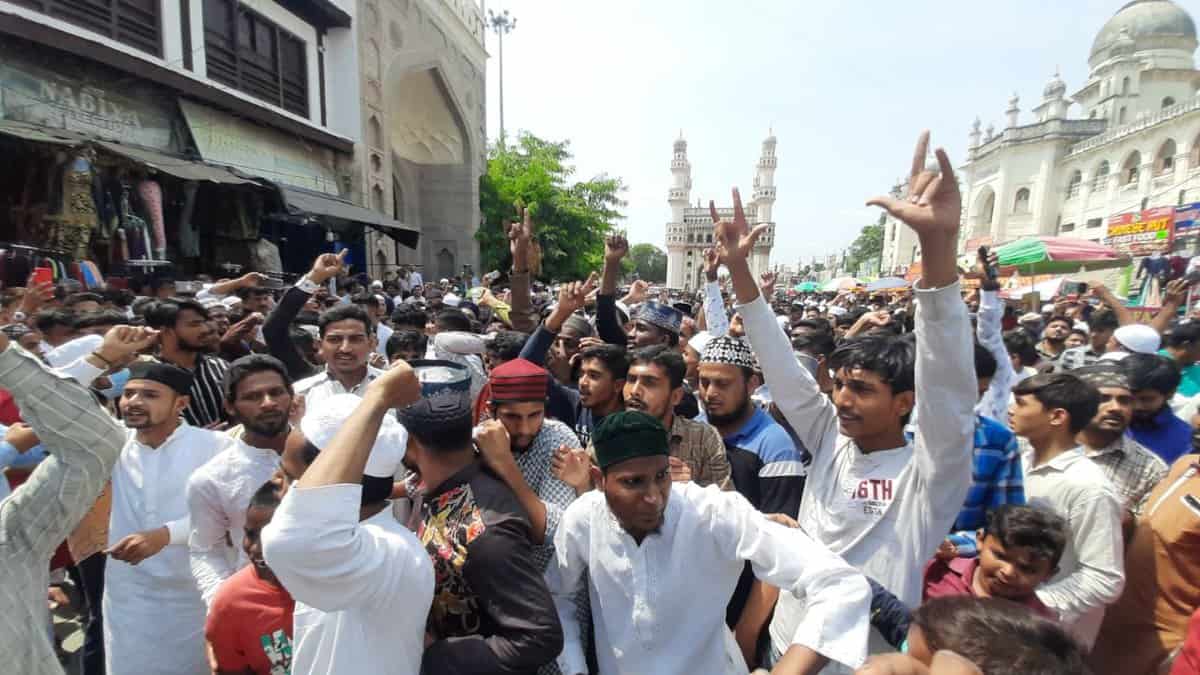 Hyderabad: A large number of protests broke out in Old City on Friday condemning the blasphemous statements against Prophet Muhammad, by the now-suspended BJP spokespersons. The areas also witnessed the presence of several police personnel.

However, tensions prevailed in Mehdipatnam after police resorted to lathi-charge the protestors who took out a rally, condemning remarks on the prophet, from Masjid E Azizia at Humayun Nagar.

The protests erupted soon after the culmination of the Friday prayers at the historic Mecca masjid as scores of Muslims gathered on the roads.

Soon after a delegation including Iran’s Foreign Minister Hossein Amir-Abdollahian made an exit from Mecca Masjid, a protest broke out outside the mosque and the protestors raised slogans against the ex-BJP spokespersons’ blasphemous comments against Prophet Muhammad.

Amid intelligence reports of proposed protests by youngsters after Friday prayers, the south zone police made elaborate arrangements and cops in plain clothes were also deputed for the bandobast inside the mosque. The Rapid Action Force (RAF) was also deployed in the area.

The protestors, as they moved towards the Moghalpura area, also demanded capital punishment for Nupur Sharma, Naveen Jindal and other RSS leaders.

They raised slogans against the blasphemous statements of the ex-BJP spokespersons and other right-wing activists.

Large crowds gathered on the roads leading to Charminar and Moghalpura with more than five hundred people participating. The police as a precautionary measure blocked roads which could create trouble.

A similar protest rally was also taken out at the Kalapathar area of the Old City. While the protests were underway in the Old City, another protest broke out at Azizia Mosque in Humayun Nagar.

Commotion prevailed at Mehdipatnam after the police resorted to lathi-charge the protestors.