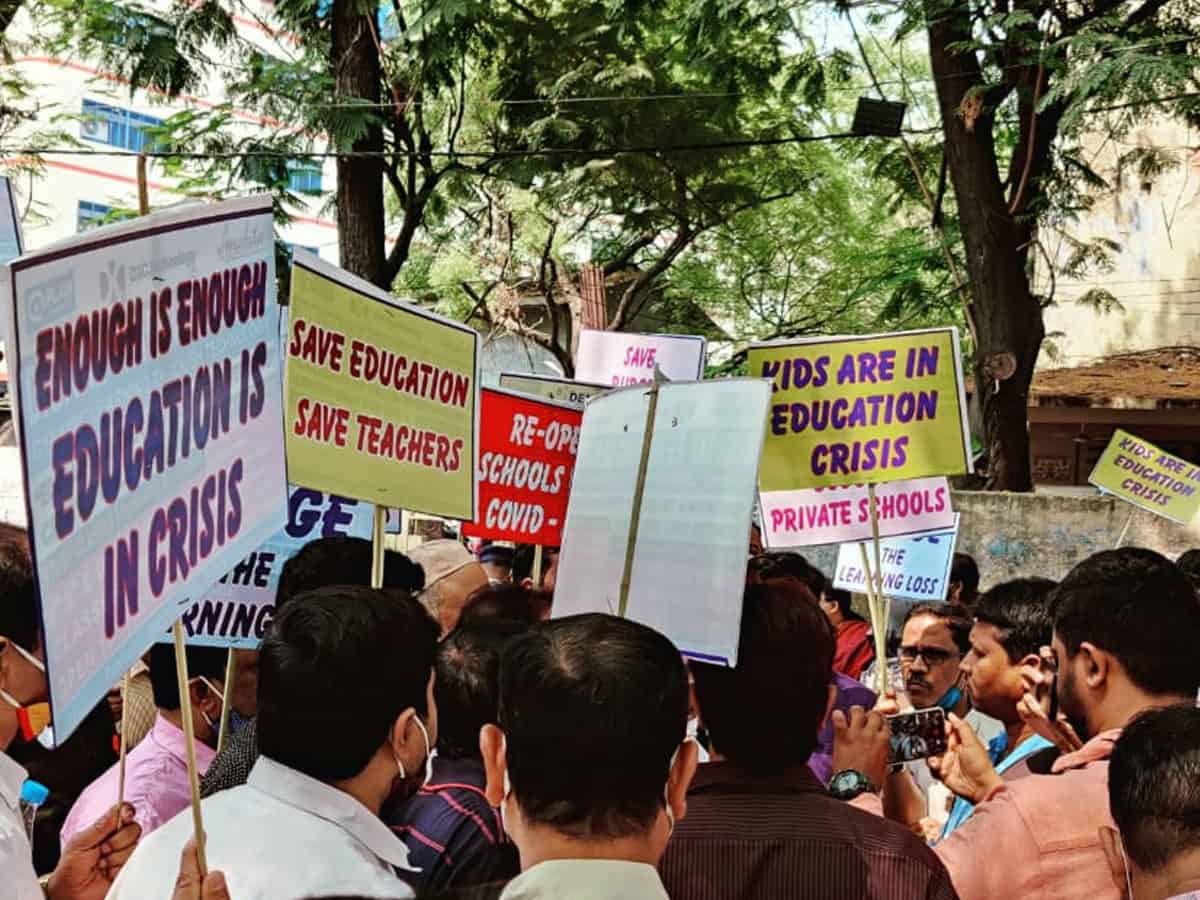 Hyderabad: School teachers and other educational associations on Saturday demanded the reopening of schools and gathered in large numbers in protest against the state government for its decision to close all educational institutions, calling it “irrational and illogical”.

The Telangana Recognised School Managements Association (TRSMA), which organised the protest, said that the decision to close schools has been taken out of “fear and rumours”, and that there is no scientific evidence to support this decision of the state government. On Saturday, its members protested outside the Hyderabad district collector’s office.

Teachers from the school further alleged that the decision has been taken out of political considerations and not out of any scientific evidence. The TRSMA has also demanded the re-opening of schools from April 1, and also for the examination schedule for classes 1 to 10 to be released.  The association also has asked the state government to grant Rs 7,000 per month to private school teachers as compensation for the months during the lockdown imposed last year.

The TRSMA further requested the government to also arrange tablets and internet connections for the students in both government and low budget private schools as well. School correspondent Ahmed Idrees said, “This step by the government has been taken based on rare exceptions of schools turning out to be COVID-19 hotspots. We have more than 10,000 schools and 30 lakh students.” He added that based on exceptions this unscientific decision of closing schools was taken.

Moreover, Ahmed Idrees said that theatres and malls are still open, and that pan shops and liquor stores are also spots for huge crowds to gather. He also pointed out that people are gathering in public without following any protocols, but schools have been shut even thought its managements were following all protocols and precautions.

Fatima Farooqui, the principal of Mount Mercy School stated that they are not against any government, but in favour of educating young minds for the “future of our great country”. She also appealed to the parents to understand the importance of education and said, “No doubt the safety of students is important, but you have to trust us with their safety. We are taking all precautions and measures to make sure they are safe.”

She further added that for the past 12 months, schools have been struggling to collect fees, pay their staff salaries, apart from incurring other expenses like rents, bills and taxes. Ms Fatima said that private teachers are now doing odd jobs to feed their families. Further, she said that more and more schools have been shutting down and that they are “being sold like furniture”.