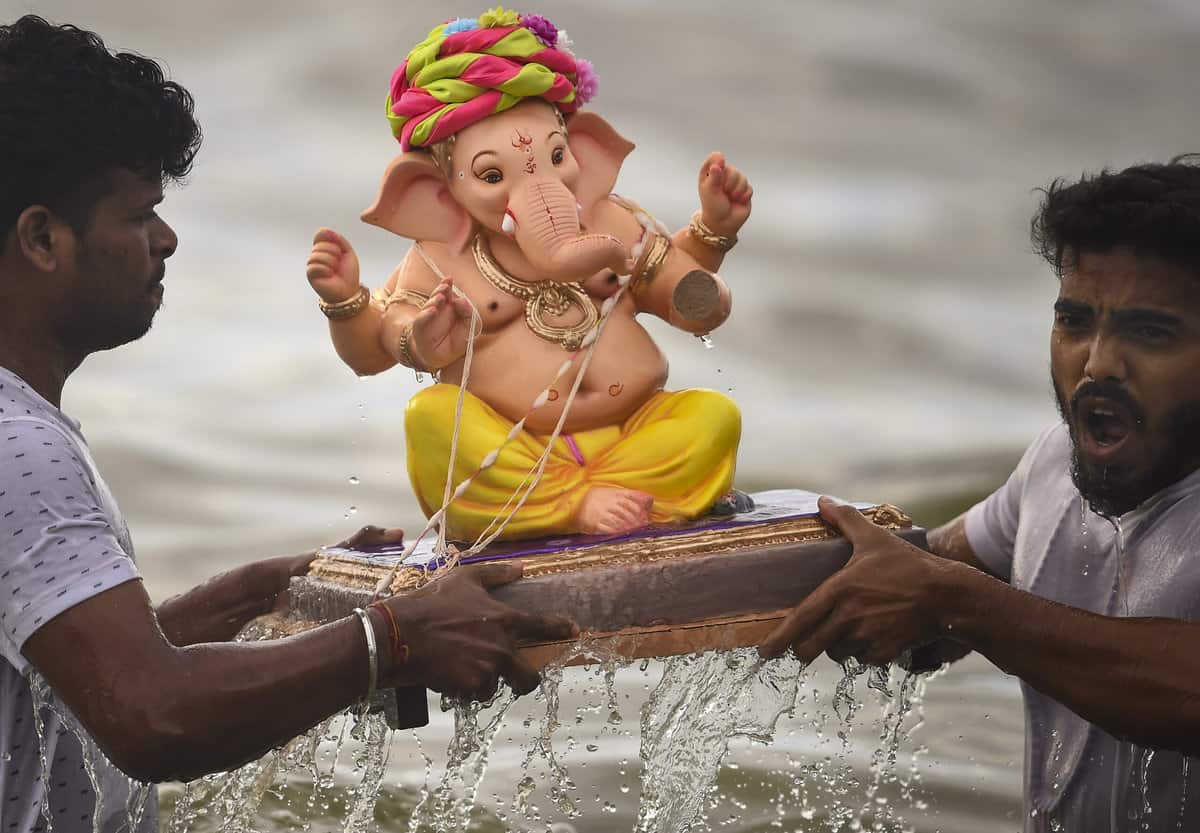 Hyderabad: Supporters of Goshamahal BJP leader Raja Singh took the Ganesh Visarjan program to highlight their demand for the release of their leader on Friday.

Youngsters including girls danced to the songs in front of the Mecca Masjid while the procession passed on the road. The Ganesh idol was well decorated with fruits. The police remained mute spectators to the song and the music.

In the evening some more vehicles were found playing the same controversial songs in Begum Bazaar and Lal Darwaza during the procession.

On some vehicles that were a part of the procession, the supporters of Raja Singh displayed his picture with the caption “We Support Raja Singh”. However, no slogans were raised in support of the MLA or demanding his release.

T Raja Singh is presently in the Central Prison Cherlapally after the PD Act is invoked against him by the Hyderabad police. He was detained soon after a controversy erupted after he made derogatory comments against Prophet Muhammed leading to protests in the city and sporadic incidents of violence.

The police in the west zone of the city are on extra alert following the detention of Raja Singh. Rapid Action Force and Quick Reactions Teams are posted in the Mangalhat, Begum Bazaar, Shahinayathgunj, Jummerat Bazaar, Dhoolpet and Tappachabutra.

The Ganesh idols from Dhoolpet and Mangalhat were immersed by the local people on Thursday night. It is a practice that has been going on in the localities for several years with the police insisting and convincing the organizers to immerse the idols in the initial hours of the day.

Where it all began

On August 11, Raja Singh threatened to stop stand-up comedian Munawar Faruqui’s show which was scheduled to be held in Hyderabad on August 20. While Faruqui was scheduled to perform in January of this year, BJP leaders alleged that the comedian had hurt the sentiments of Hindus by making jokes about Hindu gods and as such should not be allowed to perform.

On August 19, one day earlier before Munawar Faruqui’s show, Raja Singh was trying to ‘burn down the set at Shilpakala Vedika, where the comedian’s show was supposed to take place. Meanwhile, the city police took him into custody.

On August 20, on the day of the show, Raja Singh was placed under house arrest by the Hyderabad police on Friday. Amid heightened security, the Cyberabad police took into custody 20 workers of the Bhartiya Janata Party (BJP) and the Bhartiya Janata Yuva Morcha when they tried to disrupt the show of standup comedian Munawar Faruqui at Shilpakala Vedika on Saturday evening.

On 21 August, after Munawar Faruqui’s show was concluded, Raja Singh posted a Youtube video on Jai Shree Ram Channel Telangana (now made private) in which he passed several derogatory comments against Muslims and Prophet Muhammad.

At the end of the video, Raja Singh said that whatever he uttered was “comedy”.

It came after scores of people took to the streets demanding action against him. Following that, police filed an FIR under various sections of the Indian Penal Code (IPC) for hate-mongering.

Raja Singh was arrested and got bail same day

On 23 August, Raja Singh was arrested by Hyderabad Police. After a few hours of his arrest, he was released on bail by the Nampally Court due to lapses in police procedure.

Several shops in various markets of Hyderabad remained closed during the day. During protests that once again sparked up overnight, over 40 people were taken into police custody.

On August 24, after photographs of Raja Singh celebrating his release went viral on social media, protests erupted once again at several places, with protestors demanding his arrest.

Amidst the protests, BJP suspended Raja Singh from its membership for his remarks, stating that he violated party rules. He was also asked to show cause within 10 days as to why he should not be expelled from the party.

Up till Wednesday, a total of eight cases were booked against Singh at Mangalhat, Malakpet, Nampally, Dabeerpura, Chaderghat, Amberpet, Afzalgunj, and Rajendranagar police stations.

On August 25, Raja Singh was arrested once again under the Preventative Detention (PD) Act for his remarks after several protests erupted and many protesters were arrested.