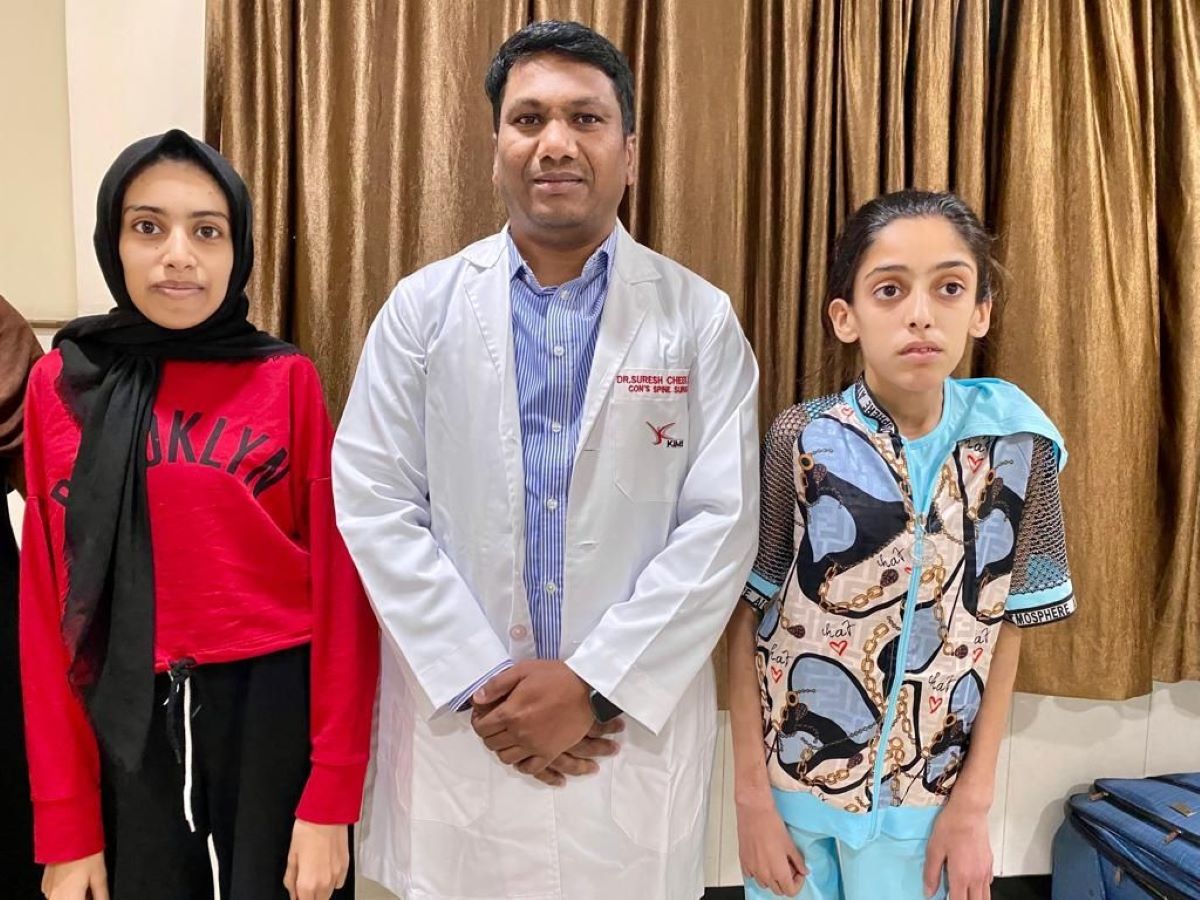 The problem for the two sisters aged 14 and 17 was very serious. There was rapidly growing spine deformity with upper body swinging away from the trunk, walking difficulty, difficulty in breathing, back pain and distorted physical appearance with significant hunch back deformity.

The parents noticed this problem shortly after the birth of the children. By then it was very small. They took the children to doctors in Baghdad for treatment. They have been evaluated with spine X-rays.

They came to know that both of them have a complex type of congenital Spinal deformity with multiple fused vertebral bones and ribs which cause pressure on the lungs and heart, which characteristically progress rapidly with the age.

The parents met several doctors and surgeons. However, surgery is associated with a higher risk of injury to the spinal cord. As a result, both the legs could be paralysed and there might be a loss of sensation in the bowel and bladder.

This panicked the parents. It is also difficult to install metal screws from the pedicles of the spine as they are very small. Therefore, the doctors there said that the surgical outcome may be very poor.

Finally, the parents brought their two daughters to KIMS Hospital, Hyderabad after they came to know about Dr Suresh Cheekatla, who has vast experience and expertise in correcting spinal deformities and the state-of-the-art medical facilities like O-arm, neuro monitoring, spinal navigation, etc.

Doctors said they presented at a stage where one of the shoulders is near hip level, big hunch at the back, and the abdomen is retracted in, with the chest pushed forward and the upper part of the body swinging to one side as they walk.

Their fused ribs and spinal bones in the back region are reducing the space available for lungs causing breathing difficulty and can shorten the life span if not treated.

Both the children underwent x-rays, whole-spine CT scans and MRI tests, and it was found that both of them had congenital dorsal kyphoscoliosis and one of them had spinal cord malformation.

Dr Suresh Cheekatla, the consultant spine surgeon at KIMS Hospital, explained that reating such a complex case of scoliosis became a big challenge for them.

“It usually takes more than 6 to 8 hours. So, we strictly followed Covid norms in all phases first. Before the surgery, we took the views of cardiologists, pulmonologists, neurophysiologists, nutritionists and physiotherapy experts. After considering the age of the children which is nearing the skeletal maturity age and also considering the poor socio-economic status of the parents, we wanted to cut down the cost of surgery. So, we have planned meticulously and decided to perform the surgery in a single phase,” he said.

“First, we passed the screws into the deformed spinal bones. We have installed a supporting rod on one side through screws. Later, we performed an osteotomy (removal of part of the bone, a method to correct the deformed bone) at the curvature (apex) where the spine is more inclined and deformed. Since the ribs also penetrated widely and are connected and fixed with the spinal column, we have also separated some of the higher ribs from the area attached to the spine by the Thoracoplasty method to facilitate the spinal correction and decrease the spinal hump. Due to the high spinal curvature and also the associated problem of the spinal cord anomaly – Syrinx in the spinal cord, it has become problematic to correct scoliosis,” he explained.

With the help of intra-operative neuro monitoring, we were able to correct the spine curvature as much as possible without putting pressure on the spinal cord and without causing any problems. After correcting the deformity we have checked for signals from the spinal cord with the help of intra-operative neuro monitoring and they are normal. The surgery was performed with the support of a team led by anaesthesiologist Dr. Naresh Kumar, the doctor said.

The government of Iraq sponsored the surgery charges to these two girls.