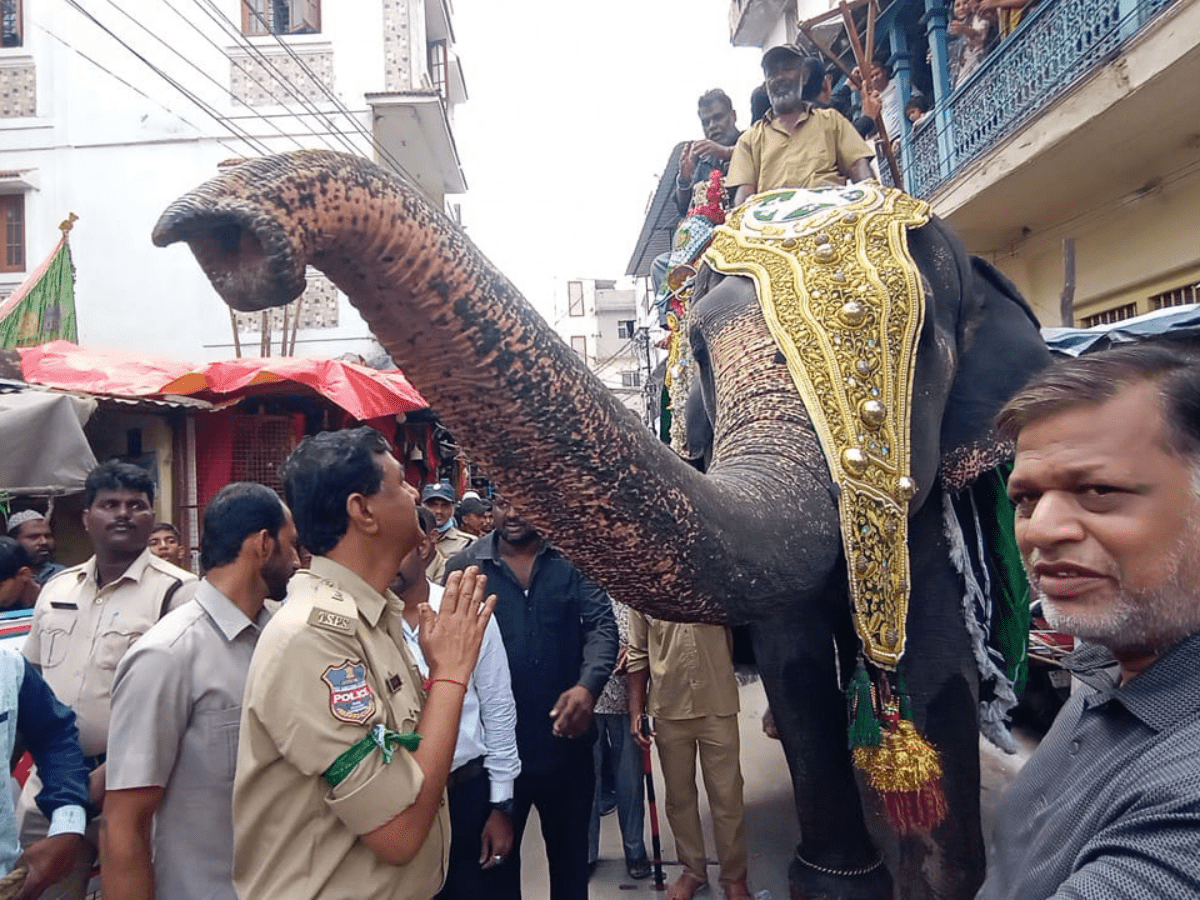 Hyderabad: A rehearsal with the elephant for the Bibi Ka Alam Muharram procession was held here on Friday. Members of the Shia Muslim community held the programme and followed the route from the Bibi ka Alawa (Ashurkhana) to Chaderghat. It is one of the largest ones among all religious processions held in Hyderabad.

The Muharram procession organiser brought the elephant Madhuri from Kolhapur for carrying the Bibi Ka Alam in Hyderabad. Last year the same pachyderm carried the historic Bibi ka Alam calmly. The trained elephant along with his mahout and caretakers arrived in Hyderabad in a truck on Thursday. The animal is currently at the Quli Qutb Shah Urban Development Authority office.

The route rehearsal is done to acclimatise the pachyderm to the activity on Ashura day when the procession is taken out. On procession day thousands of people on the road and perform matam against the backdrop of a loud rendition of ‘Nohas’.

“To ensure that the elephant does not panic to loud noise or a sea of the crowd, a rehearsal is done to test the patience of the pachyderm,” the organizers of the procession told Siasat.com.

The state government sanctioned a budget of Rs 4 lakh for the rent of the elephant and another Rs. 2 lakh for the upward and downward journey, its stay, fodder, accommodation and related expenses.

Earlier, Rajini, an elephant owned by The HEH Nizam Trust and kept at the Nehru Zoological Park carried the Bibi ka Alam.

For the past four years due to court-related issues, the elephant, Rajni, has had to be replaced as permission for her participation was not issued. Organizers have been arranging for elephants from Maharashtra and Karnataka.

The practice of installing the standard dates back to the Qutb Shahi period when Muhammad Qutb Shah’s wife installed an alam in the memory of the prophet’s daughter, Fatima, at Golconda. Later, during the Asaf Jahi era, the alam was moved over to Bibi ka Alawa at Dabeerpura specially built for the purpose.

The alam contains a piece of the wooden plank on which Bibi Fatima was given her final ablution before burial. The relic is believed to have reached Golconda all the way from Karbala in Iraq during the reign of Golconda king Abdullah Qutub Shah.

The alam has six diamonds and other jewels donated by the builder of Azakhana-e-Madar-e-Deccan, Mir Osman Ali Khan. The jewellery is kept in six black pouches and tied to the standard.